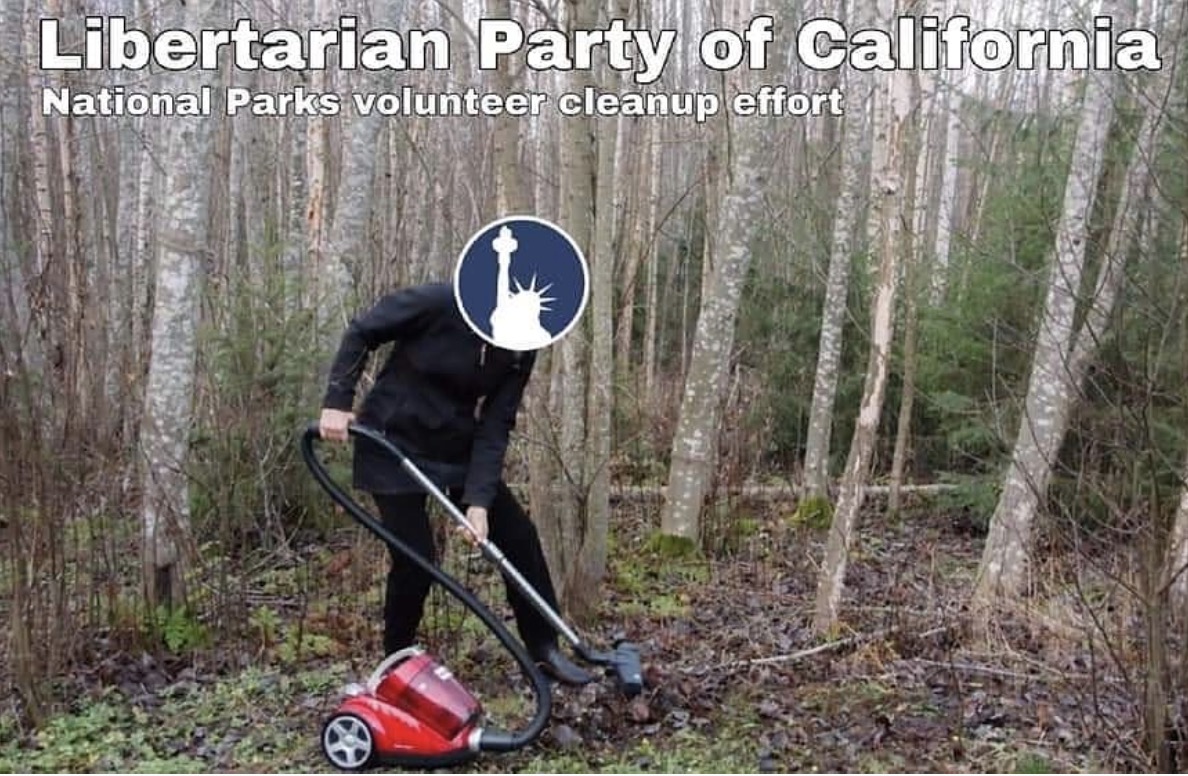 The recent government shutdown, a result of the gridlock caused by the two-party system, has had a rippling effect for the areas of the country where staff is being furloughed. However, this does not mean most places, such as our National Parks, are being closed. Great for visitors, but not so great without an organization in charge of cleaning up the mess left by these visitors. Nor is it any good for the employees and their families going without a paycheck. As a result the need for volunteerism prompted Libertarians to organize a cleanup at the National Mall and has quickly gone viral throughout the nation with many local affiliations pitching in to help their nearby National Parks! Now we’re sure this has come as a shock to those who aren’t quite familiar with the Libertarian Party, and to those who see us as only being concerned for our own wellbeing. We are so pragmatic that often times our message comes across as harsh and uncaring, which couldn’t be further from the truth. Libertarians care very deeply for our country and our fellow citizens, and we couldn’t be prouder of the members of this Party, who are rolling up their sleeves and practicing what they preach through volunteerism and stepping in to do the job the government can’t. Cleanups are being organized up and down California this weekend and Libertarians are asking for anyone interested to join in the effort — no matter your political affiliation: Mount Wanda – Contra Costa Libertarians: Saturday, January 12 and 19 – https://www.facebook.com/events/376929106186344/ Yosemite National Park – LP of Kings County and LP of Stanislaus: Sunday, January 13th – https://www.facebook.com/events/224316245123399/ Sequoia National Forest – Tulare County Libertarians: Sunday, January 13th – https://www.facebook.com/events/375179406572765/ Angeles Crest National Park – LP of LA County: Saturday, Jan. 12th – https://www.facebook.com/events/307244079998180/ For a full list of clean-up efforts across the country: https://www.lp.org/shutdown/ Remember to like, share and comment on events taking place and if you’re able to join us we’ll be happy to see you there!

A post shared by Libertarian Party Kings County (@libertarianpartyofkingscounty) on Jan 12, 2019 at 9:55am PST

In a recent Reddit AMA, Knox County mayor Glenn Jacobs argued that “Washington has too much power on our lives and spends too much money” when asked on the topic of the government shutdown. So, where does the Federal Government has so much power? Well, local Libertarian parties have been crawling out of the woodwork to show exactly where. The Libertarian Party of King’s County has been keeping the Yosemite Park clean and is “willing to pitch in as long the shutdown continues,” Kalish Morrow, chair of the LP ensured us.

15 volunteers gathered last Sunday at the local Best Buy with one goal in mind: keep Yosemite National Park clean. Upon arriving, the Park is still accessible at gate 140 (near El Portal), the rangers were pleased to welcome the volunteers.

The park is looking better than ever!

The event was a huge success. “We picked up trash along the roadways and at various spots throughout the park including the popular Bridal Veil Falls location. Thanks to the number of volunteers, as well as local business paying for garbage truck services to resume, the park is looking better than ever”, an enthusiastic chairwoman told us afterwards. “Thanks to many hands coming in and doing their part the trash situation was very sparse, which shocked us. It didn’t take us long to scout out and collect everything we could find at the various stops before moving on to the next location”.

Surprisingly, the local municipality of King’s County grew fond of the event. Even though the LP is not part of the local government, their action inspired some city officials. “Yeah. Some of our city officials seemed to have been inspired by these cleanup efforts and, though we are not affected by the shutdown, they have planned a local Cleanup Day for the city this weekend, which we will attend of course,” Morrow added.

Fight of the Duopoly

Unfortunately (?), the Government Shutdown goes into its 4th week. “People are being used as political pawns while the duopoly fight with one another. There doesn’t seem to be an end in sight, and we feel deeply for our friends and family that are being hurt by the shutdown”. However, Morrow agrees there is a silver lining within this government crisis. “Indeed. We are already seeing that volunteerism and private enterprise is acting quickly to fill the gaps and appear to be thriving – as is the case with the businesses in Yosemite – in the absence of government”.