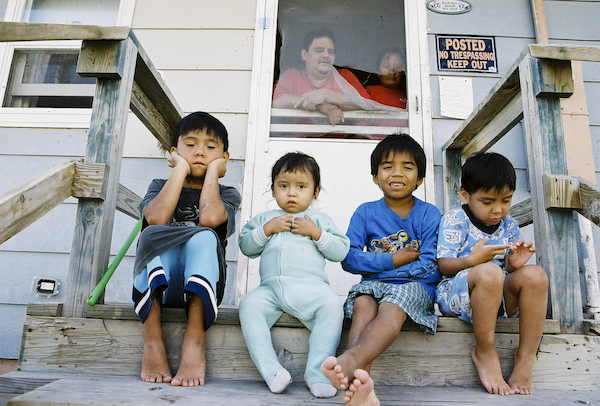 “Hearts on the Ground”

RAPID CITY, SD–The plight of Native Americans in South Dakota has gone virtually unnoticed in today’s globalized media. There are still severe problems facing the Lakota tribes of South Dakota, and finally steps are being taken to address the state’s brutal treatment of the Lakota tribes most precious resource; its children.

The Department of Social Services in South Dakota seizes young Lakota children clandestinely and indiscriminately, often while they are at school. Lakota children are ten times more likely than their white counterparts to be taken. The parents are not notified because the state claims that neither they nor the tribe need to be immediately aware of what’s happening. The parents, with no knowledge that their children have been essentially kidnapped by the state, will often begin a painful search.

The state does not take these children because of abusive parents or the presence of drugs, but because the poverty of the Lakota tribes in South Dakota is supposedly indicative of neglect. Tribal members argue that this discrimination is wrong. The hoops the DSS forces parents and grandparents to jump through to regain their children are, for the most part, impossible.

The poverty rate in Zieboch County is 87%, and jobs are hard to come by. Often the grandparents will still make staggering sacrifices in order to take the necessary steps to regain custody. Some Lakota grandparents are told that their house is too small or doesn’t meet their standards, so the grandparents take out loans to get a larger one. If their house is acceptable, grandparents are told that they are too old, or that a crime they committed decades ago disqualifies them. They are illegally denied a South Dakota foster license, and are therefore not allowed to take care of their own grandchildren.

Arlan Lee, a Lakota and former DSS worker, witnessed firsthand how the law favored the Lakota children being separated from their culture and placed with white families, or worse, locked in group psychiatric facilities. This is against Federal law. Under the Indian Child Welfare Act, which was passed in 1978, states are required to take “active efforts”, to reunite Native foster children with their extended family or tribe.

Yet every day, children continue to be taken.

This is sadly not an entirely new concept to the Lakota. Ever since their ancestral lands were assumed by the government, the rights of the Lakota have been trampled upon. Forced assimilation and genocide were rampant in the early 1800’s. Lakota children were often forced by the state and missionary organizations into boarding schools, where the motto was, “Kill the Indian, Save the Man.


This abusive and ultimately unlawful epidemic appears to have a major financial incentive for the state. Each year, $100 million in federal funds flows into the state economy to fund state foster care. One Lakota child in state custody can bring up to $79,000 in federal funds to the state.

For all these funds poured into the foster care system, the level of care these children receive once they’re in state custody is deplorable. Lakota children are often forced to imbibe a cocktail of prescription drugs to keep them complacent, and are told they are in state care because their parents no longer wanted them. Once they reach the age of 18 and leave the foster care system, they’re often at a loss for how to cope. By age 20, over 60% of foster children who age out of the “system” are homeless, in prison, or dead. The suicide rate for the Lakota children is twelve times the national average.

Now, there appears to be some hope that these unlawful kidnappings can finally come to an end. In 2005, the Lakota People’s Law Project was founded with the sole objective to stop this cycle of tragedy. While the state continues to make false claims that there aren’t enough native homes to place these children, the people at the Lakota People’s Law Project discovered that if grandparents weren’t illegally denied the opportunity to care for these children, there would be plenty of Native foster homes. There are nine Lakota reservations, and only one has its own tribal foster care program. Sissteon reservation places over 98% of their foster children into Lakota homes, usually with relatives.

The Lakota are seeking tribal sovereignty to gain foster care programs run by and for the Lakota. This initiative has already gained over 23,000 signatures on MoveOn.org, and would transfer the funding the state receives to the tribes directly to develop and provide their own child and family services. To learn more about what the Lakota tribe is currently facing, watch the short documentary below, or visit LakotaLaw.org

Widow Being Evicted for Living off the Grid (VIDEO)