The Libertarian Party of Ohio was duped by the Johnson-Weld campaign, and I got to experience it. I am not writing this to disparage the Ohio party or its members. I have met some amazing people, who I feel are not only assets to the LPO, but to the nationwide liberty movement.

I am writing this, because the LPO has some problems, particularly with some people who hold power in the party.  I am writing this for those in my state who feel their voices have been silenced, because simply put, mine will not be.

In late 2015, I decided to attend the Libertarian Party’s national convention in Orlando, Florida. I had planned to just go and check it out as a regular attendee. When a good friend of mine heard I was attending, they convinced me that I should try to attend as a delegate from Ohio. I applied, and I eventually ended up on the list of delegates for the convention.

I knew going into it that the LPO was made up of a lot of Johnson-Weld supporters, but I had no idea some in the party would end up seemingly working to throw the state’s delegation to the campaign. I personally didn’t really care for political parties. I only joined the LP because I was sure it would be different than others. Unfortunately however,  I found out that many still wanted to play the same game, making deals to advance their personal agenda, not principles.

Before we even got to voting day, I was pulled aside by people at the convention who told me that I needed to vote for the Johnson-Weld ticket. However, I would not budge from my unabashed position supporting another candidate. And I could not believe what happened when we sat down with the delegation and prepared to vote.

When I got to my seat, and got settled in, there was a young man putting Johnson-Weld buttons in front of each seat. I thought nothing of it, because there was plenty of signage, literature, and buttons already sitting on the tables. However, he then sits down at the table, just two seats down from me, and casts his ballot. Slightly confused as I did not recognize him as one of the delegates, I was left to wonder, “Where did this guy come from, and is he really part of the delegation?” After the votes are tallied, our party’s vice-chair at the time, now chairman, Scott Pettigrew, confirms that there was indeed someone who voted who was not part of the delegation. However, they claim that because they had already tallied the votes that they weren’t going to do anything about it.

That was sketchy enough on its own, but it wasn’t the only thing. As the voting cards were being handed out to the delegates, the vice-chair was making it clear to us all that the Johnson-Weld campaign would be giving our state party $20,000 to help with the terrible ballot access laws we have to contend with in Ohio.

It was presented in a way that led me to believe this deal was contingent on both Johnson and Weld winning Ohio. And sure enough, both candidates would win the state.

I wish I could tell everyone all of the wonderful things that my party is doing with the $20,000 we received from the campaign. I wish I could talk about how we toppled the draconian ballot access laws Gov. John Kasich and the Ohio Republicans have restricted us with. Unfortunately, I cannot, because Ohio never received the money we were promised.

Instead, we didn’t even have the opportunity to vote for a Libertarian in Ohio. Sure, Gary Johnson and Bill Weld were on our ballots, but as independents. Our party was not represented, so our ballot access struggles continue in the state.

Campaign manager Ron Nielson shook hands with Mr. Pettigrew on this deal. Then he later denied that the deal ever happened, and if it did then he wasn’t sent an invoice. An odd circumstance, since The Libertarian Republic obtained a copy of the invoice that was sent via a source close to the leadership in the LPO.

Below are screenshots of a conversation with a former high ranking member of the Libertarian Party of Ohio, as well as a copy of the invoice sent to the Johnson-Weld campaign: 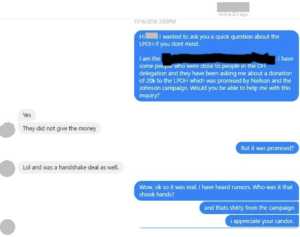 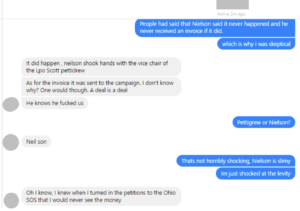 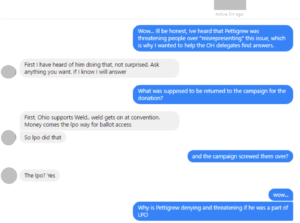 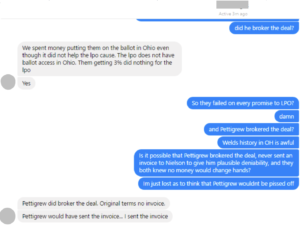 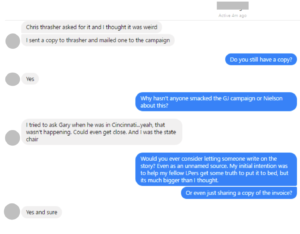 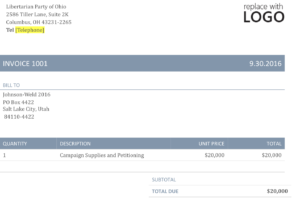 To me this whole situation further confirms what I believed to be true in Orlando. Gary Johnson and Bill Weld merely wanted to use the Libertarian Party as an easy path to get on the ballot. Unfortunately, the members of this party were so enamored by the resumes of two politicians that they threw away their principles and message. All of that because they thought we might have a shot to be just like the two parties they despise. Well, we’re closer to that than ever, but with a possible setback to our principles and messaging.

Whether the fault lies with the Johnson-Weld campaign or with some of the leaders of the LPO is something we can all have a discussion about. The bigger point is about the dishonesty and “politics as usual” being peddled to the members of this party.

We cannot continue to claim to be the “Party of Principle” if we can’t all hold each other to it. That’s why you’re exclamations of “That was 2016!” or “Just let it go!” will hold no water with me. When I joined this party, I expected more out of it. I expected to draw people in by standing on our principles, even when it got tough. At best, the party put their faith in a campaign that lied through its teeth, but at worst, the LPO has people holding some sort of power that are willing to throw the party under the bus to broker deals for personal gain and convenience.

Members of the Libertarian Party across the country dream of playing in the big leagues one day. This I know for sure: Showing your members that the party and/or its candidates cannot be trusted is not the way to get there.

The views expressed in this editorial are those of the author and are not representative of The Libertarian Republic or it’s writers.

Maybe Paul Manafort Did Work For Putin After All 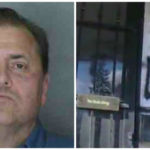 Police Accuse Man Of Spraying His Own House With Swastikas