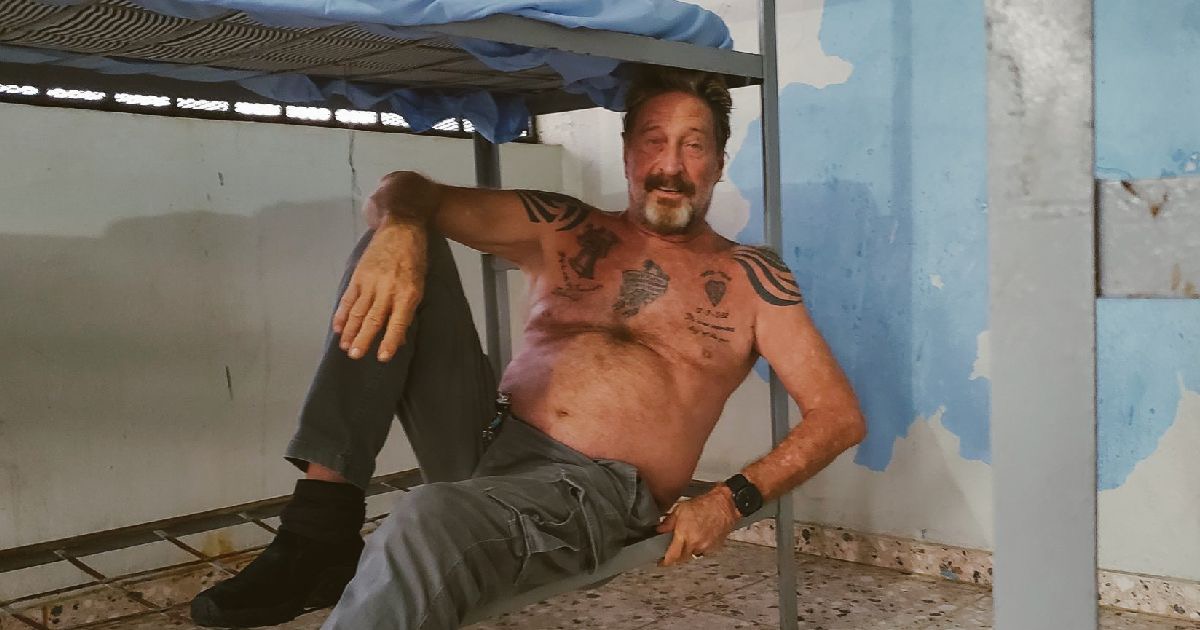 John Mcafee has finally been captured! And released. Twice this week.

The saga of John McAfee has been a long and strange one, rife with plot twists and intrigue straight out of a whodunit mystery or spy thriller. From mega millionaire software developer to alleged gunrunning international murder suspect and crypto advocate, John has succeeded in becoming what many Hollywood icons only play at being.

An international man of mystery.

John’s current saga began in Belize back in 2012 when his home was raided by the police. Later that same year, he was the person of interest in the murder investigation of his neighbor.

In December of 2012, the month following this murder, Vice disclosed his location in Guatemala via the release of a photo with his geolocation still attached. He was subsequently arrested for illegally entering the country.

Following a failed bid for asylum, McAfee went on the run, leading authorities on an international chase from the state of Tennessee to the Dominican Republic and Cuba.

John has consistently denied being guilty of anything except tax evasion (and being the father of a very impressive number of children, 47).

Since January of this year, McAfee has been living and running for the Libertarian presidential nomination mostly on his boat in international waters following the latest refusal to dismiss wrongful death charges back in November by the Florida Circuit Court.

This latest chapter took a bad turn in the Dominican Republic when he was detained and then arrested on weapons charges earlier this week.

Before McAfee’s whereabouts were known, Rob Benedicto, his campaign manager, tweeted from McAfee’s Twitter account, “If John misses his next check-in, events will be set into motion that I cannot prevent once they have begun. John has secreted data with individuals across the world. I know neither their identities or locations. They will release their payloads if John goes missing.”

(3/4) If John misses his next check-in, events will be set into motion that I cannot prevent once they have begun. John has secreted data with individuals across the world. I know neither their identities or locations. They will release their payloads if John goes missing.

The next day, McAfee tweeted that they had been released from detention, but not for long.

Leaving detention (don't judge my looks – four days of confinement). I was well treated. My superiors were friendly and helpful. In spite of the helpful circumstances, we've decided to move on. More later. pic.twitter.com/V4539uYCHR

“My second arrest in one week. A record, I think.” John observed of his recent days, indicating he had been arrested an subsequently released twice.

My second arrest in one week – a record I think. pic.twitter.com/wOQ99nWGYC

John expressed his intent to vacate the Republic as soon as possible in spite of otherwise helpful accommodations. They are currently in England, where he has expressed interest in an attempt to campaign for Prime Minister.

Can a person run for, and be, President of the United States and Prime Minister of Great Britain simultaneously? Yes. Absolutely. Without question. But I believe I am one of the few people stil alive who could qualify for the combined position. pic.twitter.com/953oWjhyHu

We are in london. A different world from the Chaos of the D.M. Tomorrow I will lay out how an extremely corrupt Bahamian Official orchestrated our ordeal, with the help of the CIA. I will bring him down first, then decide what to do next. Full videos, texts and voice recordings. pic.twitter.com/ruyB0FOir2

According to John, the entire ordeal was a case of mistaken identity.

Is a Libertarian Utopia Possible?