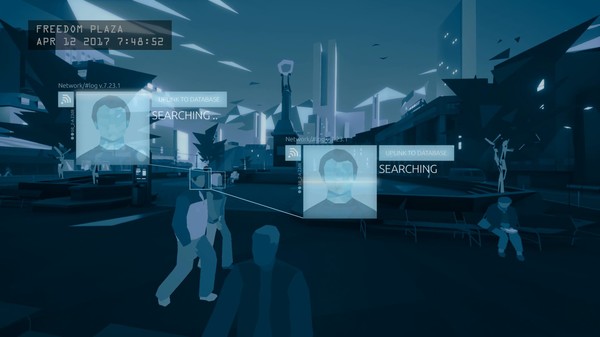 Kotaku brought the game Orwell to my attention today. It’s a game about spying on people’s personal data in order to ascertain potential terrorist activity. Your end goal is to thwart that activity. The point of the game, in addition to being an entertaining pot boiler, is the fundamental question of when, and if, it’s okay to violate the privacy of human beings in order to prevent acts of terror. This is a wonderful concept and one I support fundamentally as a gamer and fan of thinking critically while playing them.

The point of the article was the question if people today even “care” about privacy. The most popular comment on the article?

I don’t care. I mean first off what can we do to stop them from spying on us? Nothing. Even if we did complain they could say they stopped but keep on spying anyways.

Sorry, I just threw up in my mouth a little. In 2013 we learned the NSA was in our business. Directly or indirectly, the fact of the matter was the NSA was gathering massive amounts of data on Americans, foreigners, and scorned lovers.

It’s possible you’re much like the commenter above and didn’t care. You had nothing to hide and are perfectly okay with invasions of personal privacy and personal data in the name of security.

But it’s also possible you’re a principled individual and don’t think the constitution should be violated ‘just in case’ you’re up to no good.

The beauty of Orwell is that it could change your mind one way or another. Unfortunately, as a Mac user, I am unable to play Orwell, but I support it on principle.

A game I did play, that “did” change my mind, was Tom Clancy’s “Splinter Cell: Blacklist.” Released in August 2013, a few months after the scale and scope of the NSA’s activities were revealed.

The backlash to these activities was massive. But along comes “Splinter Cell.” Without trying and without foreknowledge of this event, it made quite a case in favor of a bit of privacy invasion. Of course the reviewer of the game disregarded the plot as “Right Wing” mumbo jumbo on a podcast.

But it was mumbo jumbo with a point. “Splinter Cell: Blacklist” is a game that demonstrates the awesome force of the Military Industrial Complex. From wire tapping to drone strikes to covert operations to warrantless searches and seizures – it demonstrated what a single team of highly qualified individuals were capable of when they *weren’t* restrained by the bureaucracy of the federal government and the more…limiting aspects of the Constitution (and The Bill of Rights in particular).

Obviously it was just a game, and not based on fact although some of the technology is quite believable in hindsight. But the point it makes has real world applications; Just how many times have lives been saved by illegal wire tapping and covert operations we never hear about? We’ll never know.

How many lives make that violation of privacy worth it? Batman seems to think it’s about two boatloads.

The Libertarian in me says no lives are worth it. That the fundamental cost of liberty is that the federal government shouldn’t be in the business of convicting people for crimes before they’re committed and spying on them, again ‘just in case’.

If we’re willing to violate the privacy of lives to save lives, those lives aren’t worth as much as we initially thought, are they?

In playing “Splinter Cell,” you realize America is embroiled in a war with a stacked deck. The enemy doesn’t obey the laws of combat. They fight dirty and they fight mean and they behead journalists, use children as suicide bombers, and drag bodies through the street. As a result, if we fight the war as governed by the Geneva convention, we’re essentially playing checkers while the enemy is playing tackle football.

Games have an amazing capacity to educate while entertaining. Unlike a movie you watch, or a book you read, you participate in a game. And the best of them, from “Oregon Trail” to “Splinter Cell” to even “Madden Football,” can enlighten you on a subject in a way no other media can.

Regarding the NSA? I still don’t know how I feel. There’s valid arguments on both sides. I lean toward getting the government out of my computer.

Then again, I have nothing to hide.

You can read my full review of Splinter Cell: Blacklist here.

You can read about Orwell here

Obamacare Lite’s Individual Mandate: What You Need to Know