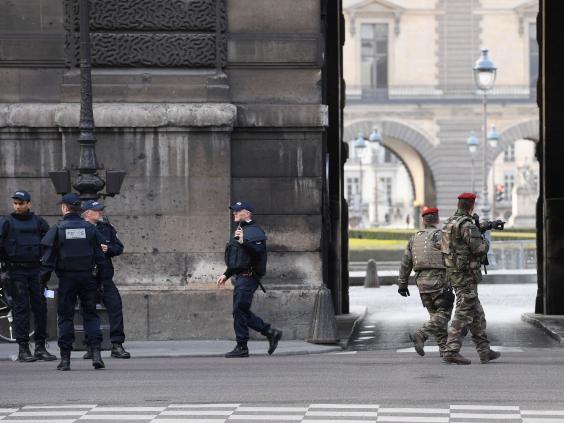 A French soldier prevented a terrorist attack on the world famous Louvre Museum in Paris after a knife-wielding man shouted, “Allahu akbar.”

French outlet BMF TV reports the man tried to enter the shopping center at the museum with two briefcases. He pulled out two machetes when he was refused entry and attacked a soldier, shouting, “Allahu akbar.” Another soldier responded by opening fire.

Prime Minister Bernard Cazeneuve said the attack was “clearly of a terrorist nature.”

The attacker was seriously injured from five shots to the legs and stomach. The soldier was injured his arm during the incident.

Police Chief Michel Cadot later revealed the briefcases were empty. The museum, most famous for being the home of Leonardo da Vinci’s “Mona Lisa” portrait, closed and kept 200 visitors on lockdown while the security situation was figured out.

France has been on a state of emergency since the Nov. 13 attack in Paris, which killed 130 people. Thousands of soldiers patrol popular tourist attractions such as the Louvre to prevent further attacks.

A total of 230 people have been killed in terror attacks in France since the start of 2015.