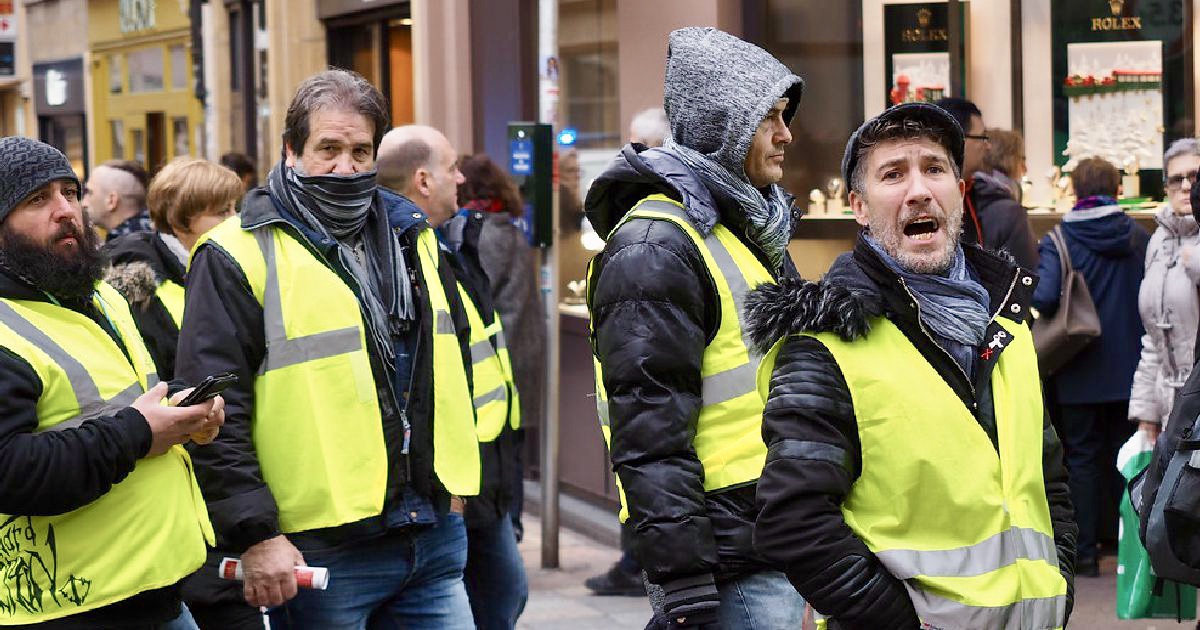 “I see my hand and scream in horror as it hadn’t completely come off, it was hanging from my wrist, with the bones completely exposed.”

A young man who has taken part in the yellow vests protests in France tells his story as he shows The Guardian cameraman the stump of his wrist, a testament to the violence of the clash between police and protesters.

Another who lost an eye during a protest says despondently, “I no longer believe in freedom.”

Protests for economic justice and tax reforms first started in France in October 2018, and they continue to the present. Sporting yellow vests, the participants have paraded in the streets, issuing a number of demands to French President Emmanuel Macron. Tensions have escalated, and these protests have often turned violent, with thousands having now been injured and several killed.

The Yellow Vests (gilets jaunes) have become a symbol of anti-government protest, with the people of each of at least 26 countries—from Australia to Canada—appropriating it for their own purposes and demands.

Recently, in an act of solidarity with the protesters in France, a letter defending the Yellow Vests’ legitimacy and desires was signed by a number of actors, writers, musicians, and filmmakers and published in the French paper Liberation on May 5, 2019.

The letter ended with a quote from John Lennon:

But What Is Justice?

The Yellow Vests in France have risked—and in some cases lost—life and limb in pursuit of “economic justice.”

But what does “justice” mean to them?

In 1850, Frédéric Bastiat’s political theory was published in his work The Law. In this work, the Frenchman vigorously challenged what he believed to be a perversion of the real meaning of law and justice and called on his countrymen to seek true liberty that leads to prosperity.

For the sake of brevity, his work can be distilled down to a few basic points in question-and-answer format:

Q. What is the purpose of law?

Q. What is justice?

A. Use of the collective force (law) to secure persons, liberty, and property, maintaining each in its right.

Q. What is the perversion of law?

A. Legal plunder and any use of force for reasons beyond the purpose of securing persons, liberty, and property.

Q. What is legal plunder?

A. Use of the collective force (law) to take the property of some persons to bestow it on others.

Q. What is the outcome of a government that persists in legal plunder?

A. A discontented populace ready for revolution.

Bastiat argued that a government has but three choices regarding its relationship to personal property rights:

1. The few plunder the many.

2. Everybody plunders everybody else.

We must make our choice among limited plunder, universal plunder, and no plunder. The law can follow only one of these three.

How do you know if your government practices legal plunder? He answers:

See if the law takes from some persons what belongs to them, and gives it to other persons to whom it does not belong. See if the law benefits one citizen at the expense of another by doing what the citizen himself cannot do without committing a crime.

In other words, if it would be a crime for me to enter your house and demand your money at the point of a gun so I can share it with the “poor,” there’s nothing that magically makes this moral simply because it’s done by a man wearing a badge.

This means that plunder is ethically and morally wrong regardless of whether or not it is made legal under the auspicious but ambiguous rationale that it’s “for human flourishing.”

Bastiat came to a simple conclusion: economic justice means that my property is safe from the looting hands of any individual or collective entity—including government.

A person free from plunder is free to prosper.

Now, which of the three choices—limited plunder, universal plunder, or no plunder—are the Yellow Vests pursuing?

We know it is not the absence of plunder. While protesting taxes, they have simultaneously demanded that the government abolish homelessness, increase the minimum wage, provide free parking in the city center, give a minimum pension equal to $1,369.46 US dollars, raise taxes on big companies, etc.

So they are actually demanding that the government engage in more of that which caused outrage in the first place: raising taxes in order to take care of everyone and comfortably accommodate everyone’s desires.

What they mean by “economic justice” is equality through legal plunder.

They don’t want less government or less taxation; on the contrary, their demands for concessions and favors that must be supported through legal plunder have only increased. Their protest is over having to help foot the national bill.

As of April 2019, Macron has vowed nearly $19 billion (in US dollars) in raises and tax cuts. But their demands are far from satisfied. Because the proper purpose of the law is not widely understood, legislation often is, as Bastiat put it, “the battlefield for the fantasies and greed of everyone.” Even where motives are entirely innocent and praiseworthy, men seek the remedy to inequality by “increasing and perpetuating the very thing that caused the evil in the first place: legal plunder.”

The hard reality is, the government can’t deliver.

Nor should it try.

Bastiat argued that for the government to organize charity, it would have to disorganize justice. He observed that the natural consequences of making the government responsible for everybody’s wellbeing and happiness are a litany of complaints, discontent, and unrest tending to violence and revolution.

Thus, there is not a grievance in the nation for which the government does not voluntarily make itself responsible. Is it surprising, then, that every failure increases the threat of another revolution in France?

A Dream Worth Dreaming

Bastiat believed that men would prosper and inequalities would be minimized if they pursued justice (security of person and property) and liberty.

A nation free from plunder is free to prosper.

In order to realize true economic justice, the Yellow Vests this whole world over—and indeed, every individual in every land who desires justice—should pay heed to the timeless wisdom of Frédéric Bastiat.

And now that the legislators and do-gooders have so futilely inflicted so many systems upon society, may they finally end where they should have begun: May they reject all systems, and try liberty; for liberty is an acknowledgment of faith in God and His works.

Tabitha Alloway is a liberty-loving wife, mom-of-three, and electrician who enjoys writing and studying political philosophy.

Medicare for All Would Eliminate Americans’ Choices in Health Coverage

Has the educational system become worse over the years?