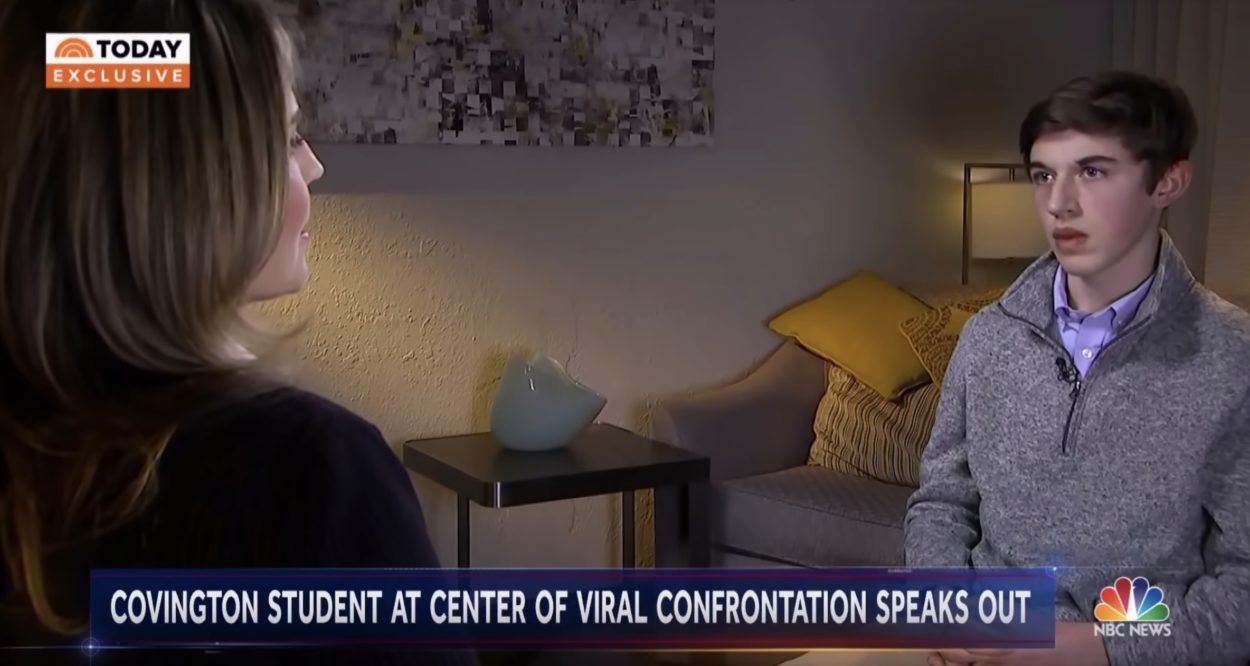 On Wednesday, January 23 NBC released an exclusive interview with Nick Sandmann, the kid at the center of the Covington Catholic story.

The video starts with Savannah Guthrie, who conducted the interview, stating, “In the past few days NBC News has sat down with Nathan Phillips three times and heard his side of the story” Nathan Phillips is the Native American at the center of the story, she continued “Now for the first time this 16 year old is saying what he saw”

Sandmann claims “As far as standing there I had every right to do so. I respect Mr Phillips, I’d like to talk to him. I mean, in hind sight, I wish I had walked away and avoided the whole thing, but I can’t say that I am sorry for listening to him stand there.”

Guthrie then asks “What’s it like to be at the center of this storm?”

Sandmann replies “Well it’s wierd to see your face on television. I have been reading a lot, and I have also gotten a lot of messages from people for support and also hateful things.

Sandmann also details what the Black Hebrew Israelites were saying, and how it made him feel, “They started shouting real homophobic, racist, derogatory comments at us” Guthrie asked what they were calling them, to which he said “They called us incest kids, biggots, racists, f****ts.” Sandmann also said he “Felt threatened” and “They were a group of adults and I wasn’t sure what would happen next”

When asked, “Did anyone shout any insults or racial slurs back at the group?” Sandmann says, “In hindsight I wish we had find a better spot to wait for our buses, but at the time being positive seemed better than letting them slander us with all of these things, so I wish we had just walked away.” He also said, “We are a Catholic school, they don’t tolerate racism, and none of my classmates are racist people.”

After asked about Phillips, who walked between the students and the protesters, Sandmann says “At first we were unsure of whether he was trying to join in and drum to our chants, or what he was doing”-“I am not sure where he wanted to go, and if he wanted to walk past me I would’ve let him go”

“What was going through your mind in that moment?”

“I wanted the situation to die down, and I just he wish he would have walked away. I knew as long as I held my composure and didn’t do anything that he might perceive as aggressive, or an elevation in the conflict, that it would eventually die”

“Why didn’t you walk away”

When asked about his infamous smile, Sandmann says “I see it as a smile saying, this is the best you are going to get out of me. You won’t get any further reaction of aggression, and I am willing to stand here as long as you want to hit this drum in my face.”-“People are judging me based off of one expression, which I wasn’t smirking, but people assume. They have gone from there titling and labling me as a racist person, saying ‘That’s disrespectful to adults.’ They had to assume so many things to get there, without consulting anyone that can give them the opposite story”

Guthrie then asks about the “The other perspective. In other words there are a lot of you, a handful of the others. Do you think they might have felt threatened by a bunch of young men beating their chests?”

Sandmann answered, “I mean I certainly hope they didn’t feel threatened by us. I would just say that the fact that remains that they initiated with us, and they provoked us into a peaceful response of school spirit”

Guthrie mentions “There is something aggressive about standing there, standing your ground. You both stood your ground, and it was like a stare down. What do you think of that now, when you think about that moment?”

“I would say Mr. Phillips had his right to come up to me, I had my right to stand there. Our school was slandered by the African Americans who would call us all sorts of things.”

When asked “Do you think if you weren’t wearing that hat this might not have happened, or it might have been different?” Sandmann said “That’s possible, but I’d have to assume what Mr. Phillips was thinking, and I’d rather have him speak for why he came up to us.”

Sandmann also relayed what the attention has done to him, “It’s been terrible, people have threatened our lives”-“I have the utmost respect for Mr. Phillips, he’s another person that freely used his First Amendment Right. I’d like to thank him for his military service as well, and I’d certainly like to meet with him.”

I highly recommend watching the full interview yourself, as I can not portray the fear this poor kid has in his voice through my writing.

Is Your Teenager Using Drugs Or Alcohol?