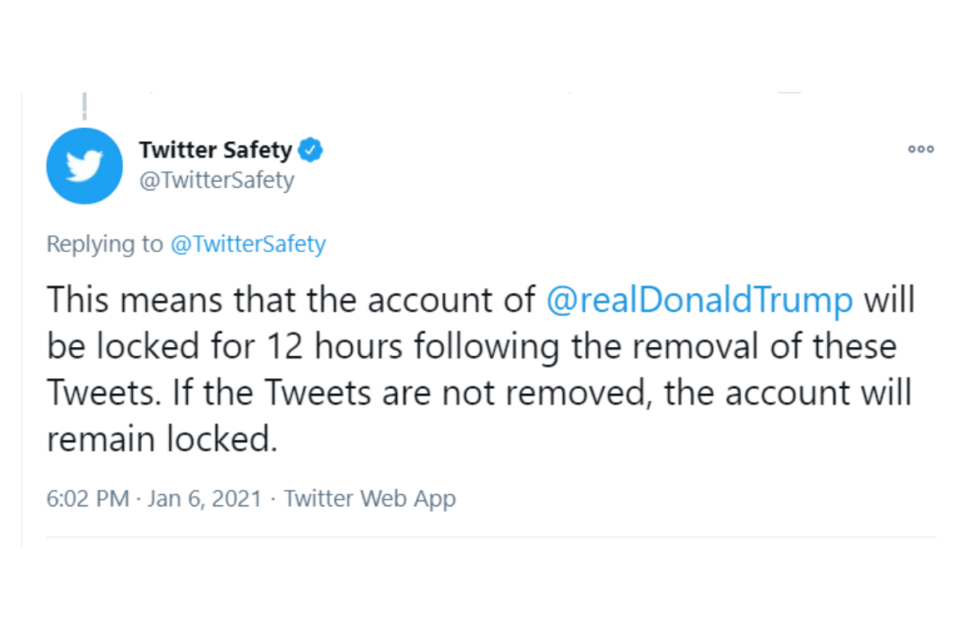 As Congress convened to count the electoral votes and confirm the election of Joe Biden as the 46th President of the United States, supporters of the President gathered outside the Capitol for a Save America March. The president himself headlined the event hosted by Women For America First. Trump has continued to insist that he won “by a landslide”, pressuring legislators and Vice President Pence to overturn the election.

The rally took an ugly turn as protesters stormed the steps of the Capitol, assaulting police, and breaking into the Capitol building. Legislators and staff were evacuated as the rioters broke into the House chamber and other areas, including Speaker Nancy Pelosi’s office.

Just evacuated my office in Cannon due to a nearby threat. Now we’re seeing protesters assaulting Capitol Police.

This is wrong. This is not who we are. I’m heartbroken for our nation today. pic.twitter.com/jC9P0YfSLQ

BREAKING: revolution in process as Trump supporters break into the Capitol building, attacking police, breaking windows, and knocking down doors

The people have pushed through & are storming to main chambers pic.twitter.com/NW6VDDNBQw

Several lawmakers called for the President to make a statement, including Texas Congressman Chip Roy, who tweeted, “Mr. President – get to a microphone immediately and establish calm and order. Now. And work with Capitol Police to secure the Capitol. It’s the last thing you’ll do that matters as President. …”

Mr. President – get to a microphone immediately and establish calm and order. Now. And work with Capitol Police to secure the Capitol. It’s the last thing you’ll do that matters as President. @realDonaldTrump @MarkMeadows

The President continued to tweet, calling for peaceful protests while continuing to refer to the “stolen” election. Twitter responded with warnings on the tweets, followed by deleting them and locking the President’s account for 12 hours.

This means that the account of @realDonaldTrump will be locked for 12 hours following the removal of these Tweets. If the Tweets are not removed, the account will remain locked.

Future violations of the Twitter Rules, including our Civic Integrity or Violent Threats policies, will result in permanent suspension of the @realDonaldTrump account.

The following are three of the deleted tweets, including a video message the President recorded, addressing the protesters. 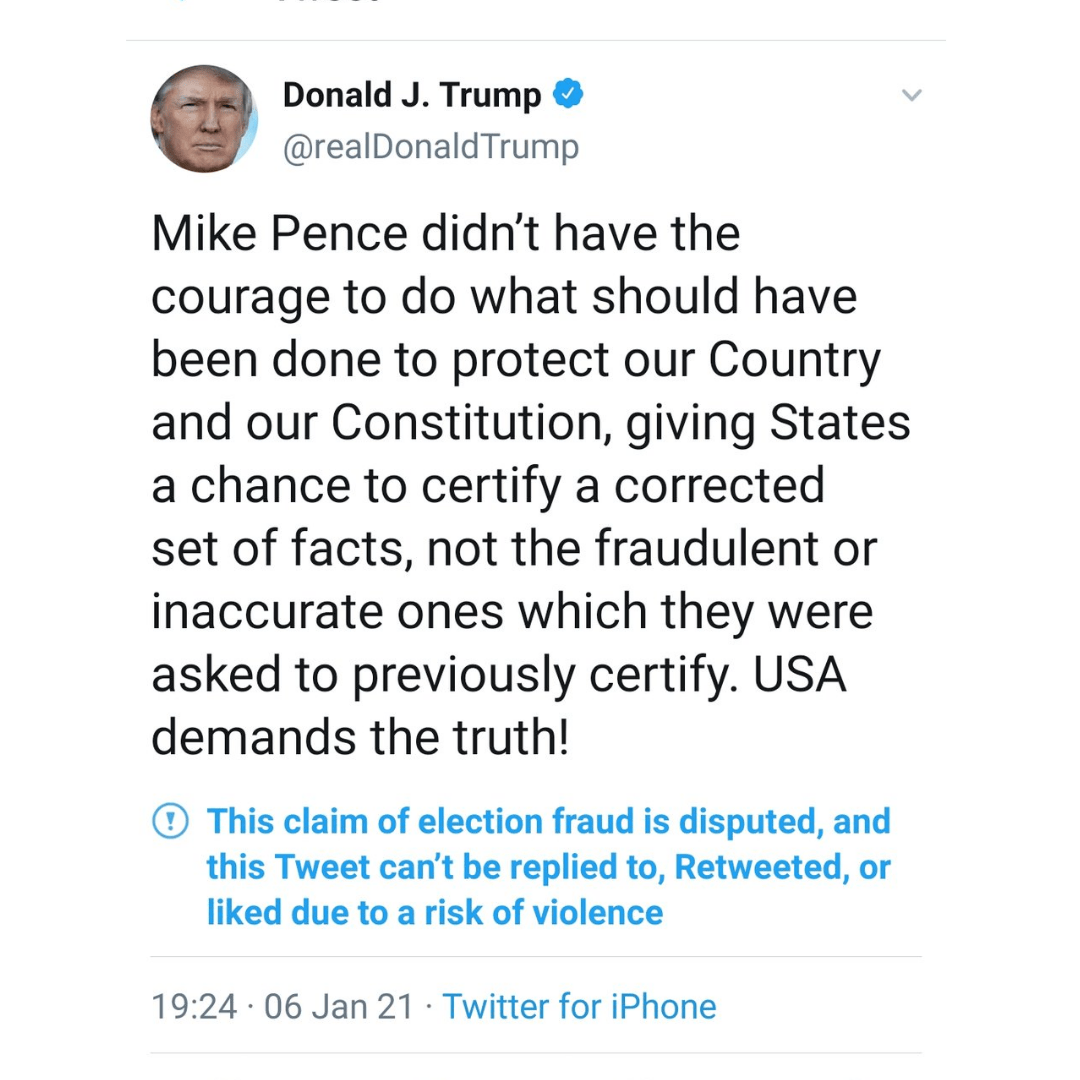 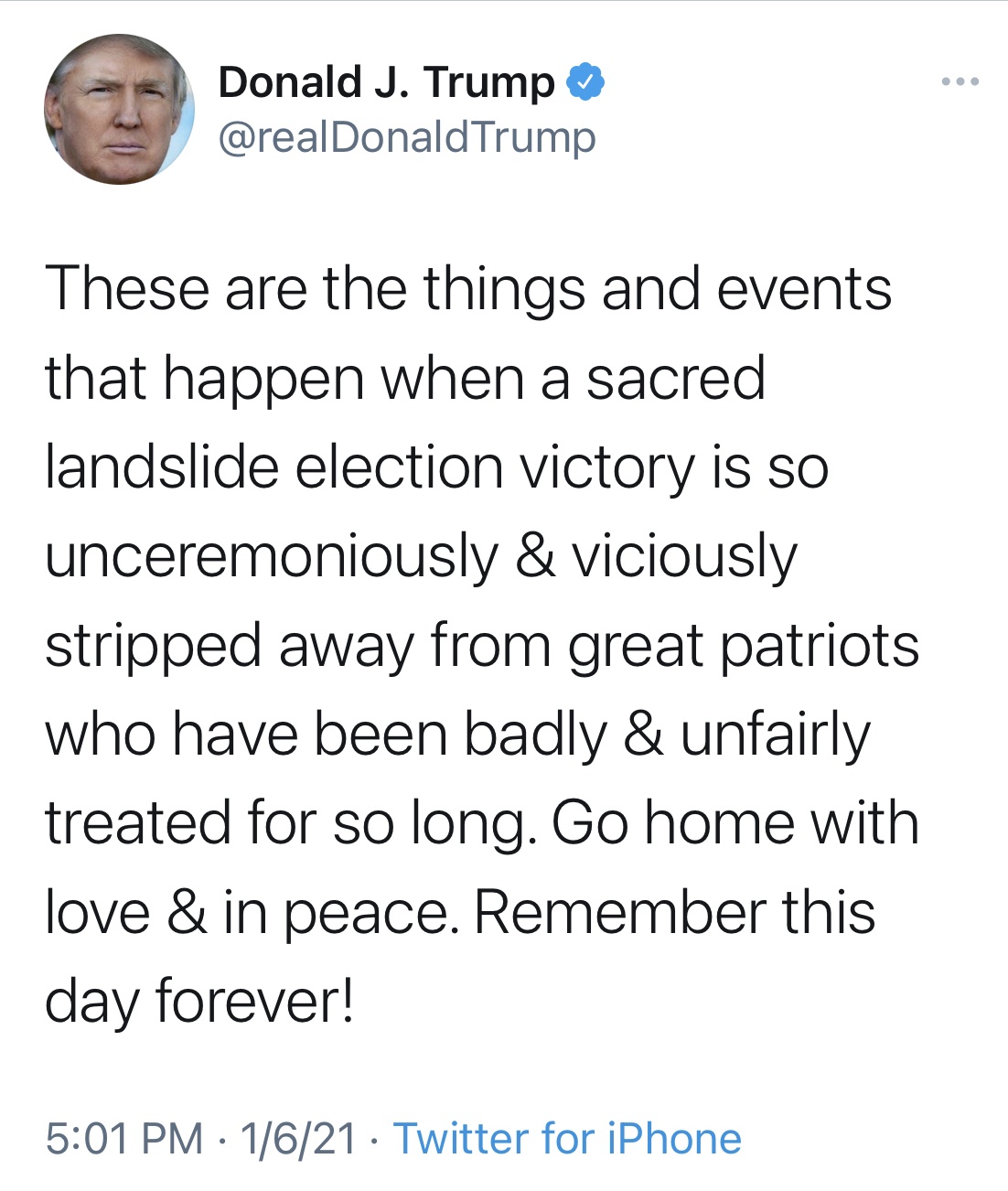 Earlier, Ivanka Trump also tweeted, calling for a stop to the violence, but promptly deleted it after she was questioned for calling the protesters “Patriots”.

Ivanka Trump addressed the rioters as "American Patriots" in a tweet, then deleted it https://t.co/lJvkzNsi1e pic.twitter.com/qSH3T9I5gc

No. Peaceful protest is patriotic. Violence is unacceptable and must be condemned in the strongest terms. https://t.co/GwngZTqzTH

As of 9:00 p.m., the building had been cleared and Congress reconvened to continue the counting of the electoral college ballots.

More scenes from the riots inside the Capitol:

That’s the confederate flag flying outside the Senate chamber pic.twitter.com/1XB5TlAsuv

Guns drawn at the door. https://t.co/XHCa4BkUNn

Photo inside the House chamber.

Via Getty, one the rioters steals a podium from the Capitol pic.twitter.com/V4spojl40q

How the Oros Effect is revolutionising the world of remote work