Things You Can Do With a Nursing… 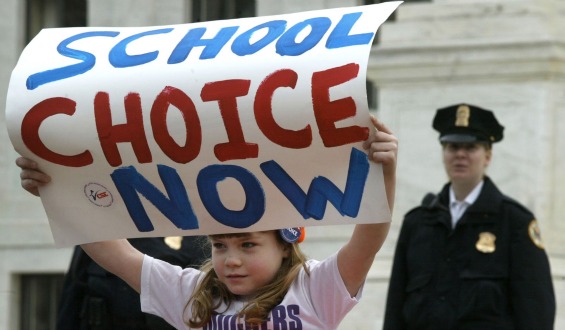 While the commentariat focuses on flattened statues, defaced property and violent interactions among protestors and police, there has been relatively little attention given to the solutions that could address many of the problems—both perceived and real—threatening to drive Americans further apart.

One of those problems is the failure of government-run schools to provide a quality education to millions of kids. There are no silver bullet solutions to society’s social problems, but education reform is perhaps the closest we have.

If reformers want to make strides against structural racism, they should start by empowering families—of all colors—to choose the school that best fits their child’s unique needs.

Before I explain why, it’s important to define the term structural racism because it tends to upset people of different political persuasions for a variety of reasons. Professors Gilbert C. Gee and Chandra L. Ford of the UCLA Fielding School of Public Health note that structural racism is defined as “the macrolevel systems, social forces, institutions, ideologies, and processes that interact with one another to generate and reinforce inequities among racial and ethnic groups.”

In other words, structural racism isn’t necessarily the product of intentionally racist acts, which should disarm those who take offense when people use the term to describe particular societal outcomes. Nevertheless, no one should tolerate a system that disproportionately fails people of any race, even if the failures are the result of inherent flaws—like poor incentives created by education monopolies—rather than racist behavior.

An objective look at the efficacy of government-run schools shows a major performance gap among students of different races. According to the Nation’s Report Card, 8th grade white students score higher than both black and Hispanic students in reading and math. Though achievement levels are still far too low for students of all races.

The same trend is prevalent in graduation rates. The National Center for Education Statistics places these rates for whites, blacks and Hispanics at 88.6, 77.8, and 80 percent respectively. Such outcomes lend credibility to the idea of structural racism—and how it sets back millions of kids in their pursuit of happiness.

One excuse offered in defense of government-run schools is that they’ve been underfunded for decades. But as Corey DeAngelis and Matthew Nielsen document, education spending has risen by an inflation-adjusted 280 percent since 1960. The average government-run school spends $15,000 per student. In my state of New York, spending reaches more than $24,000 per student. Yes, money matters, but more spending is not correlated with higher student achievement.

Still, calls for more education spending persist, which is odd as the money requested would be used to prop up an education system that disproportionately hurts people of color. Critics may reply that more money would address rampant inequities, but there’s plenty of evidence to suggest otherwise. Plus, after decades of failing students, why should more spending be diverted to prop up a failing system?

Instead of waiting years, even decades for structural changes, parents should be free to immediately remove their children from the current educational system and choose the school that is the best fit for their child. This could transform education overnight. And it would provide a much-needed safeguard against the painful consequences of the failure of government-run schools.

The benefits of school choice are enormous. Dozens of studies have demonstrated positive effects on issues ranging from student test scores to education attainment to parental satisfaction. This shouldn’t come as a surprise as parents and guardians are better equipped to determine the best ways to educate their children when compared to the people in charge now: distant politicians and bureaucrats.

School choice can be a lifeline for students and families. If we want to have an honest conversation about race, people on all sides of the debate need to acknowledge the burdens carried by those stuck in unsafe and underperforming schools. And why bigger government isn’t the solution to their problems.

Sleep Deprivation: How It Affects Our Mood and Health

Want to Resize your PDF Files with EasePDF? Look Here!