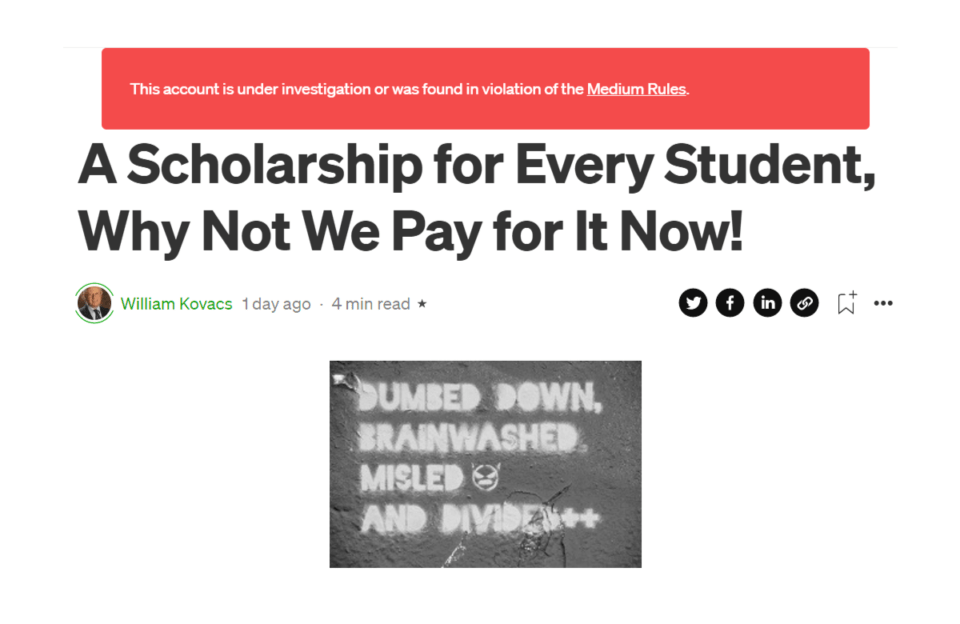 On November 29, 2021, I published an article on School Choice in the online publication Medium. Its focus was how the United States (local, state, and federal governments) spends more money on K-12 public school education than it would cost to give a full scholarship to every K-12 student in the nation—public and private.

The next morning, I awoke to a bright red banner across the top of my article informing me and my readers that the article was “under investigation or found in violations of the Medium Rules.” The graphic accompanying this article is a snippet of Medium’s post on my page. The next day, Medium’s bright red notice of violation was on all my articles.

The issue is not whether my articles appear in any specific publication. That is an irrelevant concern. The issue is about the message Medium and other social media corporations send to the public when they censor.

The communications genius, Marshall McLuhan prophetically noted in 1964, “The medium is the message.”

McLuhan asserted a communications medium is not neutral. While the medium delivers content, it also has a character that is usually overlooked. The character delivers notice of a long-term structural, social change. He gives the example of a news story about crime. McLuhan explains the story is less about crime than bringing the crime into homes to create fear and change public attitudes about crime. Since the public focuses on the content of the story, it, many times misses the subtle attitudinal changes the medium’s character is foisting upon society. As to social media, the character of its long-term message is to change public attitudes about speech it finds objectionable and to foster an acceptance of censoring such speech.

Today, social media bombards us with its party-line content on specific issues; vaccine mandates, immigration, stolen elections, the January 6, 2021 “insurrection,” racism, and the list seems to be infinite. But the character the medium embeds in its messages is the need to censor what it deems objectionable speech. Social media is sending us early warning of the detrimental effects of its censorship. If we do not resist its message, the result will be the death of free speech.

Resistance can start today if each reader circulates a copy of this article and the graphic to their friends.

This is a long introduction to my article “A Scholarship for Every Student, Why Not We Pay for It Now!” which is set out in full below. Judge for yourself its content but also ask what is the character of the message being delivered by Medium and the other social media corporations about their right to censor free speech?

A Scholarship for Every Student, Why Not We Pay for It Now!

The local, state, and federal governments already spend more, on average, on public education, than it would cost to award a scholarship to every student equal to the average cost of education in the U.S. Unfortunately, most of our taxpayer dollars just go to public schools that are very expensive, union-controlled, and do not produce results. For taxpayers to get value for their dollars, the money should follow the student and let the student and parents choose the school. If public schools want to stay in business, the motto should be “Let Them Compete for Students.” The competition will also foster much-needed creativity in the fossilized Teachers’ Unions.

The Number of Students: The Census estimates there are 53,591,620, K-12 students in the United States. The National Center for Education Statistics and the Council for American Private Education, estimates approximately 48.6 million of these students are in public schools. 5.7 million are in private school, which is comprised of Catholic (53%), nonsectarian (14.8%), conservative Christian (12%), and other religious (19.3). Since all the numbers are estimates, and school populations change yearly, the number of students does not add up as neatly as numbers on a corporate balance sheet. There is a small discrepancy in the different estimates, so for ease of calculating let’s round off the number of U.S. students to 54 million nationwide.

Cost Per Student: In constant 2019-2020 dollars, the cost per student in public education is $14,891, which includes teachers, capital expenditures, and interest payments. The total cost of public education in the U.S. is $762 billion.

Total Cost of K-12 Education: The cumulative cost of educating all K-12 students in the United States is $762 billion in taxpayer funding for public education and another $61 billion in parent funding for private schools. Total funding for U.S. K-12 education is $823 billion or $15,240 per student.

Total Taxpayer Funding for Education in the U.S. that Can Be Distributed as Scholarships to Students: Taxpayers provide $762 billion to public schools and another $202 billion dollars to run the U.S. Department of Education, for a total expenditure of $964 billion. Since total K-12 education (public and private) is $ 823 billion, there is more than enough taxpayer funding for education to award a $15,240 scholarship to every K-12 student in the U.S. for use at the school of their choice and have $ 143 billion left over.

The U.S. spends more on education per student than 33 of the 36 OECD countries. Only Luxenberg, Austria, and Norway spend more, yet the U.S. ranks 28th in math worldwide, 18th in reading, and 22nd in science. Clearly, the American taxpayer is not getting value for its money spent on its public school system.

Parents of students attending private schools were substantially happier with the private school’s performance than parents of public schools, by significant margins. Private school parents had a substantially higher favorability rating for all aspects of school life than parents of public-school students. Specifically, there is a 78% to 57% public vs private favorability for teachers, 78% to 55% for academic standards, 83% to 56% for school discipline, and 81% to 56% for overall school satisfaction.

Another benefit of private school education is that students are more likely to have higher SAT scores, and attain college degrees. For private schools, the national average SAT score is Private 1230, whereas nationwide, the average test score is 1051.

The resources for providing good education to all students are available now. Students and parents will select the best school for the student; private, public, or trade. By allowing students to control their futures, rather than an authoritarian teacher’s union, out-of-touch school boards, or federal regulation writer, students will determine their educational path and career goals.

What Is Ketamine And How Does It Work?