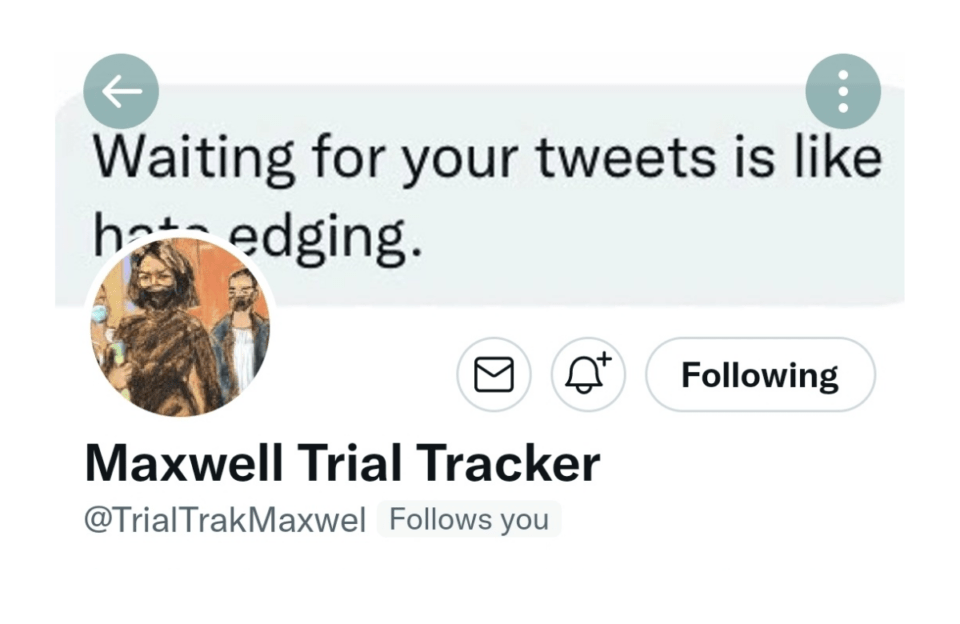 A prolific troll in the Liberty Twitter sphere known as “Dennis” has made a name for himself by parodying Libertarian figures, namely podcasters. Dennis operates largely by pretending to be a new account of a Libertarian who has recently been suspended.

Dennis decided to expand his horizons when a popular account called Ghislaine Maxwell Trial Tracker was removed from Twitter.

As Dennis changes his profile and Twitter handle often depending on who he is parodying, the article will use screenshots of the tweets rather than embedded tweets to maintain continuity. This also prevents us from linking to Dennis’ Twitter because in the course of a week that link will likely no longer work when he updates his handle next.

We will embed one single tweet from a profile picture update that will follow whatever he changes his handle to next.

Dennis renamed his account Maxwell Trial Tracker with the handle @TrialTrakMaxwel. However, as customary for Dennis, he does not change his bio to match the parody. This allows anyone who is observant to catch on, yet Dennis’ followers grew from 2,000 to nearly 17,000 in the course of a day.

Pounder of twinks, plower of fairies, crusher of bottoms, first of his name, King of the Gays! Reformed Sodomite! Pronouns: Fuck/You, Parody 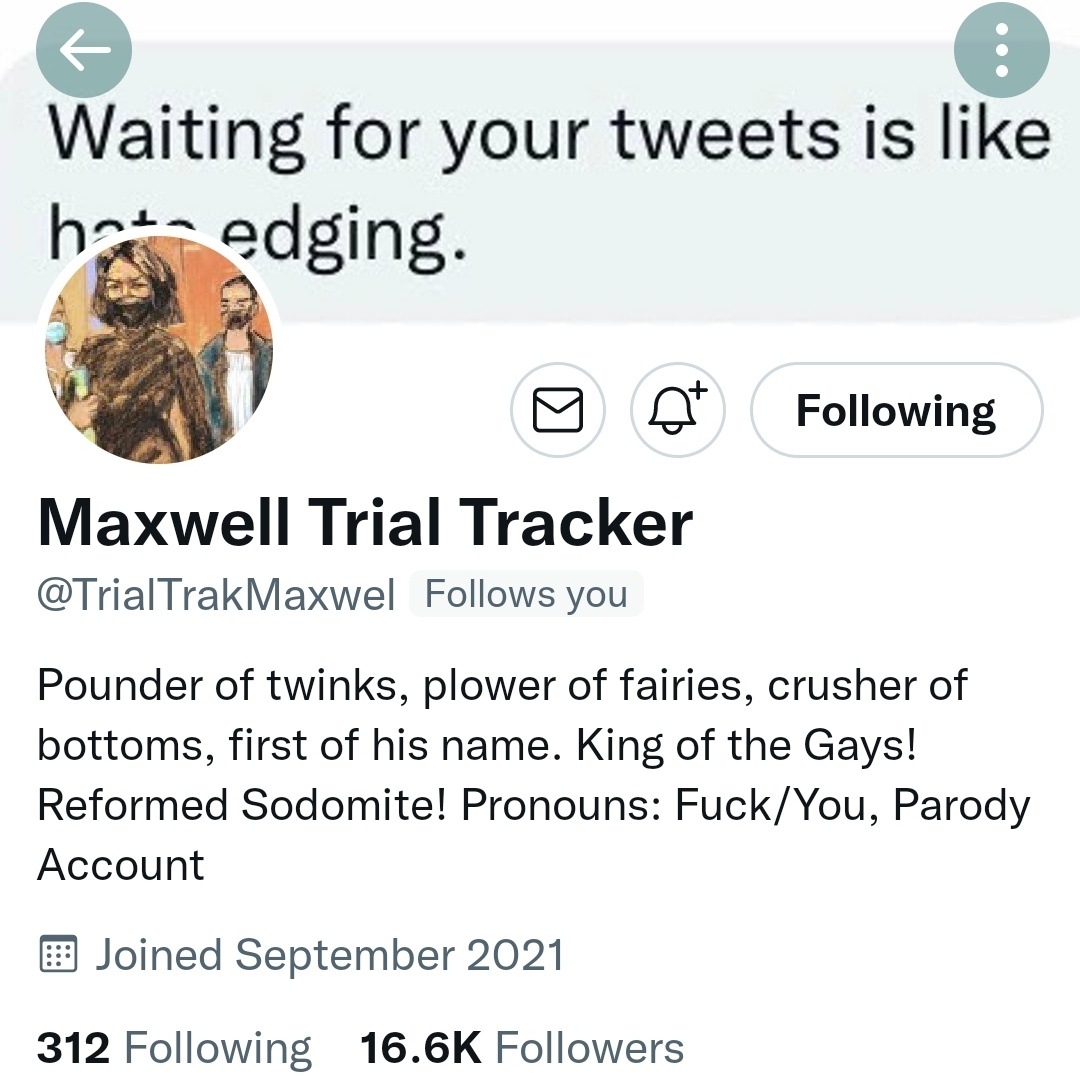 Dennis’ Mona Lisa on this Maxwell Trial Tracker account was a tweet claiming that Bill Clinton had been served a subpoena and would be testifying in the Ghislaine Maxwell Trial. This was retweeted and quote tweeted a few thousand times. 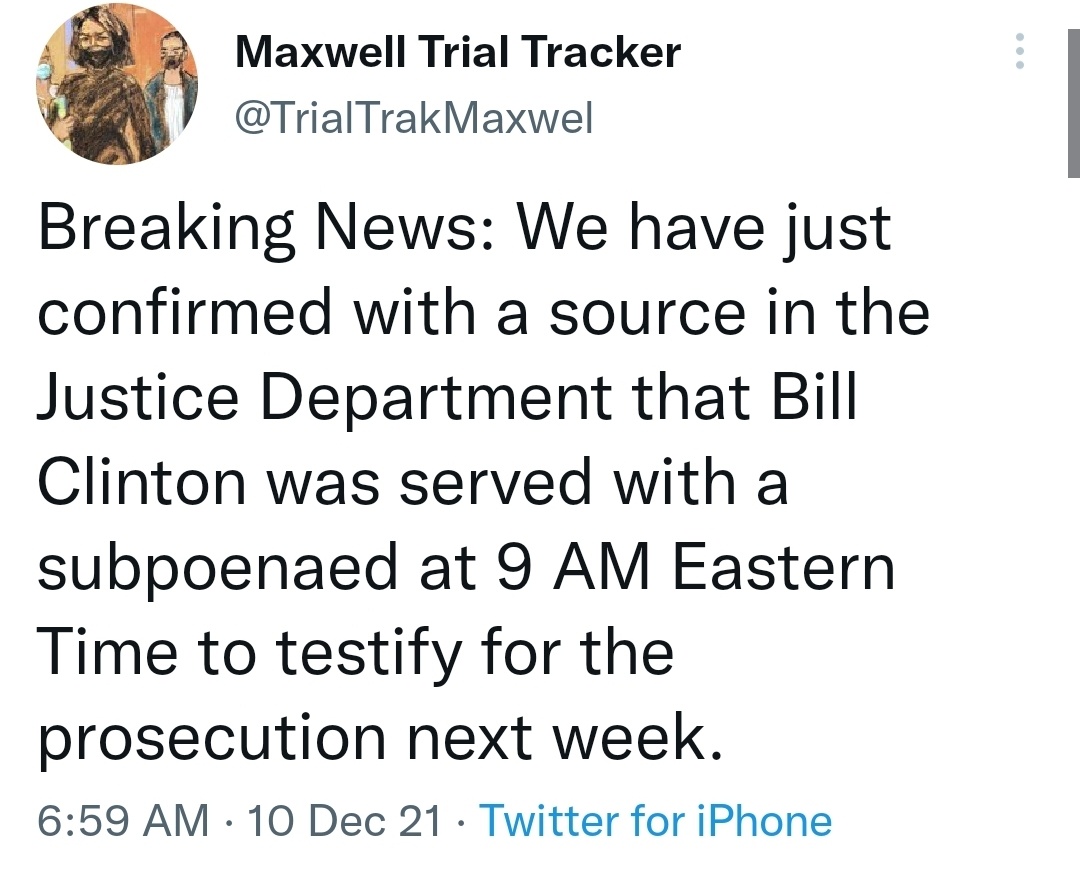 This also prompted some to author their own tweets with this claim, one of which was retweeted by Libertarian Podcaster Reed Coverdale, whom Dennis had previously parodied under the handle @ReeeCoverdale. 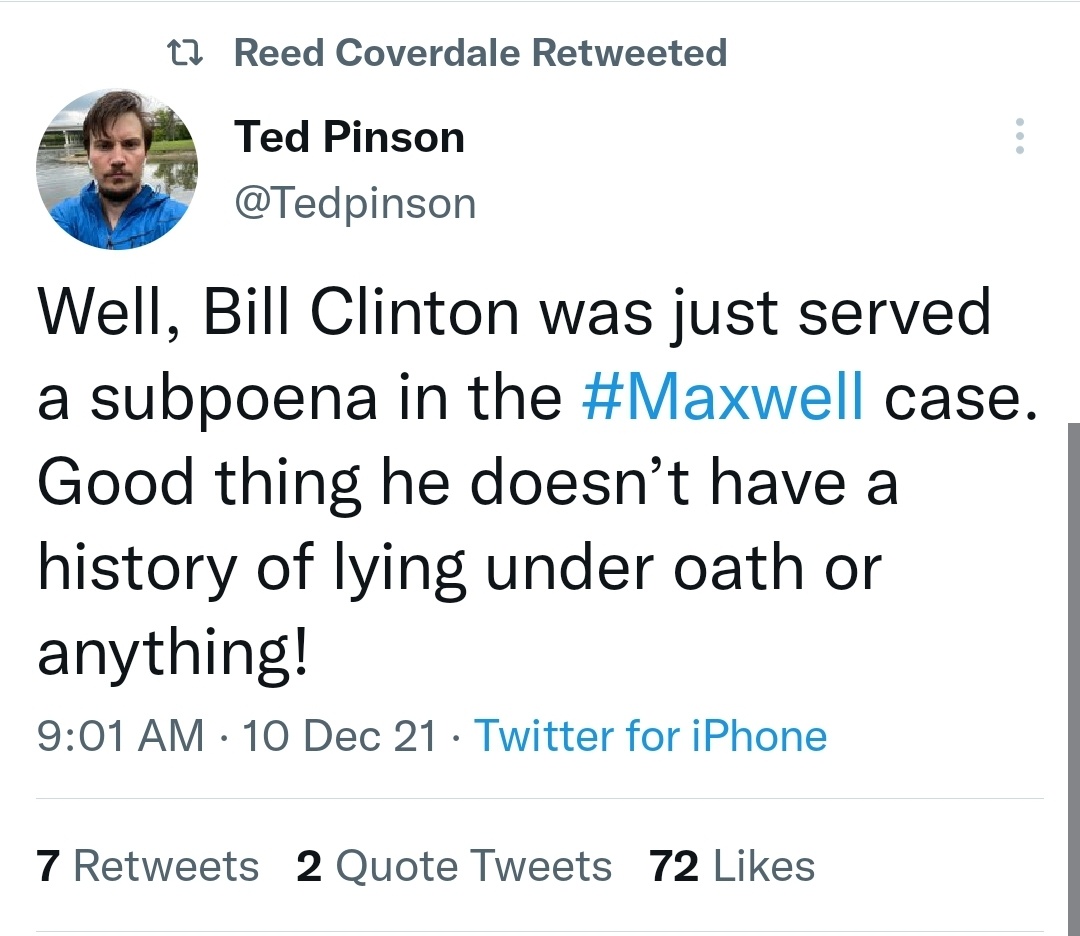 Once Dennis decided this gig was up, he changed his handle and name again and tweeted to all his new followers, calling them stupid. 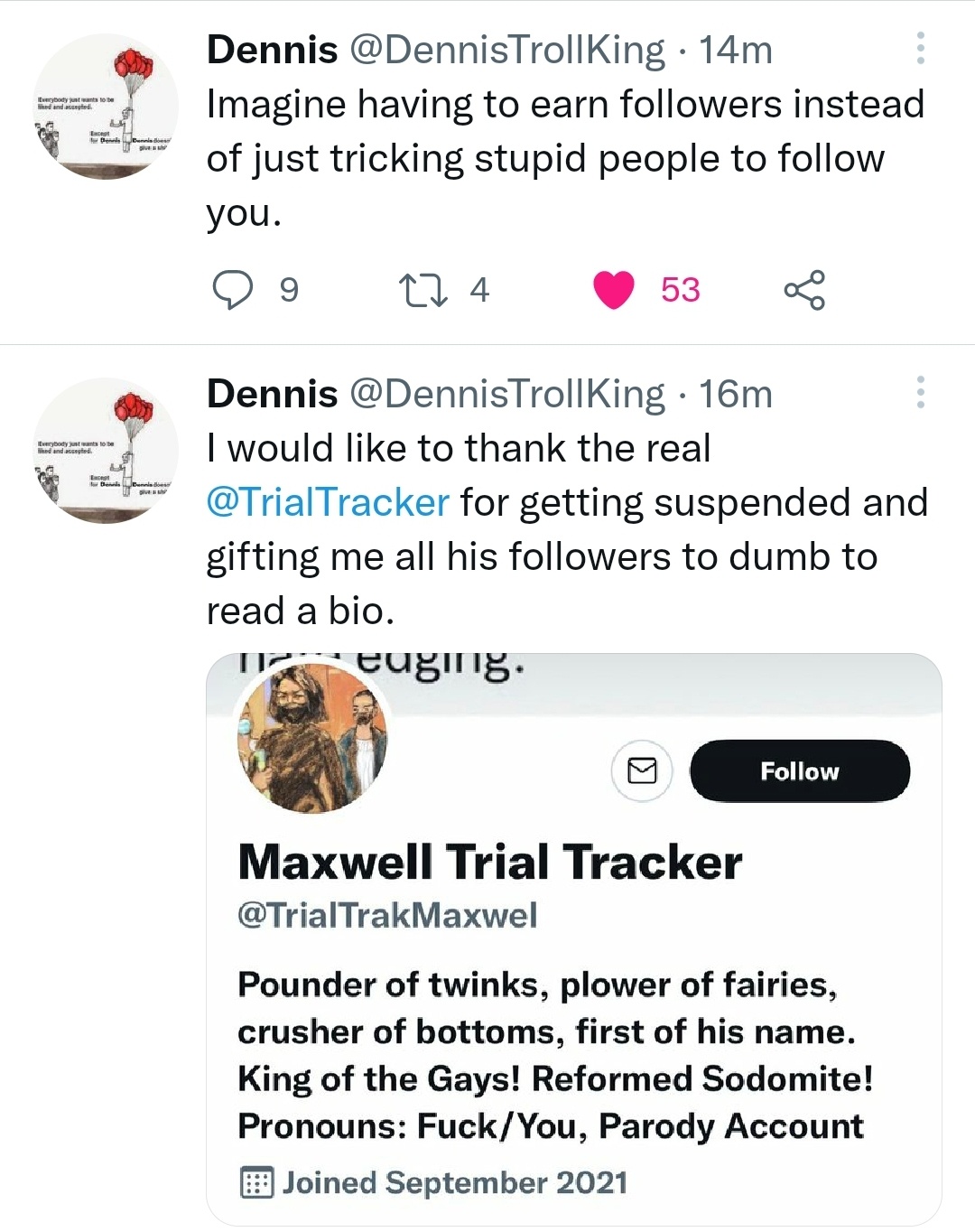 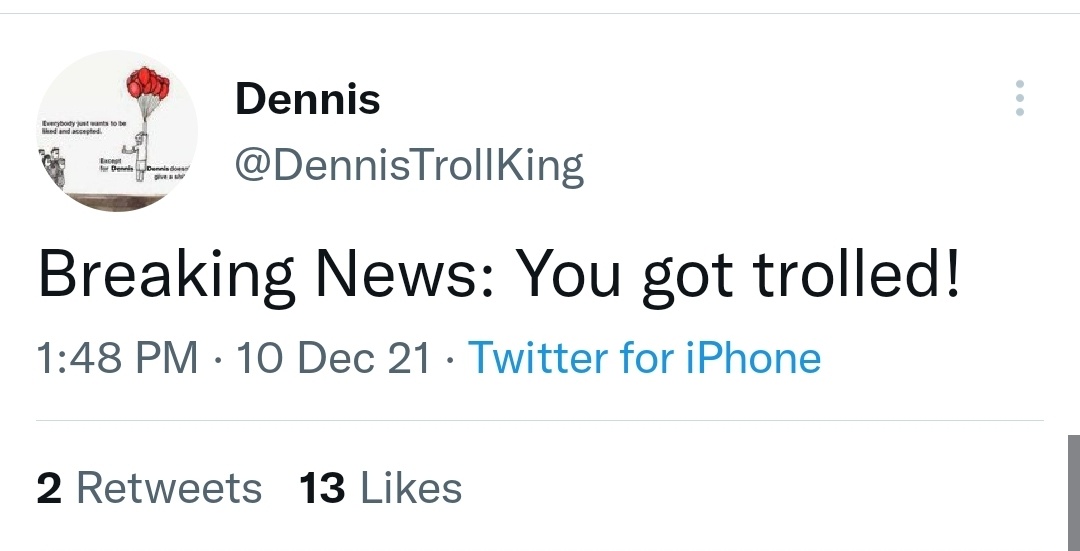 At the time of this writing, Dennis has so far lost 600 of his new followers. 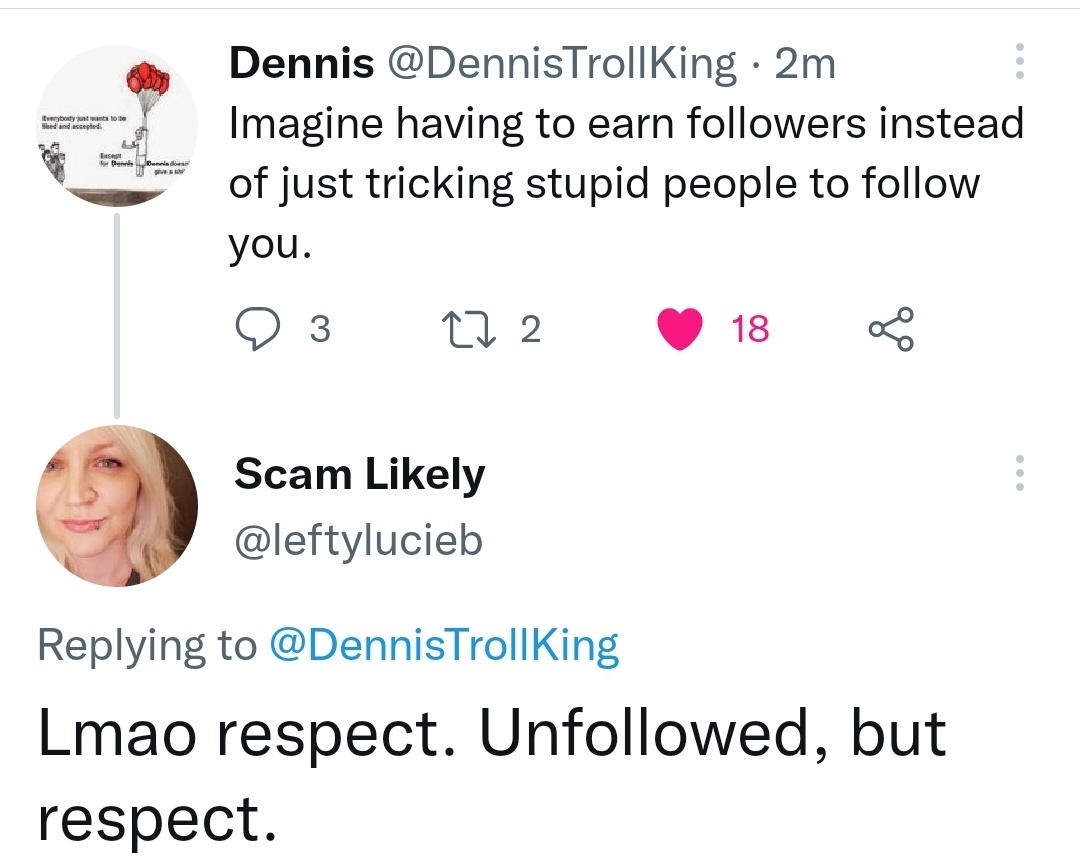 Important Points for Buying and Using a Pool Vacuum Cleaner