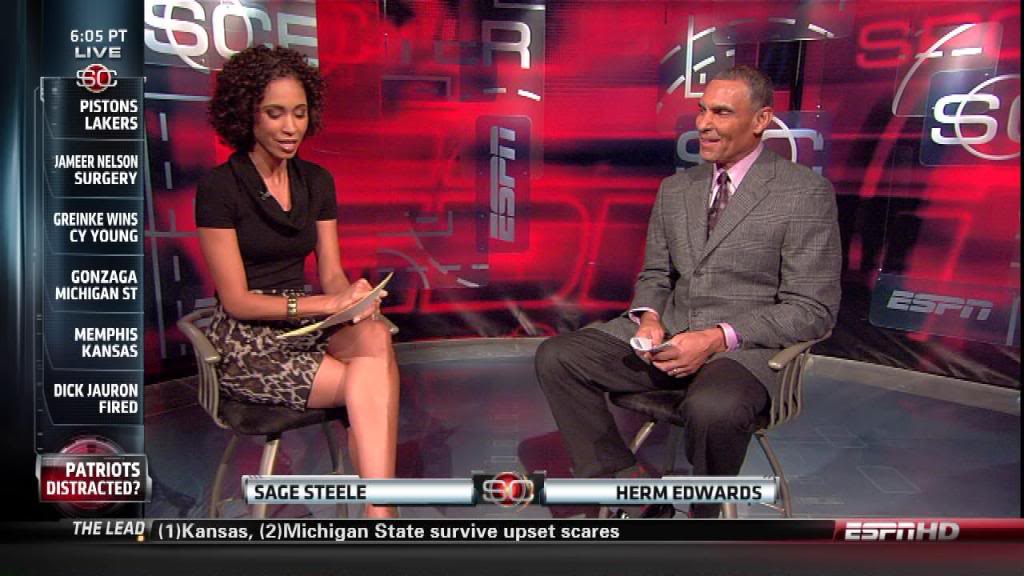 Last week Tyndale House Publishers presented the “Under Our Skin” forum on race and faith in Tampa Bay. The event drew such luminaries as former NFL head coach Tony Dungy, “The NFL Today” host James Brown, Baltimore Ravens tight-end Benjamin Watson, chronically underrated former NFL running back Warrick Dunn, and ESPN anchor Sage Steele among others. The event was billed as a place to “discuss the intersection of race and faith in America today”.

At the forum Steele said the following:

“There are times that I believe that we, as African-Americans, can be hypocritical, and that is to not look ourselves in the mirror when we are saying certain things and blaming other groups for one thing when we are doing the exact same thing…The worst racism that I have received [as a biracial woman married to white man], and I mean thousands and thousands over the years, is from black people, who in my mind thought would be the most accepting because there has been that experience…But even as recent as the last couple of weeks, the words that I have had thrown at me I can’t repeat here and it’s 99 percent from people with my skin color. But if a white person said those words to me, what would happen?”

Oh boy…if there were ever  some fighting words in the context of the modern American racial debate, those would do it.

Full disclosure, I am not black or white (neither is anyone else for that matter but let’s leaving aside the ‘pink vs shades of brown’ stuff for now). As such I do not directly experience what has become our nation’s most prominent racial dichotomy first hand. I do however have an outsider’s perspective on the issue which may be more useful for our purposes.

So working in reverse order let’s answer Mrs. Steele’s closing question first: what would happen if white people had been responsible for the same abuse she’s received from black people over the years? Had it become public they would have been castigated, of course. And to a degree this is not only obvious but proper, after all there aren’t many arguments for racially charged abuse being a positive thing. Why the implied double standard for behavior? Well now, that’s an interesting question.

As to who started it I think the answer is obvious. Everyone. Black and White Americans have worked together to, quite efficiently, trap themselves in this situation. I don’t think at this point in time there is any way to objectively say one ‘side’ is any more guilty than the other for this. It is said that in love there is always one to kiss and another to offer the cheek (get your head out of the gutter). Well in the modern landscape of American race relations there is always one willing to oppress and another to be oppressed, it’s just the same two groups swapping the roles.

For some time now it has seemed that an unfortunate amount of people in the black community have suffered from the curse of the ‘other’. We all the know statistics about the endemic violence that plagues urban blacks as well as those about their relative educational and professional attainment levels. And yet the most prominent social movements to come out the black community in recent years have focused exclusively on external problems. This is not to say there aren’t any but as the old adage goes “physician, cure thyself”. It’s as though some American blacks have become bizarrely attached to this less ideal state of affairs. Any suggestion from outside the community, and particularly from whites, about what might be (or should be) done to curb the current situation elicits an immediate impulse to attack.

And attack they do. At the first hint, out comes everyone’s favorite rhetorical playing card and they wield it with the accuracy of Gambit. And don’t ever let anyone tell you that it’s not often a conscious decision. I can speak to several occasions personally where black acquaintances of mine have purposely played the ‘race card’ knowing full well most white people will deflate like a (insert non-sexual metaphor here) when confronted with it. And there are those who have actually made long careers based almost entirely on that fact.

Thus they are both oppressor AND oppressed.

Not to be outdone the white community has answered by bring it’s own brand of lunacy to the racial landscape. Often it takes the form of what I call rhetorical self-flagellation. Like their whip wielding counterparts it often seems portions of white America are trapped in a perverse contest with themselve. To see who can demonstrate most fully their contrition by most loudly denouncing themselves. The milder form of this is simply deferring to blacks (and other minorities) on any number of issues even if their opposite number is clearly wrong just to avoid being handed that dreaded card.

Of course we wouldn’t have the current mess on our hands that we do if not for another strange phenomenon in white America: the helpless Gods complex. Non-hispanic whites make up just under 64% of the population of the US (Source: 2010 US Census), this obviously has led to a certain cultural preponderance for them. This is a result of simple statistics and NOT, as many on the left believe, an evil conspiracy. As such white America tends to play a very large role in helping establish the mores of what is known as American culture. And with this power many have decided to just go ahead and ignore Uncle Ben’s advice and create the above mentioned complex.

You see, and this is something our friends on the left tend to forget, you can’t actually believe everything is your fault if you don’t also believe you could fix everything. That it MUST be you doing the fixing. This leads to what some call the subtle racism of lowered expectations but I call the helpless gods complex. “Oh if only we had”, “oh if only we could”, “oh if only we would”. Not realizing of course that in this world view those of us not dwelling on Olympus are shunted into the category of ‘can’t help themselves’. Factor in white America’s statistical and cultural clout and you get…what we have.

Thus they are both oppressor and oppressed.

So to answer Mrs. Steele directly I’d say that white people could not have delivered the same abuse other black people did to you with so little comment, since the culture doesn’t allow it without major censure. The problem I have with this is that it shouldn’t sign off on ANYONE delivering hurling racial abuse.

Libertarianism to the rescue! Try to apply the NAP as much as possible to your fellow human beings and you’ll avoid a great many of these problems. Or as I more colloquially put it: don’t be a Richard. As the great man said:

“As you travel the world you find people are pretty much the same all over. There are good people and then there are Russians”-Jim Gaffiigan

EDITOR’s NOTE: The opinions expressed in this article are those of the author, they are not representative of The Libertarian Republic or its sponsors.

Millennials: Free Speech Should Not Be A Fight