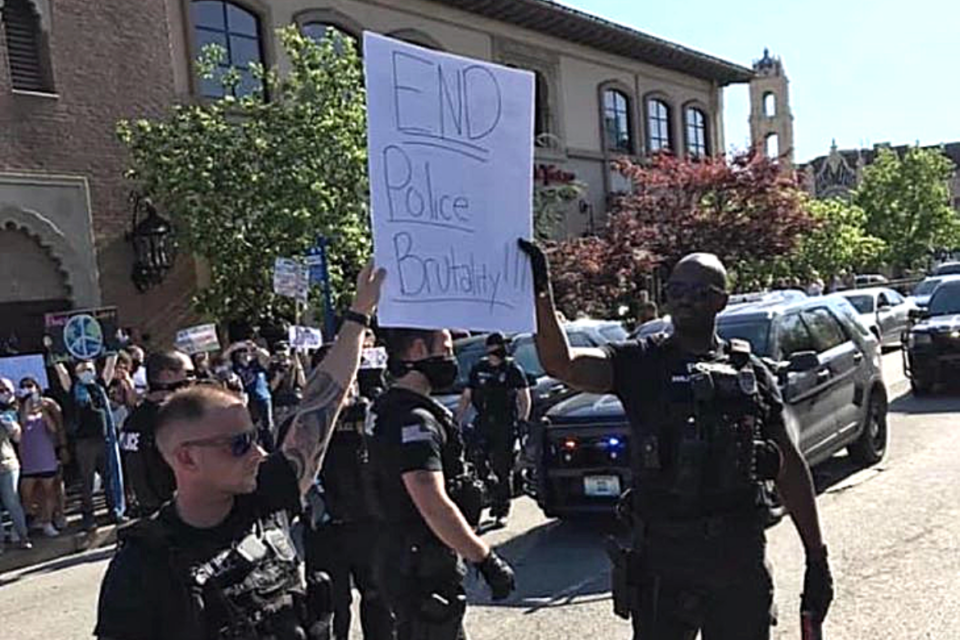 Across the nation, protests were spurred by the death of George Floyd in Minneapolis. I talked to a protester, who for this article will be known as “Charli”. Charli is a vocal, concerned citizen and she was motivated to join the protest after years of education and experience in the legal field exposed issues in the justice system. She has been told her views are “extremist”.

Charli got to the Kansas City Plaza on Saturday afternoon just before 5:00 p.m. to participate in the march. However, official forms and regulations had not been submitted and followed, “so it wasn’t a lawful protest –whatever that oxymoron is.”

Earlier in the day, the protests were filled with police genially talking to protesters, joining in on chants, and holding signs that said “end police brutality”. The later protest, however, had instances of violence that escalated over time.

Charli told of the thousands of people there, many of them hurting and there out of a “community need to mourn”. Charli tells me the issue that motivated her to participate in the movement is larger than the Minneapolis issue, although, “George Floyd was a good example of how everyone could look at a video and be outraged. No matter where you are on the political spectrum, you watched the video of that man be murdered, and it hurt.”

Charli said, “I think the way things could be better is by defunding the police and rebuilding the police department into a much smaller section of a broader societal system of people who are specialized to handle the problems that we force police to handle.”

I brought up that local funds are some of the least frightening parts of the police department—for example, militarized equipment and increasing harassment of non-violent drug criminals are motivated by federal funds and grants. Charli responded that “is a concern of mine, as well.” She summarized the notion that less should be asked of the police in that,  “all we want you [the police] to deal with is the violent stuff. Just the violent stuff.”

Charli noted that a great example is Camden, New Jersey. The city “completely rebuilt their police department like 7 years ago. They reduced their police and they changed the function of the police in their city. It has completely changed how their community interacts with the police.”

When dusk began to settle, Charli decided it was the best time to leave because she thought the crowd was changing, and she was concerned, stating “98% of us want to be heard and mourn together, but 2% wants to f#*! some sh!* up and I didn’t want to be in that.”

She left at just the right moment. “I wasn’t even to my vehicle, yet, because it was parked a few blocks away and I turn around to see a plume of teargas floating over the protest.” In disbelief, she added, “I was in the middle of that area fifteen minutes ago”.

As Charli was leaving, she walked past the officers getting up from taking a knee and putting their gasmasks on. She points out that they didn’t warn the protesters about the impending teargas, “but maybe they did after I left. Maybe they did give a thousand people ten minutes of warning to get out of the way of teargas.”

The violence Charli saw from protesters were a few throwing partially empty water bottles at the police. “I did not see frozen water bottles or rocks being thrown, but I did hear that happened later in the evening.”

The only act of vandalism that she can recall was a man spray painting the street with the words “this is our street”. Charli mirrors the sentiment of Houston Police-Chief Art Acevedo who said, “those little white guys with skateboards start all the shit.” She hints that the vandal matches that description.

I noted that George Floyd lost his job weeks before he was arrested and was subsequently murdered for using counterfeit payment. She recognized that economic shutdowns did probably hurt underserved people the most, and noted that, “I grew up in a paycheck-to-paycheck household.” Then with a laugh adds, “as extremist left as I apparently am, I agree with reopening the economy because it is our poorest people who will pay the most.”

Representative Justin Amash has introduced a bill to end qualified immunity for police officers, meaning that they could be held liable for misconduct on the job. However, Charli is not convinced that would fix the problem. “I think ending qualified immunity would be more plausible if we had smaller police departments and police had less of a burden put on them.”

She is aware and respectful of the difficult job we ask police officers to do, “as it is right now, we ask these guys [police officers] to do a job that we don’t give them the proper training to do and then, we’re going to take away any protection that we offered you.”

When asked about Shaun King’s comments about how Rand Paul is one of the most consistent defenders of criminal justice reform on Capitol Hill, Charli replied emphatically “that is so accurate.” A rush of pride in my man Rand came over me as she added, “If I see a Rand Paul headline, I’m reading the article. We don’t line up on everything, but I do think he is an interesting politician and he has a lot of good things to say.”

I find a lot more common ground with libertarians than either of us think we will when the conversation begins.
-Charli