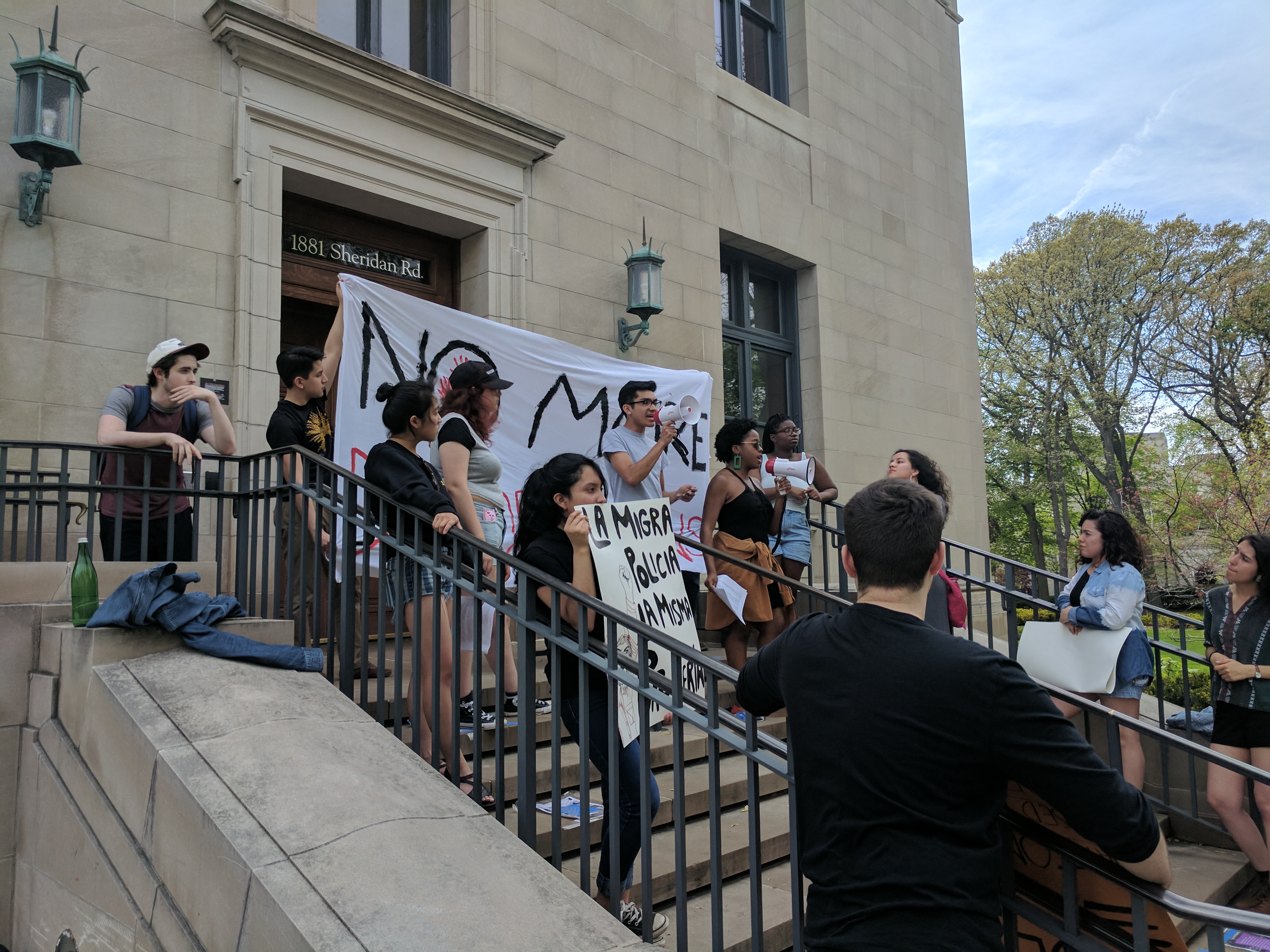 Evanston, IL – Northwestern University has become the latest battleground in the fight for free speech and academic liberty. Sociology professor Beth Redbird invited a public relations officer of Immigration and Customs Enforcement (ICE) to participate in a lecture series on “Inequality: Race, Class, and Power.” To the activist organizations on campus, this invitation was unacceptable. I attended the protest to experience first hand the tactics employed by activists to silence professors.

MEChA, Black Lives Matter, Asian Pacific American Coalition, NU QTIPOC, NU Rainbow Alliance, and Immigrant Justice Project organized a protest to prevent the ICE representatives from attending the lecture. According to their official statement “regardless of arresting power… dialogue with any ICE official legitimizes their position as state actors of violence.” The flier goes on to warn students that “engaging with ICE creates harmful discourse that hinders critical conversation about state violence.” Following a paragraph of fear mongering, the activist manifesto presents a list of demands ranging from an undocumented students resource center to simplifying the admissions process.

Protesters assembled around all entrances to Harris Hall on the Evanston campus. Blood stained banners reading “No Human is Illegal” and “Stop Deportations” were draped across the doors. As the crowd grew demonstrators scanned the area, prepared to stop ICE in any way necessary. “ICE got in!” an organizer yelled to her comrades. Frustrated, the crowd began a series of chants and speeches justifying their need to disrupt the university lecture. Unsatisfied with their failed wall, the activists marched into the building.

The coalition of activist organizations entered the foyer in front of the lecture hall. Once in place, two students with megaphones led the group in chants. “ICE is a disruption, not a discussion” and “Fuck ICE,” echoed through the building.

Assistant Vice President and Dean of Students Todd Adams arrived to plead with protesters to take their demonstration outside. Unmoved, the chanting continued. Dean Adams explained to protesters that professors are allowed a degree of “academic freedom,” and that the university is not in a position to prohibit speakers from campus. “ICE is not good!” responded an eloquent demonstrator.

Thirty minutes into the standoff, professor Redbird allowed the protesters to enter the lecture. Immediately upon entering a screaming match ensued between the demonstrators and professor Redbird. Several students fled the hall, some in tears. Professor Redbird grabbed a microphone, “Enough! Class is dismissed.” she yelled over the activists. “You are not required to stay in this uncomfortable environment if you don’t want to. I will stay and answer questions!”

With the protesters unwilling or unable to posit a question, I raised my hand. “Are there speakers on any subject you would feel uncomfortable presenting to your lecture?”

“Well, I have a problem with a class that censors…” before she could continue the activists screeched in disgust. The pattern of interrupting professor Redbird continued throughout the Q and A.

The protesters’ statements revealed a troubling belief system. “This bubble where everything is going to be objective, that is erasure. That is violent.” Demonstrators felt no distinction between physical and emotional harm. “We are trying to make the case that it’s harmful either way. It’s not worth putting a symbolic danger on campus for the purpose of understanding it.”

Professor Redbird, a progressive and advocate for undocumented immigrants, found this assault on academic freedom troubling. “My husband is an immigration lawyer and when the travel ban came down he rushed to the airport to help. He could help because he knew the law. Without that knowledge he cannot help anyone. I want you to speak up, but I want you to understand the power. Without that knowledge you will always be outsiders. It is easy to be outside when you are loved. You need that knowledge to survive.” Before she could continue angered protesters interrupted.

She went on to explain that the outside world, their home, and places of recreation should be safe. However, the classroom is a place that should make you uncomfortable. “Understanding the way society works is uncomfortable. There is no way to learn how it works without being uncomfortable.” Frustrated, the students urged the need to censor “violent opinions” in the classroom.

It became clear the protesters held no regard for freedom of speech or freedom of thought. The activist community makes no distinction between physical violence and emotional violence. The ICE representatives held no arresting power. They are not allowed, by law, to carry out violent behavior. And yet, according to Daniel, a sophomore participating in the protest, “We must confront the idea that all opinions are valid. Even that should have a limitation under free speech.” To him the pursuit of education is not worth “putting students in ideological danger.”

Students in Redbird’s course disagreed with the activists’ assault on their class. Rick, a freshman in economics, disapproved of the protest’s “blatant disregard for our opportunity to learn and make change towards what the group was advocating for.” He felt that the protest hijacked their class in order to make a statement against ICE.

It is clear that academic freedom is under siege on college campuses. Actions such as this have landed Northwestern on FIRE’s list of worst colleges for free speech. Students and professors on both sides of the political spectrum must continue to pursue knowledge, no matter how uncomfortable it may make students. The censorship of “violent opinions” presents a direct threat to freedom of speech. Campus activists and their crusade to censor professors is anti-intellectual and their willful ignorance of ideas must be confronted. The activist community remains dedicated to silencing educators “by any means necessary.” I recommend they build the next censorship wall ten feet taller.