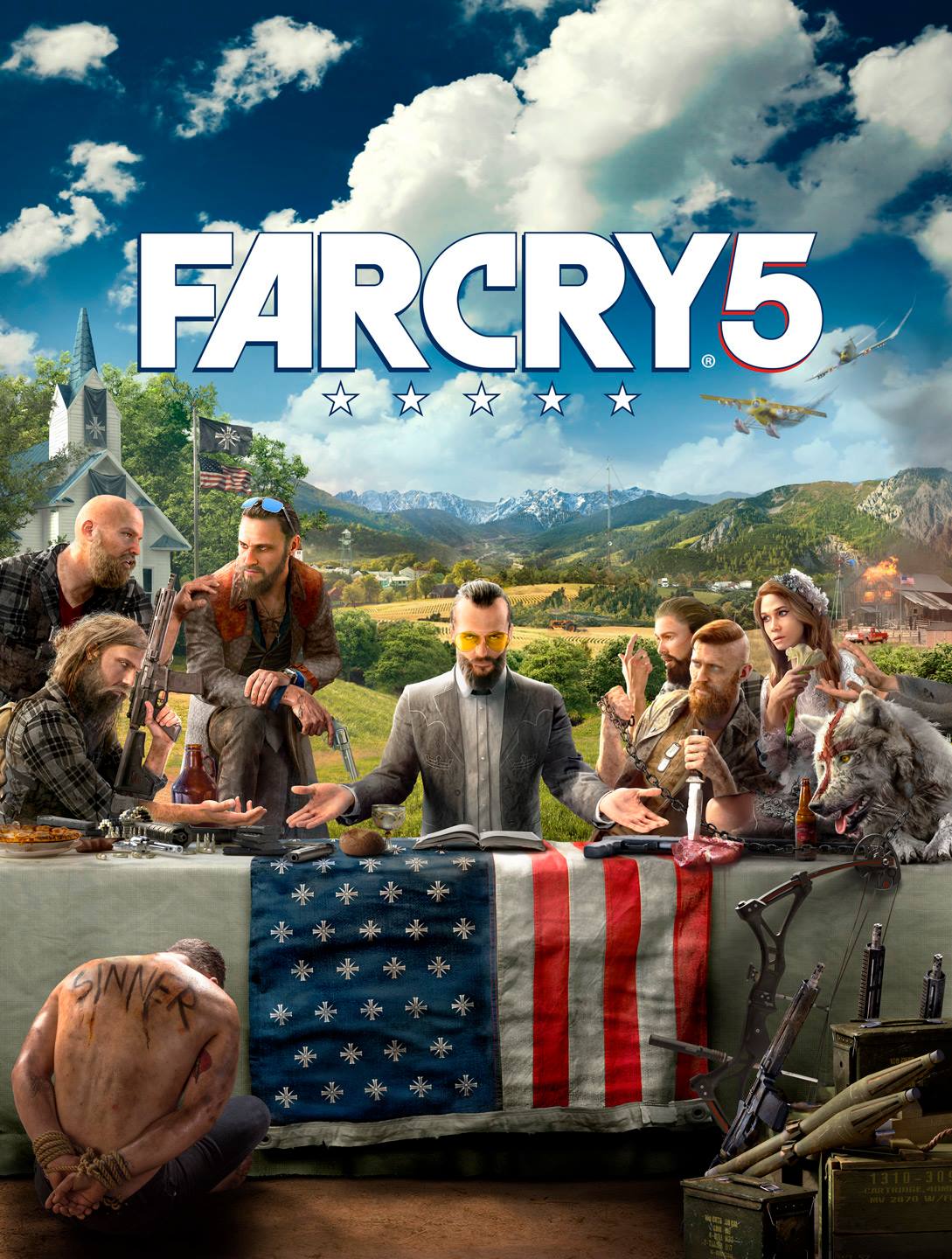 “We must atone…you can feel we are creeping toward the end” Says a disembodied voice. The kind of calm, comforting, confident voice that has lead smart men and women to drink poison Kool Aid, or kill themselves in the name of a comet, or violently murder Roman Polanski’s wife.

And so begins our introduction to Ubisoft Montreal’s “Far Cry 5.” The first official trailer dropped today. Taking place in rural Montana, the game looks to focus on a religious cult of Americans who rise up and seize the town in the name of the God almighty…because you arrived. Who ‘You’ are remains to be seen.

The 2:15 trailer begins with the above phrase, and slowly morphs into a description of the forced baptism of the citizenry, ultimately demanding they convert to their religion else face death – or a worse fate.

Released in conjunction with the trailer are a series of odd, campaign commercially ‘resistance’ ads that are about challenging the aforementioned religious cult.

The setting and the tone of the released videos suggest something we’ve seen before, and will likely be eaten up by a certain kind of ‘socially conscious’ gamer who very badly want to kill, harm, or hate the stereotype of what a “Trump voter” would be.

To this point the series has focused on exotic locations – and your character has been tasked with killing literally hundreds of brown people in the previous entries. Specifically in Africa, The Rook Islands, and The Himalayas – though several of the “bosses” were white…for balance, I suppose.

So, having the main enemy force in this game being a bunch of white, religious extremists in fly over country is enough to make a social justice warrior’s non-gendered arousal glands…extravasate.

There will surely be stories about how it’s “time” someone made a game like this. There will be controversy and numerous stories about what the game means; How it “reflects our time” and just about everyone – myself included- will strip every little morsel of social commentary we can from it.

And with good reason.

Ubisoft Montreal, the folks in charge of the “Far Cry” series are excellent at crafting stories in their games that make you think, that challenge you, that question the nature of your character, the nature of gaming, and the nature, in many cases, of the kind of person who wants to spend sixty dollars and 40 hours slaughtering fake people with an explosive bow and arrow.

But for the people expecting this game to simply “take down” white culture, you might be in for a shock. Ubisoft Montreal has been very good at playing things “fair.” It does all of the things good movies do – making the villain compelling, and having them make sense. They show you they’re not just some maniacal tyrant, but has valid motivation and rationality for their ultimately evil acts.

These games are very often a high-explosive laced exploration of the human condition. Plus tigers.

For example, another Ubisoft Game, “Watch Dogs 2” is an absolutely damning examination of our tech-obsessed culture. It covers just how easily we gave our privacy and resilience over to tech companies in the name of convenience and security. It’s also just about the most libertarian game I’ve played.

My point; As the drip feed of information regarding “Far Cry 5” begins and the stories roll out, you’re going to feel annoyed. The coverage will lead you to believe this is a game about shooting Trump supporters or to some other insane theories.

As a man who has played and beat these games, multiple times, and soaked them up like a love sponge at a bachelor party, I advise you to have confidence. I advise you to play the other games in the series if you can. I advise you…to have faith in our French brothers and sisters and those in between at Ubisoft.

Regarding their ability to deliver a quality Far Cry, and complex examination of the rural American psyche, I have faith.

Speaking of faith, how weird is it that I wrote this article about Far Cry 4 on this exact day a few years ago?