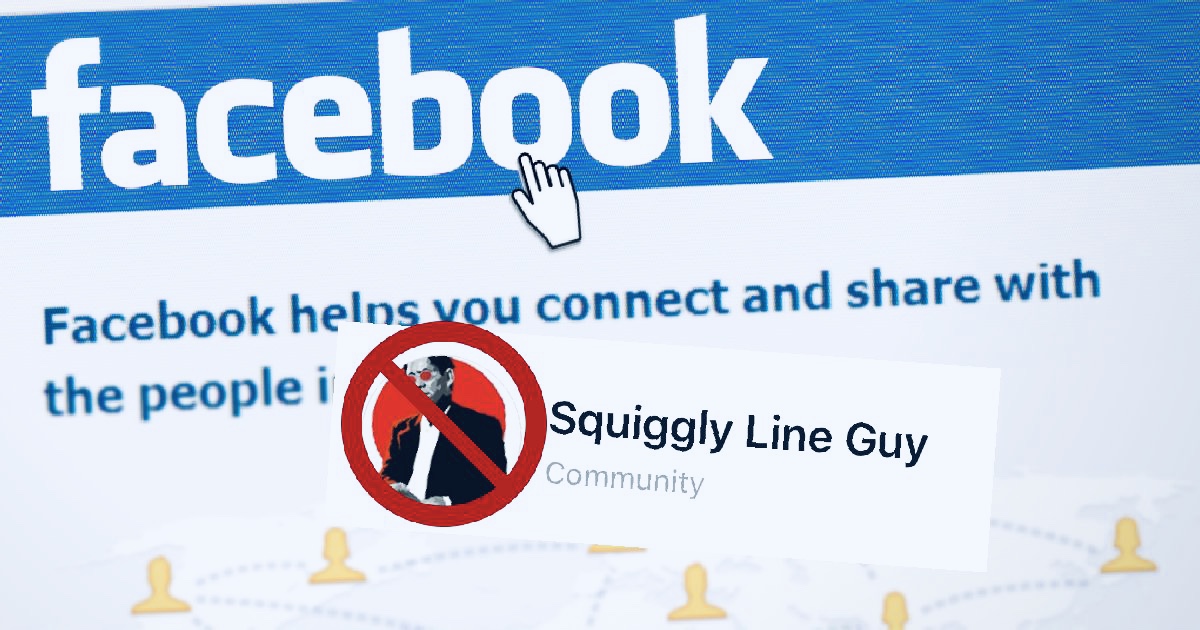 The Libertarian Republic’s Squiggly Line Guy has appeared to be intentionally censored by Facebook for nearly two years. We spoke about this issue and the importance of free speech to the preservation of American values.

Shumate: How did you start writing for TLR initially?

SLG: I originally started with the sister site, Liberty Viral. That was meant for quicker, short pieces. When some of my stuff was lengthier (including an exclusive interview with John McAfee), we sort of decided TLR would be a better fit for me. This was shortly after Austin Petersen’s run for President with the Libertarian Party. By the time he ran for Senate, I was with TLR.

Shumate: How did you discover Austin Petersen?

SLG: I had actually been following AP and TLR for some time, but wasn’t very actively engaged with the Libertarian Community. When he announced his run for POTUS is when I became more invested, joined groups, shared content, and got noticed.

Shumate: You have dealt with quite a bit of censorship for some time, now, from both Facebook and Twitter. How long has that been going on?

SLG: With Facebook, this has been on again and off again for the better part of two years. Ironically, around the same time I started writing for TLR. As we do a lot of communicating in private Facebook groups, that became a struggle during times when my account has been banned. Around this time I started writing and sharing my content is probably about when Facebook was able to peg me with a political leaning (in your Facebook settings, you can actually see how Facebook has politically categorized your political leanings, supposedly for the sake of filtering what content they show you).

Shumate: Do you buy in to the idea that Facebook is censoring you because of your libertarian political views? I mean you are an excellent satire writer and at times can be a little edgy, but that is the nature of satire. Do you think that is a contributing factor in any way?

SLG: I believe so. I don’t believe I am anyone exceedingly high profile or special, but a very clear pattern has emerged based on what reasons they give me for 30 day account suspensions, if any is given at all (twice I’ve been banned without being shown an offending post, and nothing was removed) For example, when a Catholic Church was bombed in the Philippines, I posted that Rodrigo Duterte would probably respond with “Right Wing Death Squads.” This wasn’t an advocacy or incitement of such an action, simply a pretty educated prediction. This is Duterte we’re talking about.

A friend on my page commented on one of my posts with the acronym KYS (Kill yourself) as a joke, and I jokingly replied back, “You too, babe.”

I received a 30-day suspension.

Facebook recently “Shadow Banned” one of my Satire pages for a week. This is a practice both Facebook and Twitter were adamant that they didn’t engage in, and now they openly do it. Also, in the case with this satire page (which is a political parody), no offending post was cited, and nothing was removed. It was just because. 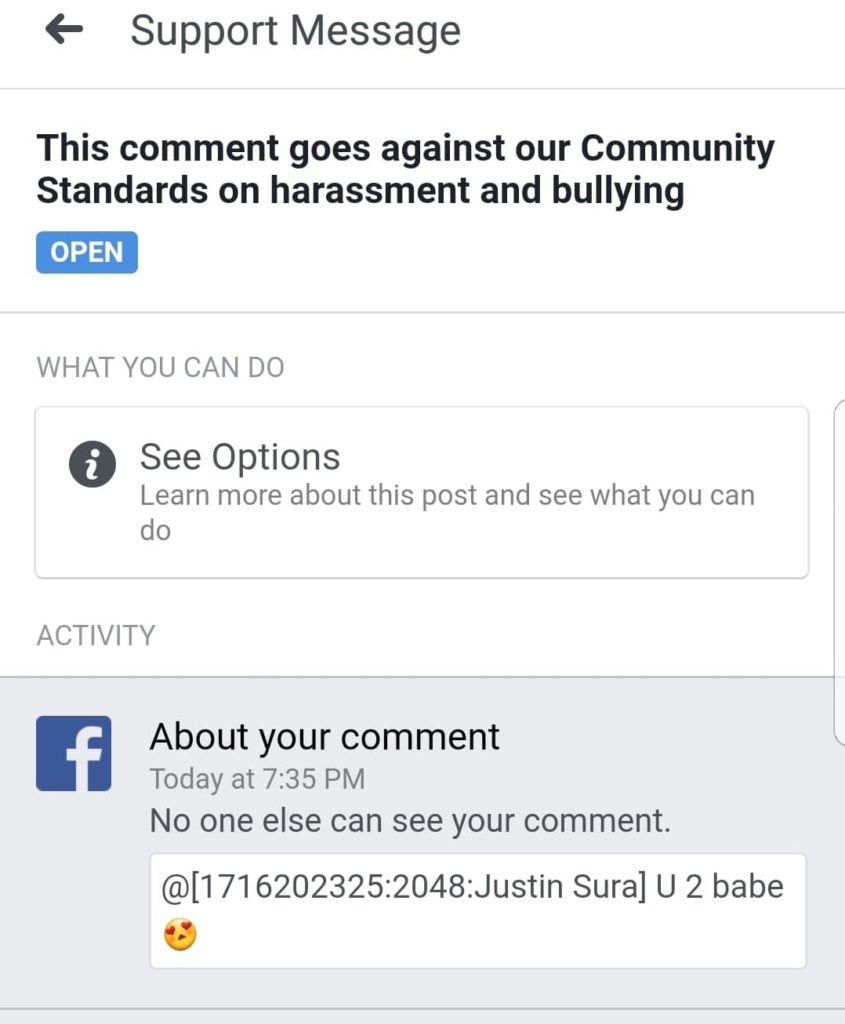 Shumate: Have you tried airing your grievances with Facebook at all? If so how did they respond?

SLG: I would love to air my grievances with Facebook, or at least have the opportunity to challenge account suspensions. And most people can. With my account, however, the option to dispute is disabled almost every time.

Also, it used to be when you posted something they felt violated standards from a page you ran, they would also give your profile a 30 day ban. That doesn’t seem to be the case anymore with Shadow Banning. When I posted something from my parody page once that got me a suspension, it was one of the few times I was able to contest. I appealed and won. Facebook put the meme back I had posted, but still left my profile on a 30-day suspension, which still meant I couldn’t post from the page when my profile is suspended.

Shumate: As Libertarians, we know that the Bill of Rights are limits on Government power, not private business’, but I have always felt that American business’ should want to honor the spirit of the First Amendment. What are your feelings on this?

SLG: I think entities in good faith should allow discourse and speech. There’s plenty of violent things on Facebook that doesn’t get taken down, or quick enough, yet I can get banned in minutes for saying, “U 2 Babe.”

It still is Facebook’s platform, and yes, they can make their decisions. It doesn’t mean I am forced to agree with their decision, or cannot criticize them for being petty. That’s where things like TLR come into play. I’ve previously covered both Facebook and Twitter’s seemingly systematic censorship of Austin Petersen during the Senate primaries in Missouri. We don’t have to like it. We can tell them to go to hell. Remember, Austin was banned from Twitter for posting a GIF from Twitter’s own GIF library.

Shumate: What do you think the best course of action is moving forward? I have advocated for removing Facebook’s platform status so people can sue if they choose. Do you think that is an appropriate solution, or would you like to see the issue handled another way?

SLG: Ultimately, Facebook is a for-profit entity. As long as they continue this behavior, the only way is to hit them in the pocketbook. It hasn’t happened yet, but at some point people, something better will come along, and Facebook will go the way of Myspace. People like myself will be the first to leave. We’ll see what Dave Rubin and Jordan Peterson come up with.

Shumate: As a writer for The Libertarian Republic and a legitimate member of the press, is there any message you have for the people at platforms like Facebook and Twitter?

SLG: For Facebook and Twitter, my message is to let people enjoy things. Stop being petty, and stop doing it in a lopsided way against certain political leanings, and if anything, Facebook is in danger of angering Progressives now too with his recent leaked comments that an Elizabeth Warren Presidency would “suck for Facebook.” I think we can expect some backlash and calls for big government intervention from the Left if anyone catches wind that Elizabeth is being suppressed on FB. I’d just sit back and enjoy that show.

Shumate: It’s good to see the stress of this pressure hasn’t gotten to you and that Facebook has failed to straighten out Squiggly Line Guy. I appreciate you taking the time to talk with me today.

SLG: The pleasure’s mine friend!

Squiggly Line Guy’s story is just one of countless stories of both members of the media and private individuals being censored by big tech companies who claim to be platforms but are behaving like publishers. Squiggs’ story is just part of big tech companies’ attempt to stifle what we do here at The Libertarian Republic. I think I can speak for Squiggs when I say they aren’t going to straighten us out anytime soon.

What Is The LaRouche Cult? The Group Taking Credit For ‘Eating Babies’ Ocasio-Cortez Troll