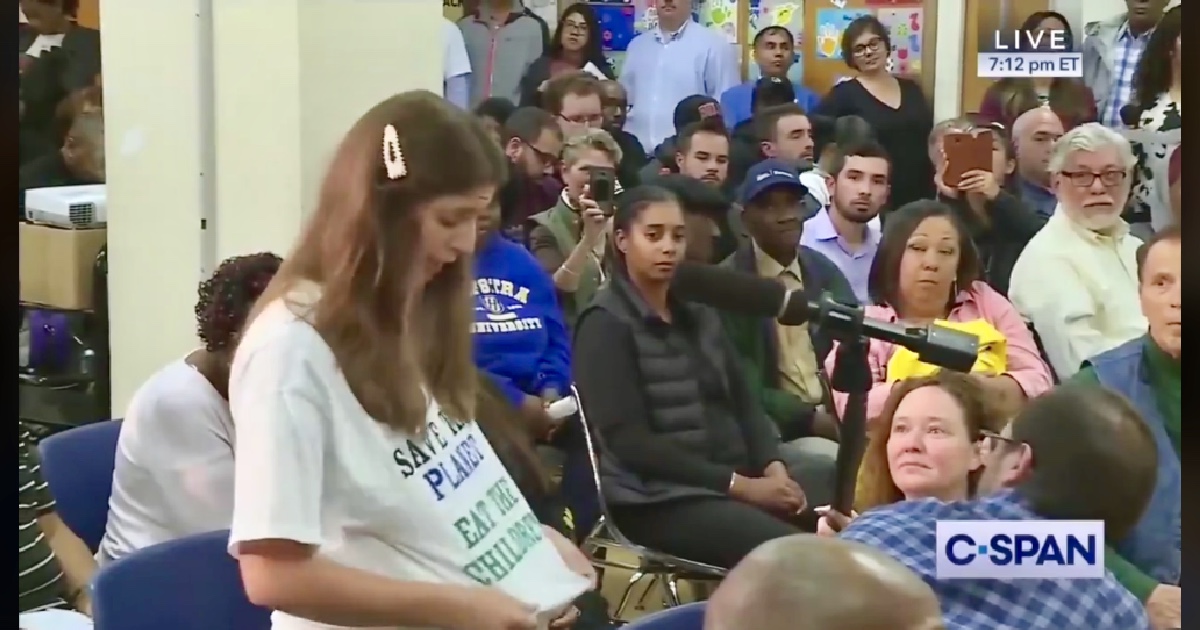 An audience member went into a rant about “eating babies” to fight climate change during the New York town hall and said the world only has a few months left. “We need to eat the babies,” the woman said.

The LaRouche PAC, a fringe political action committee, took credit for the stunt Thursday evening on Twitter. The group responded to multiple tweets on the incident, writing “it was us” repeatedly, The Washington Post reported.

The group’s stunt is “a fairly well-established tactic” for it, Matthew Sweet, a historian who has documented the group, said according to WaPo. Conspiracy theorist Lyndon H. LaRouche Jr. founded the LaRouche PAC.

“They’ve been doing this since the ’70s,” Sweet told WaPo. “The tactic is you go to a political meeting and you create a disturbance that disrupts the meeting, and more importantly, that creates a kind of chaos.”

It was us. Malthusianism isn’t new, Jonathan Swift knew that. Sometimes, only satire works. https://t.co/vR8oXdx39i

It was us. Malthusianism isn't new, Jonathan Swift knew that. Sometimes, only satire works. https://t.co/vR8oXdx39i

The group hinted on Twitter at Jonathan Swift’s “A Modest Proposal,” a 1729 satire essay where he suggested that the Irish should eat their own babies to combat a famine.

The Thursday incident sparked a Twitter feud between Ocasio-Cortez and President Donald Trump. The president called Ocasio-Cortez “a Wack Job.” The congresswoman hit back and said that it’s “better than being a criminal who betrays our country.”

Ocasio-Cortez tweeted Thursday that people shouldn’t make fun of the woman because she likely had “a mental condition.”

“Turns out the woman yelling was a Trump supporter,” Ocasio-Cortez tweeted Friday. “Doesn’t rule out potential mental issue (Drs do that) but good to know they were not in crisis. Earlier this year I was stalked & very nearly hurt by a disturbed person. I don’t take chances & immediately try to de-escalate.”

LaRouche Jr. built up his following, which reaches across the world, “based on conspiracy theories, economic doom, anti-Semitism, homophobia and racism,” WaPo wrote in an obituary on LaRouche Jr., who died in 2019.  He ran for president eight times between 1976 and 2004.

A judge sentenced LaRouche Jr., who once was a member of the U.S. Labor Party, to 15 years in prison in 1989 for defaulting on over $30 million in loans from his supporters and planning to defraud the IRS, The Associated Press reported.

He “has managed to attract a small but fanatical following to his conspiratorial view of the world,” the conservative Heritage Foundation said in a 1984 report according to WaPo. The cult advocates for economic recovery and wants to implement its four economic laws, according to its website.

One conspiracy theory that LaRouche Jr. peddled was that the queen of England was involved in the international drug trade and that Queen Elizabeth II was trying to have him fired.