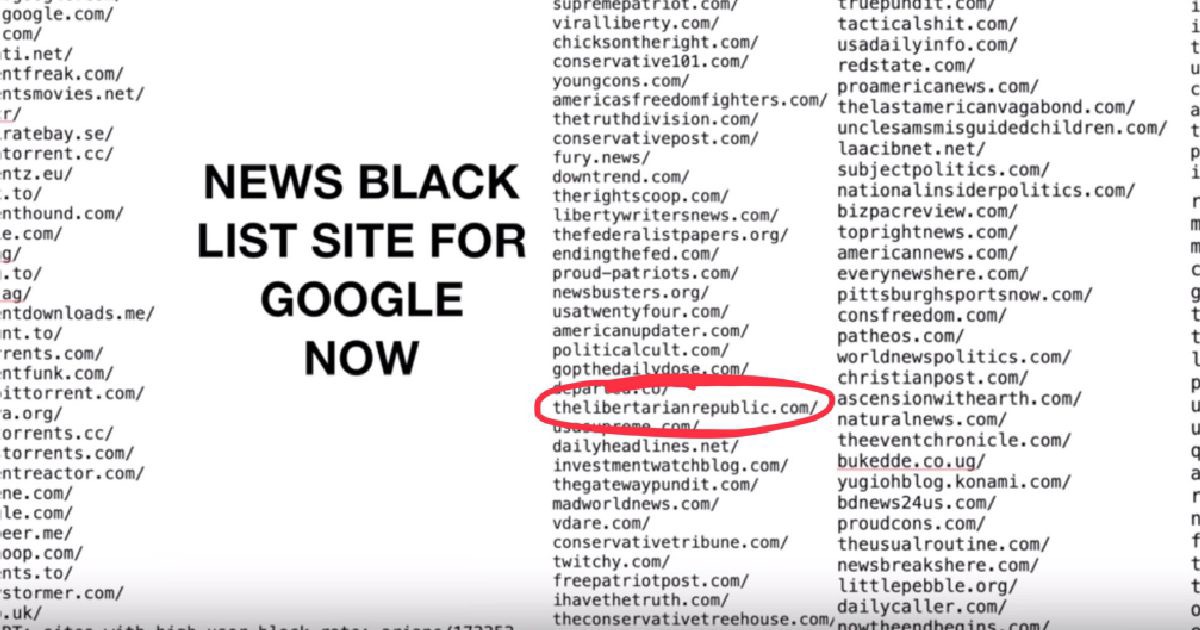 Project Veritas released an extensive list of big names in media on Wednesday afternoon that are now “temporarily blacklisted” by Google from appearing on the platform’s Google Now app.

The list of news sites blocked from Google’s media app are overwhelmingly media publications that would be considered conservative or right-leaning media sources. Some of the names included on this broad list are TheLibertarianRepublic.com, GlennBeck.com,  LouderwithCrowder.com, and RushLimbaugh.com.

An insider from Google named Zach Vorhies sat down with the Project Veritas founder James O’Keefe on Wednesday to discuss the reasons why he decided to expose Google’s progressive bias and active meddling in U.S. elections after working with the company for eight years.

Vorhies also discussed the ordeal he has personally experienced as a result of his decision to release over 100 classified internal documents from Google which allegedly concern only the app and not all Google related searches, according to NewsBusters.com

Zach disclosed that this blacklist is only one of many blacklists at the company and that Google is acting both as a platform and a publisher in determining what information users can view. He reported they “play both sides of the game,” boosting news sources that align with the tech giant’s agenda and suppressing sources that provide an alternative point of view.

In his discussion with O’Keefe, Vorhies stated that in spite of Google harassing him, he knew that he had to come forward with this inside information to clear his conscience after having participated in the company’s media deception.

“I could never live with myself, knowing that if Google was able to implement the plans that they were planning that I at the moment of choice backed out because I was selfish. I didn’t want to have that on my conscience, and I felt guilty. The feeling that I participated in what they were doing was actually worse. I feel that when I’m coming and explaining what Google was doing, this is an act of atonement to make my conscience clear.” Vorhies said.

The Blaze’s Steven Crowder and Austin Petersen, founder and owner of The Libertarian Republic, both tweeted about Google’s censorship of their content on Wednesday.

“According to leaked docs obtained by @JamesOKeefeIII of @Project_Veritas, we are being actively excluded from @Google search results. Anyone surprised?” Crowder posted.

According to leaked docs obtained by @JamesOKeefeIII of @Project_Veritas, we are being actively excluded from @Google search results. Anyone surprised? pic.twitter.com/JPqiwBjH7A

“Ayyy The Libertarian Republic made the list!  @TheLibRepublic”, Petersen tweeted.

Google executives have not yet responded to our requests for comment on the company’s reasoning for their blacklisting as of the time of this publication.

The Three Errors of Conspiracy Theory, Even True Ones