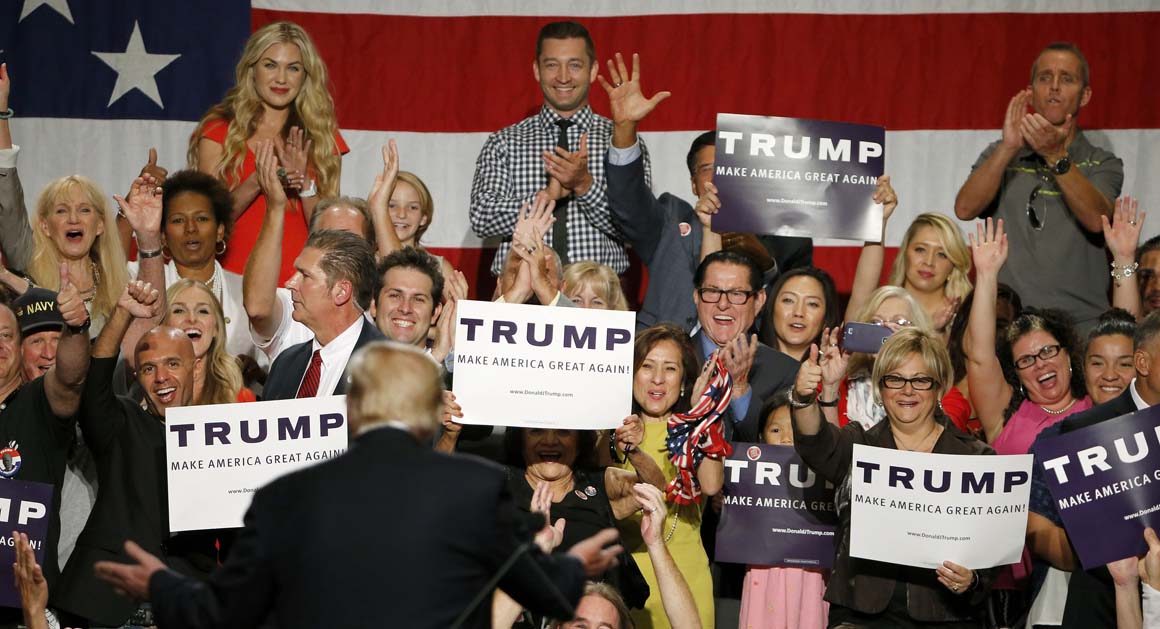 Will Trump’s Make America Great Again go up in flames just like Obama’s Hope and Change?

I made a promise to myself before the beginning of the 2016 Presidential cycle that I would not support anyone for President, and I am happy to report I have remained true to my past self. Honestly, this has been an easy promise to keep because, in my heart of hearts, I hope no one will be President, and I expect to be greatly disappointed later this year.

Yet, my heart (as well as my job as a talk radio host) also prods me to remain part of the Great American conversation, my informed cynicism flowing forth from my sure to be disappointed idealism. Consider me akin to those two old men from The Muppet Show, Statler and Waldorf, sitting in a theater box watching the 2016 Presidential showdown. I’m not happy with what I see, but I still show up day after day in my usual curmudgeonly way. I am truly a disinterested party when it comes to supporting one presidential candidate over another. Let it be clear, I loathe all presidential candidates equally.

However, despite this aloof pose, I do love my fellow Americans and hope to see this dear nation of ours flourishing and prosperous once again. I do have hope for the future of America — that she will serve as a beacon of liberty for all the world to emulate.

Dare I say, I would love to see America made great again!  Yet, since I am not invested in any particular candidate, consider me a neutral third-party. Consider me a wise fool here to serve you, “the people;” a fellow traveler ready to provide counsel come what may. Thus, from this neutral place — with love for you and contempt for presidential ambitions — I feel obliged to advise those of you supporting Donald J. Trump.

You see, I received the same advice in the midst of an awful love affair last year. Friends told me, “Joey, this isn’t going to end well. Guard your heart,” but I didn’t listen. I should have, but I didn’t. I was too invested, too quick to project my hopes and dreams into some glorious future that would never arrive. My hopeless romanticism got the better of me, blinded me to the truth of my friends’ wise advice. And in the end, my heart was utterly broken, smoldering in the ashes of another burned down bridge.

I now see the same dynamic at work between you and Donald Trump. Yes, you and Donald may be having fun for now — the wining and dining, the guarantees of big walls and big balls, the promise of a happier future together — but there are red flags galore.

So, again, guard your heart.

That said, I do not expect many of you to follow my advice. No, that’s the thing with being in love — it turns us absolutely dense and quick to play fast and loose with the truth and our well-being. “When one is in love,” writes Oscar Wilde, “one always begins by deceiving one’s self, and one always ends by deceiving others,” and this is especially true of the love between the politician and the crowd.

Crowds of all stripes are notoriously more idiotic and immoral than the average person, but a crowd head-over-heels in love with a political leader? Well, such a throng is usually downright dangerous, deceptive, and dimwitted. Crowds give us the cover we need to act like total imbeciles, and democracy gives us a pass to act like petty little tyrants.

Thus, one by one, the citizens fool themselves each election cycle that a certain politician will be a president representative of their interests, and then they proceed to fool their neighbors just the same. Their tragedy is usually getting what they want.

Yet, the crowd’s collective responsibility under democracy is really no responsibility at all. There is too much moral hazard built into the system whereby all claim to take the blame without ever personally doing so. Therefore, I suspect you will not listen to my advice. I fear, if you are to learn your lesson at all, you will have to learn the hard way.

So, allow me to provide the moral of your political love story with Mr. Trump before it ends. I’ll do so by way of example. It is the story of a young woman who fell in love with Obama in 2008. The young woman’s name is Carey Wedler, and in March of 2014 she posted a video that went absolutely viral. As of this writing, her video has been viewed 1,786,025 times.

From the outset, Carey appears on-screen wearing an “Obama is my homeboy” t-shirt only to admit she was one of Obama’s most “hysterical supporters.” She then displays a photo of her on the night Obama was elected, wearing the shirt and “shedding a tear of euphoria” because she thought “history had been made.” Carey tells us that after a couple of years and little bit of research, she discovered Obama had “become exactly like the George Bush” she “used to so vitriolically hate.” She then proceeds to indict Obama’s abysmal human rights record along with other failures.

The video then takes a dramatic turn.

After telling to us she felt personally betrayed by Obama, Carey proceeds to strip off her Obama t-shirt, takes out a butane torch, and lights the shirt on fire!

I have no other way to put it — this is one of the sexiest things I have ever witnessed in politics.

And now, I can’t help but ask: will Make America Great Again go up in flames just like Hope and Change?

How many of you will feel betrayed and heartbroken by Donald Trump a few years into his tenure just as Carey felt betrayed by Obama? Will it be a few burning candles in the night or a raging bonfire fueled by millions of hats, shirts, and signs?

Only time will tell.

But again, guard your heart. I’m not asking you to stop supporting Mr. Trump, but check your expectations. Take the orange billionaire off the pedestal.

If you choose to not heed my advice, well, that is your liberty. But that brings us to the tragic moral of most political love affairs.

As Carey Wedler says at the end of her video:

“Now Barack, I can admit that I probably hated you more than I needed to once I found out what a scam you wer. I hated you more than I hated George Bush because I felt personally betrayed by all the lies that you told. But really, I should thank you now because a few years out from realizing what a scam you were, I understand that it’s not just you…it’s the institution of government that is the problem. It doesn’t matter what political party is in office. It doesn’t matter if it’s a liberal or conservative or you or George Bush or anyone else who will run for President… it’s the institution of government that is violent and forceful and coercive and kills people and subjects them to will with a force… this government that you are currently at the head of (but really it doesn’t matter who is) is strictly violative… it only restricts the potential of humanity…”

Put simply, the moral of the story is this — government is the problem. You shouldn’t put your hopes and dreams in the state, else prepare for a broken heart. It’s not about kicking the establishment bums out, and putting in new people. No, the problem is the government.

Yet, each election season, we tend to stop seeing this truth. We start seeing personalities. We start seeing the other side who wants to take power over us, so we fight back, thinking we have found a new champion for our cause. But, as you get caught up in the promises of this election cycle and your worry about the future of your nation, neighbors, and culture, just remember “we” are not the government. The government is not “us.”

Government is something wholly separate from us, and as much we would like to think we can control this wild elephant by hopping on its back and tugging at its ears, this behemoth is much more prone to trample upon our livelihoods and liberties than ever protect us.

I suppose we must have a president, but I am not convinced this is actually fact. So as you go you go forth supporting Donald J. Trump for President, just remember: guard your heart.

But if you don’t guard it and your heart is broken a few years from now, just know I’ll be there to provide the matches.

Hell, I’ll be sure to bring a flamethrower, and we can really burn this sucker, this state, down.