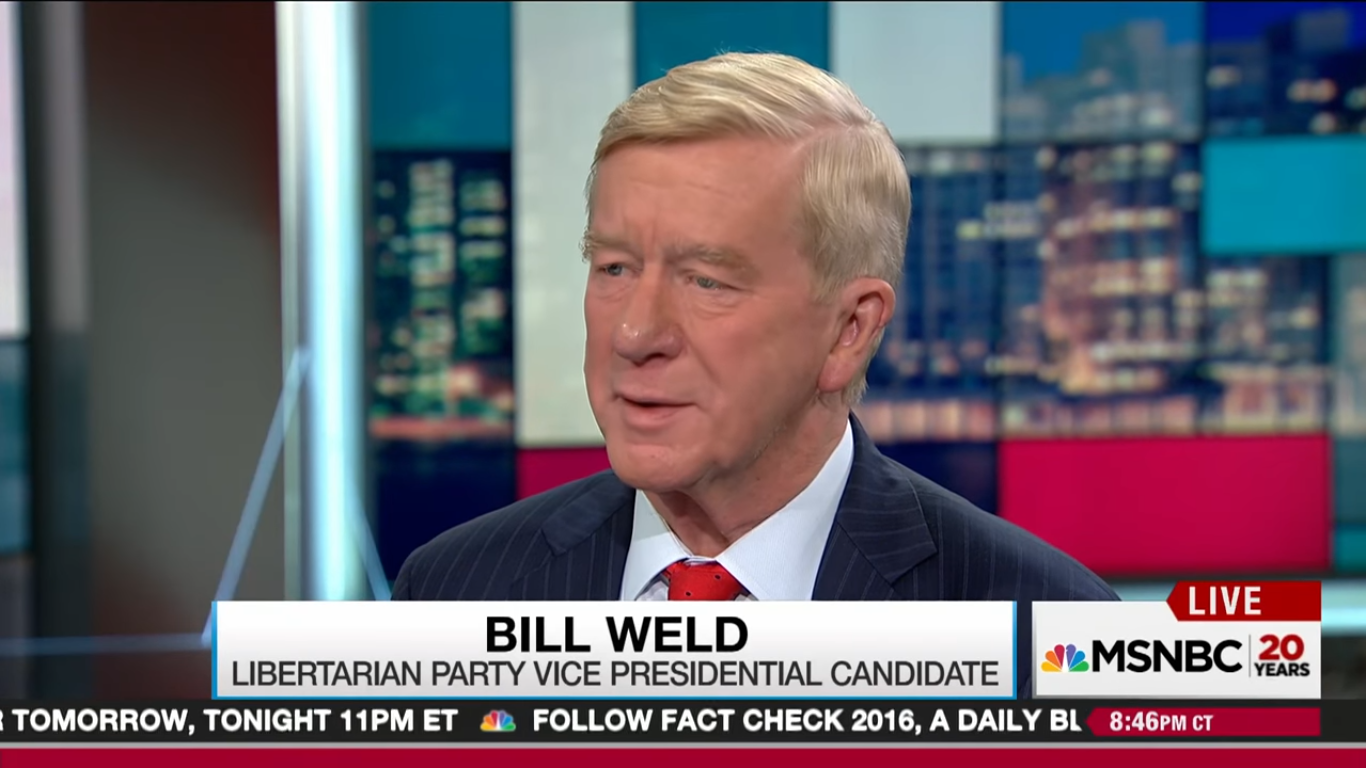 On Tuesday night, Libertarian vice presidential nominee William Weld went on The Rachel Maddow Show to discuss the state of the presidential election. As he has recently stated, he finds the newest Hillary Clinton email announcement inappropriate and likely to be much ado about nothing. First of all, this opinion should be seen as one not “wearing a partisan hat,” as Weld is keen upon saying, but rather as a lawyer and former prosecutor. Perhaps not coincidentally, two prominent lawyers in Trump supporter Jeanine Pirro and libertarian icon Andrew Napolitano share this opinion with Weld.

As he has said on numerous occasions, Weld sees Donald Trump as an actual threat to the American political system. With his newest interview, he “vouches” for Clinton’s character over recent attacks, though still insisting upon the importance of Libertarians getting 5% nationally for the sake of future elections. What should be made of all of this?

In short, Weld is a traditional politician bred from the era in which he came of age. He is willing to engage in spirited debates with those he considers to be his peers while not getting into personal attacks. For example, he and John Kerry fiercely went at each other in 1996 debates for the U.S. Senate, but once a result was reached, the two had beers together afterwards as a sign of reconciliation.

However, in Trump he sees someone who is actually mortifying and frightening, as well as a threat to the rights of disfavored groups (for whom he has spent his entire career fighting). He sees a genuine distinction between someone who he merely disagrees with on policy (Clinton) and someone who he he cannot stand to tolerate in any form (Trump). One is left to likely think that if the election were instead between Clinton and someone like Mitt Romney, Weld would be much more comfortable with either result.

As someone who has endorsed both Romney and Barack Obama for President in the past, Weld has shown himself to be someone who views character and personality equally with questions about ideology. Particularly due to the changing electorate over the past several months, spurred by the Commission on Presidential Debates unfairly excluding the Libertarians, the ticket went from hopes of victory to now just vying for 5% of the popular vote. As explained by Weld, while a victory for the LP was once seemingly possible, the reality of the two-party duopoly has likely crushed such hopes.

Some Libertarians are outraged at Weld’s statements. However, these beliefs of Weld are commiserate with a career of encouraging respectful discourse and political debate. Regardless, the Libertarian Party undoubtedly made the correct choice in selecting him as their Vice Presidential nominee, as he has helped bring respectability to a party which is likely to set a new standard for third-parties in the modern era.

Particularly in a time when many prominent libertarian figures have explicitly endorsed the wildly authoritarian Trump, while others have offered varying levels of praise, Weld’s mere defense of Clinton’s character (as someone who has known her for 40 years) is far from outrageous. His statements are far from a “betrayal” of libertarianism, the Libertarian Party, or Gary Johnson. Rather, they are an indictment of the very anti-libertarian Trump. He has not offered praise for Clinton’s political ideology or platform because he believes that his (and Johnson’s) is better. Unfortunately, due to the existence of the totalitarian Trump, he has been pushed to give his input on matters of character, something he would likely rather not do.