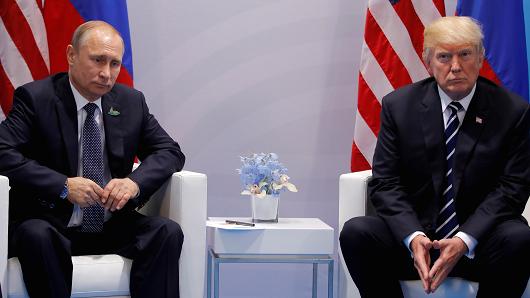 The bipartisan bill, which also levies new sanctions against North Korea and Iran, targets Russian officials in order to punish President Vladimir Putin’s regime for the 2014 annexation of Ukrainian territory and for interfering in the 2016 elections.

The bill will prove problematic for Trump if it passes the Senate, as he will be forced to decide between handing ammunition to his detractors by vetoing the legislation, or abandoning his reset policy toward Russia by signing the bill into law.

The sanctions bill threatens Trump’s autonomy with respect to Russia policy as it includes a provision that requires Congressional approval for any revisions to the legislation.

The Trump administration has previously objected to the bill’s constraint on executive power, but White House press secretary Sarah Huckabee Sanders said Trump has yet to decide his position on the bill.

“He’s going to study that legislation and see what the final product looks like,” Sanders told reporters during a Monday press briefing on Air Force One.

Senate Republicans have proven their willingness to disregard Trump’s objections by voting overwhelmingly in favor of an initial sanctions bill against Russia and Iran in June. The bill was delayed after concerns were raised about the bill’s potential violation of a constitutional requirement that revenue bills originate in the house.

Chairman of the Senate Foreign Relations Committee, Sen. Bob Corker of Texas, appeared optimistic about the bill’s prospects to pass the Senate, saying he believes the bill will pass after a few “minor details” are worked out.

“We’re about there, there’s still some procedural issues we’re discussing but, you know, I think it worked out very, very well. We’ve still got a couple of things to talk about on North Korea,” Corker told reporters Monday.

The House is expected to vote on the bill Tuesday afternoon, hours after Jared Kushner appeared on Capitol Hill for the second day in a row to testify in front of the House Intelligence Committee as part of their probe into Russian interference in the most recent presidential election. Kushner forcefully denied allegations of impropriety during his appearance before the Senate Intelligence Committee Monday.

“I did not collude with Russia, nor do I know of anyone else in the campaign who did so,” he said.

Trump praised Kushner’s performance, saying he “did very well yesterday in proving he did not collude with the Russians,” in a Tuesday morning tweet.