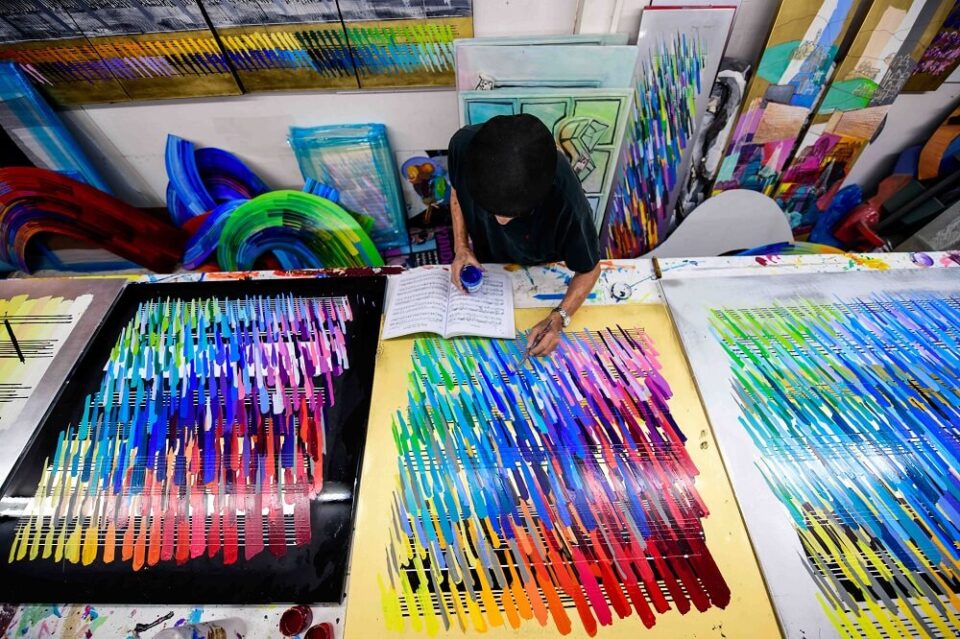 Why you should get to know this Argentinian-Israeli artist – and his work.

I am rarely asked to write about a specific artist, so I was immediately intrigued to learn about Calman Shemi. Shemi was born in Mendoza, Argentina right as the second World War broke out in 1939, and while we often don’t hear much about Latin America in regards to WW2, the region was dramatically affected, particularly economically.

Nevertheless, the South American continent was possibly one of the safest places to be in the world at that time – a statement which perhaps sounds a little strange today. In those early years, Calman was already devoting himself to his art. His first memories of becoming seriously involved begin around the age of 13 when he was already creating pottery and playing with sculpture.

He was fortunate to study under the famous Italian-Argentinian sculptor Libero Badii, who he credits with kick starting his love for art. Shemi states on his website: “He guided and nurtured my artistic spirit. I have applied the artistic and philosophical principles I learned from Badii to my work for the last 67 years – my entire career”

At age 20, Calman Shemi immigrated to Kibbutz Carmia. He was already working as a professional sculptor by this time, and spent the next two decades living, working, and thriving in the area. At this time, wood and clay were his materials of choice.

Calman got lucky for a second time in Israel when he had the opportunity to study under another esteemed artist – the German-Israeli sculptor Rudi Lehmann. Lehmann deserves an article all of his own, so you  can definitely browse the internet if you are interested in learning more about him – which I would definitely recommend!

Moving on from Sculpture

So far, almost everything Calman had done artistically revolved around sculpture, but in 1977 he was keen to develop new skills and practices, and found himself stumbling upon new techniques that he had never before seen in paintings.

The original techniques developed by Shemi include “lacquer painting”, “window paintings”, and “soft painting”. His new works were immediately popular and has seen Shemi go on to host more than 70 solo exhibitions on every inhabited continent and in almost two dozen unique countries.

Some of Shemi’s most favorite and most notable exhibitions were held in the United States, France, Belgium, Japan, and several countries of the Middle East.

What are Calman Shemi’s Trademark Styles All About?

Hearing about how Shemi’s unique techniques came to be is fascinating all on its own, but what exactly do they involve? Let’s briefly explore each of the three previously mentioned examples in detail:

If I was going to take an accurate guess at what any of these techniques might involve, I think that lacquer painting would be the one I would be most likely to get right! Calman uses his trademark wide color palette on either wood or metal panels that have been decked out with gold or silver leaf. My immediate thought was “that sounds expensive”, but I was surprised at just how reasonable the prices for some of these works appeared to be.

After the painting phase has been completed, Shemi applies multiple layers of lacquer to the surface of the work until it gains a luminescent quality. Each coat of lacquer is followed by a hand-polishing to ensure an even surface and a uniquely glowing, shiny look.

Said to have been inspired by his childhood curiosity, Shemi’s window paintings are intended to appeal to the natural curiosity that lives in all of us. When we look through a window to the outside world, we never know what we might see.

Calman start’s his Window Paintings with a wooden box, which is painted throughout the inside. A hand-made wooden frame is attached to the box, creating the illusion of looking out of a window onto a room or landscape. Later, the frame will be gilded with the same gold or silver leaf used in his lacquer paintings, followed by the full lacquer painting technique.

With the addition of the lacquer painting on the outside of the box, a clear distinction is made between the inside and outside of the original, simple, wooden box, which has now acquired many additional levels.

The final technique we will mention here is the first that Shemi developed in 1977, marking his professional break from sculpture. The technique is now used by several other artists around the world, but Calman is universally agreed to have been the first to use it.

Soft paintings begin with a drawing, which is then colored, again using the bright, wide gamut of color for which Shemi has become so well known. Next, he layers fabrics of various textures, colors, and shapes, interlocking them with the background using a threadless 9000-needle sewing machine. These varied, multi-colored materials blend with one another to create a vibrant harmony of color.