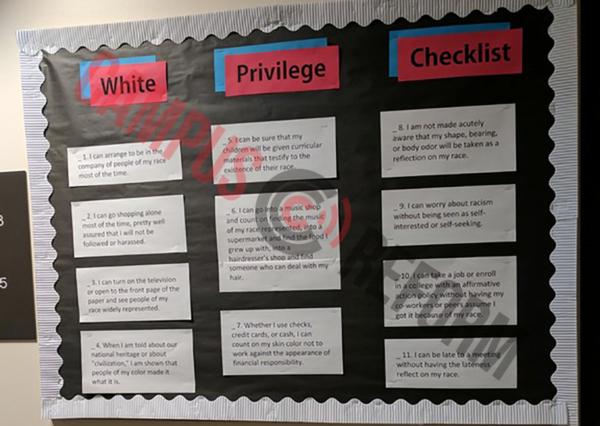 A display in a University of Minnesota residence hall provides an 11-point “checklist” to help students identify their “white privilege,” Campus Reform reports.

The “White Privilege Checklist,” found hanging in Mark G. Yudof Hall and photographed by a current student, features 11 statements that ostensibly apply exclusively to white people, according to the report.

“I can arrange to be in the company of people of my race most of the time,” the list begins, following up with references to being able to see “people of my color” or “people of my race” in popular culture and discussions of national heritage, explained Campus Reform. 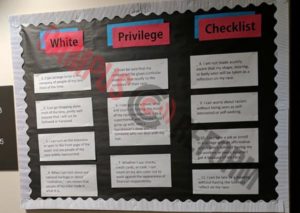 Evan Christenson, the student who photographed the board, told Campus Reform that he believes the display “attacks the individual and not the idea,” and doesn’t offer opportunities for dialogue about the issue.

“I do believe it crosses the line. When it attacks the individual and not the idea, there is a problem,” Christenson told Campus Reform. “I am not inherently racist because I don’t believe in white privilege. I believe there needs to be dialogue on the subject but it needs to more of a give and take and not a one-sided affair.”

Christenson also spoke to a larger “double standard” on campus, according to Campus Reform, pointing out that a Trump mural erected in September was vandalized and offended students were offered emotional counseling, yet the privilege board is displayed proudly in Yudof Hall.

“I still consider myself a social progressive but I am quite frankly appalled by the double standard applied to free speech as of late,” he asserted.

Campus Reform reached out to UMN for comment but did not receive a response by press time.