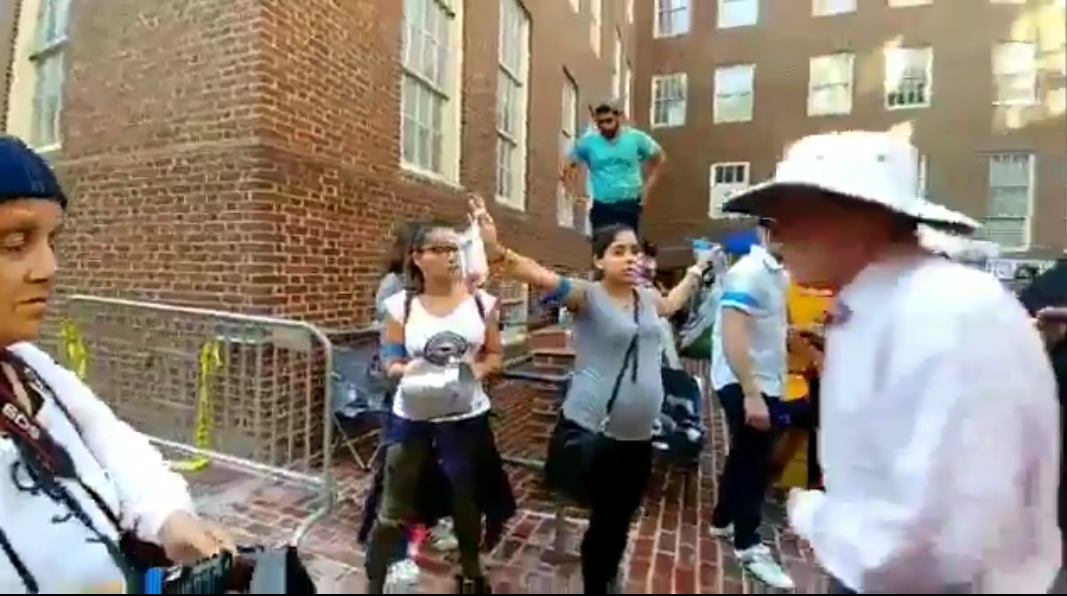 If you thought the struggle in Venezuela was limited to just Venezuela, you’d be wrong.

Demonstrations have been ongoing at the Venezuelan Embassy in Washington DC. Venezuelans in America who support the Guaido coup against Maduro have been protesting at the Embassy.

A group called Code Pink has been counter demonstrating in favor of maintaining the Maduro Regime. Code Pink is a group that bills itself as Anti-War and Pro-Socialism. So I suppose it makes sense that this group would oppose Venezuelans who want to overthrow a Socialist Dictator.

Code Pink is largely a female driven group, but there are male members who presumably virtue signal in hopes of getting laid.

One such member, a white male and tolerant Leftist who champions women and minorities decided to Whitesplain/Mansplain to a Venezuelan girl about how she was wrong in regards to the Venezuelan coup staged by Guaido.

Except he didn’t really explain anything. He physically assaulted her instead. The girl, Mariana Umaña is 27 weeks pregnant with a very visible (and beautiful) baby bump. But that didn’t stop this white male Leftist from physically attacking her over her support for the coup being staged in her own country of origin.

Umaña shared a short video clip of the incident.

Today I was attacked by a member of @Codepink. I'm 27 weeks pregnant and he knew that but he did not care. #OperacionLiberdad #OperationLibertyDC pic.twitter.com/gvCwaavFnn

Another activist named Nellie Belén Izarza posted a longer clip leading up to the incident, which shows there was no provocation, and the male from Code Pink simply became aggravated and began his assault.

Twitter account ‘Ask A Venezuelan’ posted a close up video clip of the offender being restrained and arrested by DC police.

#NOW outside of embassy: a Code Pink member is arrested for ATTACKING A PREGNANT OPPOSITION PROTESTER. And you claim to be peaceful, this is what Maduro supporters look like. Shame on YOU! #OperationLibertyDC #venezuela #OperaciónLibertad pic.twitter.com/B4uAUtT76d

This is yet another example of the Leftist phenomenon known as Gatekeeping. They claim to be the champions of women and minorities because they expect these people to fall into their ranks. The moment you fall out of line though, all bets are off. Even if you are approaching the 3rd trimester of pregnancy.

This Dictatorship is in a country full of starving people, where currency is weighed on a scale rather than counted, gun ownership is banned, and Maduro’s military runs over protesters with armored vehicles. Maintaining this system is so important to Code Pink that one of their members would assault a pregnant Venezuelan woman to make that statement.

Eric Swalwell Gets Into Twitter Fight With Austin Petersen, Gets McNuked