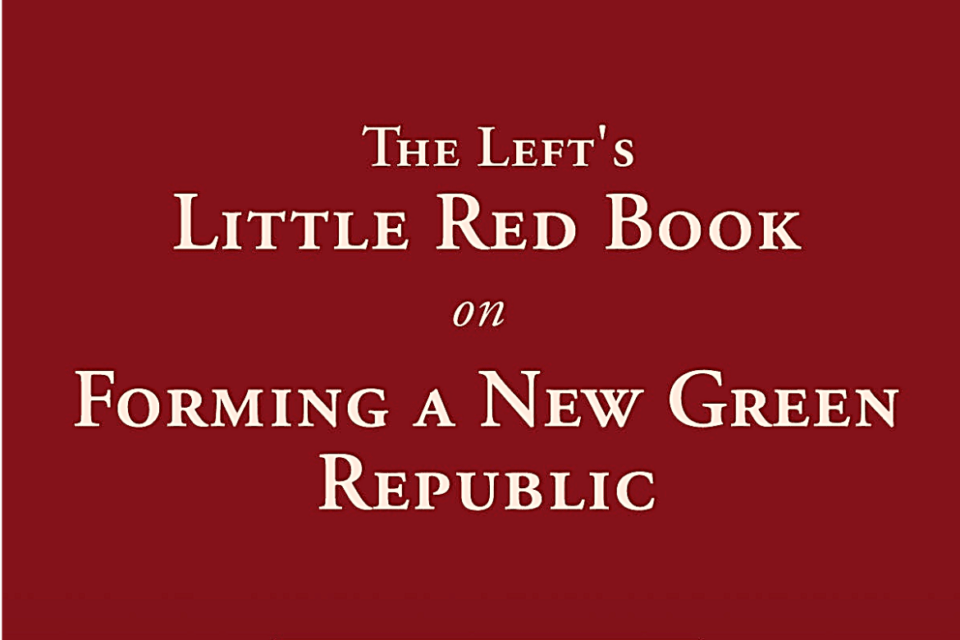 The radical Left vigorously claims its Green New Deal and regulations to control climate change will create a utopia with an abundance of free energy from the sun, bicycle paths for morning commutes, walking trails for contemplation, and magnificent pastures, unspoiled by pollution. A beautiful state of existence for the few select humans occupying it?

However when one reads the actual words of the Left, there is a disconnect between promises and intent. The Left manipulates words such as “green” (referencing environmentalism, a positive concept to many), to cover up its ‘red’ or socialist agenda (a negative concept to many). The manipulation of words is a proven political approach used to diminish freedom.

George Orwell noted, “Political language…is designed to make lies sound truthful…and to give an appearance of solidity to pure wind.” Thus, necessity, many times, requires those seeking power over us to corrupt words so we believe something other than the advocate’s true purpose.

My new book, The Left’s Little Red Book on Forming a New Green Republic, is a collection of quotes from the left that advocate “capitalism must go,” “truth is not relevant,” “humans must go to save the planet,” and that without following its mandates, “the world will end in twelve years.” In the day of Covid-19, it is frightening to read the words of Prince Phillip, Duke of Edinburgh – “If I were reincarnated, I would wish to be returned to earth as a killer virus to lower human population levels.”

Jacques Cousteau, one of the world’s most noted conservationists, using precise numbers, proposes, “World population must be stabilized and to do that we must eliminate 350,000 people per day.”

The reference to a “Little Red Book” alludes to Chairman Mao’s book of quotations: words proclaiming “truth” and a vision of utopia. His book educated the masses on politically correct thinking. Mao’s actions, however, were some of the most brutal in all of history.

The Left emulates Mao’s tactics. It preaches utopia and correct thinking while seeking domination. In 2020 America, The Left’s Little Red Book on Forming a New Green Republic describes how the political left use concern for the environment (Green New Deal, climate change) to attack capitalism and scare the country into socialism.

The Left’s Little Red Book captures the complex interrelationships between the radical Left, socialism, and environmentalism in under a half-hour, easy read. These small books are called “chapbooks.” They have been around since the 16th century, initially used as educational books. The Left’s Little Red Book is an educational effort to expose the words of the Left so citizens can compare the actual spoken words against the promises of “utopia.”

There is no substitute for understanding the Left other than reading its actual words. General descriptions of their words would not be believable in a society that protects the rights of citizens. Reading the actual words of the Left equips one to recognize how the Left is misleading the American people with a promise of a Green New Deal, and claims this is the moment “when the rise of oceans began to slow and our planet began to heal…”

The reader will quickly appreciate where the Left wants to take this country. The New Green Republic will be a perfectly designed political state with a well-functioning regulatory machine that ensures “politically correct-thought” by the “masses.”

Of the literally millions of statements by the Left on the benefits of their Green New Deal and the regulation of society to “reduce the impacts of climate change,” there is not one utterance about the rights of people in a society. Every statement by the Left “puts us in our place,” “tells us how to live,” and “what to think.” The quotes from the Left merely confirm its goal of creating a country where free people cannot live.

To quote Peter Berle, president of the National Audubon Society, 1985-1995, “We reject the idea of private property.”

Welcome to the New Green Republic!