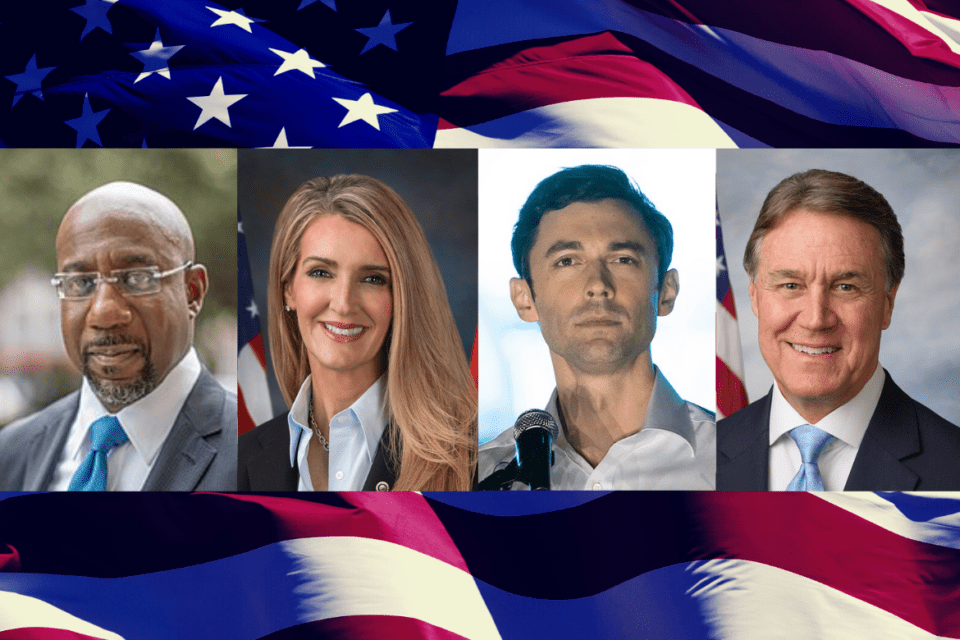 If there is a time and place to fight for freedom and defeat of socialism, it is the two Georgia Senate runoff races on January 5, 2021. It is up to Georgians to stop socialism in the U.S. before it starts.

There is nothing in the U.S. Constitution, prohibiting socialism, a political/economic theory advocating government ownership or regulation of the means of production, distribution, and exchange, from being our economic way of life.

Gallup finds 43% of Americans view “some form” of socialism acceptable. Citizens increasingly support universal health care (45%-41%) and are now almost split on providing citizens a basic level of income support (40%- 43%). Both political parties spend and regulate as if socialists. Big corporations lobby hard for bailouts to socialize losses. A Democrat-controlled Congress will create the conditions necessary to replace free enterprise with socialism.

Currently, the U.S. Senate is 50 Republicans, 48 Democrats, 2 Georgia vacancies, and a Democrat vice president to break ties. Should Democrats win the two Georgia Senate seats, they will control the Senate, the White House, and the House of Representatives. Such control allows them to radically change government and quickly repeal Trump’s deregulatory efforts.

Republicans must win one of the Senate seats to maintain control of the Senate and the ability to limit any aggressive Democrat agenda by ignoring House legislation.

The election will be a close call. The polls have Republican Purdue leading Democrat Ossoff by 0.8%. Democrat Warnock and Republican Loeffler are tied.  Money is pouring into the race.  Republicans hold a substantial cash advantage. Democrats, however, have an extremely organized voter registration effort and door-to-door ground game.

In the 2020 presidential election, over 5 million Georgians voted out of 7. 4 million registered voters. Georgia registered all but 2% of eligible voters. Turnout dramatically increased from 59% to 67%. The wildcard is that 31% of eligible voters did not vote. That is almost 2 million voters that can be recruited to vote in January. More than enough to propel either side to victory.

Our Constitution is flexible enough for socialism

Other than individual liberties protected by the Bill of Rights, and several voting rights amendments, our Constitution is a framework of provisions so broad and vague as to allow massive federal powers, including powers over commerce and the economy.

The federal government can create money, lay and collect taxes, borrow and spend money, regulate commerce, declare war. call forth the militia to execute the laws of the union and make all laws necessary and proper to implement all constitutionally vested powers.

There is not a word in our Constitution requiring the government to foster free enterprise. One major limit on government power is that it cannot take our property without due process of law, and must provide just compensation if it takes it and the owner prevails in complex, expensive litigation. Moreover, the federal government can tax us as much as it needs to satisfy its wants. From 1932 to 1981, the marginal tax rate in the U.S. ranged between 63% – 91%.

How socialists will impose socialism on the U.S.

If the Democrats control the White House and Congress, they will first repeal the Senate filibuster rule to achieve their goals without negotiating with Republicans.

Presently, the Senate is a body of patience, procedure, and decorum. Its filibuster rule allows any Senator to slow-down or obstruct legislation on the floor, almost indefinitely. The filibuster can only be broken by a supermajority vote of 60 Senators. Over the last decade, the use of the filibuster has been narrowed, removing lower court judges and political appointees from its application. Last year the Senate ended its use for confirming Supreme Court justices.

The last vestige of the Filibuster applies to legislation. By eliminating the filibuster for legislation on the floor, the Senate is immediately transformed into a second House of Representatives, allowing legislation to easily be “rammed-through” by a majority vote.

What legislation will Democrats enact?

Additional funding of at least $ 2-3 trillion for Covid-19 relief to people, small businesses and to bail out states having debt for many reasons, including generous pension benefits.

A Biden proposed budget of $7 trillion, offset by $ 4 trillion in new taxes.

“Democracy Reform,” legislation designed to expand the power of government through a national voter registration program, and public financing of federal campaigns.

The District of Columbia and Puerto Rico will be given statehood. Since both would be Democrat states, it is likely the Senate will remain in Democrat control for many years.

The National Popular Vote Interstate Compact will receive formal consent. It is an agreement between a combination of states, governed by Democrats, that comprise 270 electoral votes. Each participating state agrees to cast their presidential electoral votes for the winner of the national popular vote, notwithstanding the popular vote of the respective states. In essence, this eliminates the Electoral College.

Enact the ProAct which expands the universe of workers subject to being unionized by establishing union dominance in the workplace and the elimination of state right-to-work laws.

Climate Change and Green New Deal legislation, the initial cost of $ 2 trillion, in the form of subsidies for renewable energy and infrastructure.

Easing or eliminating requirements on immigration, and providing free health care and education for illegals.

What to expect from the Executive branch?

Regulations and Executive Orders will be used along with new legislation to foster socialism. It is anticipated that a Biden administration will quickly reverse the 277 Trump deregulatory rules by reinstating prior Obama rules. These regulatory reinstatements would be in the environment, energy, climate change, labor, immigration, and the economy.

Since Congress has given the president power to declare national emergencies it would not be unexpected if a president Biden declares a “national emergency” to control the activities of Americans, including internet communications, gatherings, domestic unrest, and increased spying. Also using the Defense Production Act, the President can mandate production and supply activities; allocate materials and services; implement wage and price controls, and control credit.

The business community will immediately fall in love with this new America. It will be “…the largest step toward a centrally planned economy the U.S. has ever taken.

In a very short time, we could be living in a radically different country.

What changes occurred in the sales of firearms due to COVID-19?