What I Learned While at the Iowa Democrat Debate 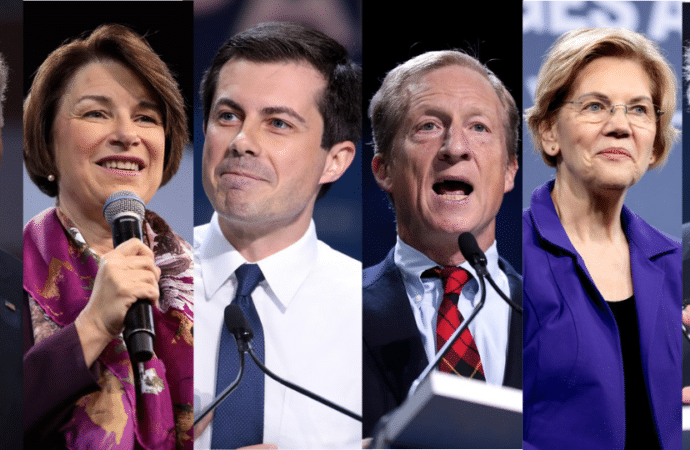 First off, Amy Klobuchar is still running. Seriously. That genuinely surprised me.

In all seriousness, I went to the Democrat debates in Iowa all the way from St Louis in order to bring light to the fact that one of the biggest unions in America, Service Employees International Union (SEIU), has several cases of sexual harassment against them and it’s being ignored by the media. I ended up sticking around for a few more hours because I wanted to gain some insights on different candidates, their followers, and campaigns.

1. The Iowa caucuses are either not nearly as big of a deal as people make them out to be, or no one is excited for the Democrat primaries.

2. The campaigns that you might think are dead are actually still full of energy, but the media isn’t covering them.

One fine, but expected, example was the ‘Yang Gang’. A group of his followers were walking around the campus in less than 20 degree weather, shouting chants, singing, dancing, literally anything in order to get some media attention. That’s not to say it helped them as most of it was incredibly cringy, but I commend their efforts.

The Klobuchar campaign was one I didn’t expect much enthusiasm from, but prior to the debate there was a decently sized group marching around the campus, loudly proclaiming their support for Klobuchar. The reason I was surprised is because the media really hasn’t been covering her.

The mainstream media seem to be covering the moderates that are expected to win, and every now and again they unfairly cover the more radical candidates that aren’t expected to win, such as Gabbard or Yang. Klobuchar seems to be moderate by Dem standards, but just doesn’t get the coverage that Warren and Biden get, so many don’t expect her win and I agree with that sentiment.

3. This is just my overall impression of the three campaign watch parties that were on campus.

Warren, by far, had the largest turnout and was the most diverse in terms of age. I saw people as young as college students all the way up to Baby Boomer age at her watch party.

Klobuchar had a decent turnout, probably anywhere from 50-75, but hers was much more formal with dinner tables set up and alcoholic drinks available. The vast majority of people in attendance at her watch party seemed to be white and middle aged or older.

Buttigieg’s watch party had an even lower turnout with only around 40 people. It was in a literal movie theater on campus (video below), which I really don’t think helps his whole “wine cave fundraiser” look right now.

In terms of race, all of the watch parties were really lacking minorities. Out of the roughly 100 people I saw at Warren’s party only 10 or so were minorities, I only saw one at Klobuchar’s party, and only one or two at Buttigieg’s. Buttigieg, however, did have a decent showing of the LGBT community.

Warren’s campaign was the only one actually good at collecting the names of supporters because they required people to sign in before they entered the party. The Buttigieg and Klobuchar campaigns were incredibly passive, and if that continues, it will cost them.

4. All of the parties were full of people that I am convinced severely lack original thoughts. Any idea suggested by their candidate, no matter how bad an idea or if they only recently started supporting that idea because it’s politically convenient *cough* (being anti-war) *cough* garnered massive shouts of joy and applause. Possibly the only thing these people worship more than the candidate they were there to support, is the State that they all want to continue to grow and oppress all.

5. The people I thought that I would trigger and I thought would hate me were actually incredibly civil. For those that don’t know me, I am a fairly libertarian, straight, devout Catholic that doesn’t hate Donald Trump.

I met one person, who was, by their own definition, a “far-left, non-binary, atheist that didn’t care who got nominated as long as they would beat that f*cker (Donald Trump).” Upon finding out I was a Trump supporting libertarian Republican, this person was a little surprised, but didn’t really change their opinion of me. We sat there for 45 minutes and had a civil discussion about politics, where we agree, funny campaign stories, where there is miscommunication between the two sides, and much more.

It gave me hope for humanity as we sat there, complete opposites, but talking as if we’d been good friends for a while. Before I left I told them we should stay in touch, if for nothing else than just that it’s cool to meet another civil human being. So we agreed to follow each other on Twitter and that’s when they told me something that frustrated me.

My new acquaintance joked in a very serious way that following me would get them “cancelled” because I am so “extreme” in my views. The left truly isn’t made up of all of these extremists that want to silence the right, and anyone that is even slightly friendly and willing to listen to us.

I urge everyone everyone to call this crap out. When you see someone getting ‘cancelled’, no matter how much you disagree with them, attack the people doing the cancelling. It may just be some far right winger today, but we’ve seen how the left always starts there and slowly moves into taking out the more moderate. Defend freedom of expression before it’s gone.

7. Finally, Elizabeth Warren was kind enough to give her supporters a preview of the food supply under her economic system.

At Elizabeth Warren’s watch party at Duke, and just like under her economic policies there isn’t enough food for everybody #DemDebate pic.twitter.com/krHDadAOsD