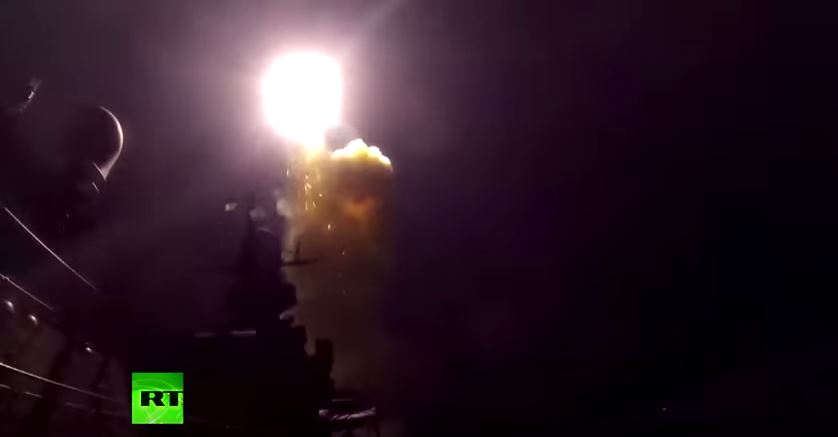 With a show of force and technical sophistication, the Russian military launched 26 cruise missiles from the Caspian Sea, hitting 11 targets in Syria as part of a coordinated air, sea, and land attack meant to bolster the embattled and bloodied Assad regime’s position in the country.

The attack was not only of show of technical sophistication but also a display of Russia’s growing strategic alliance with the countries of the “Shia Crescent”: Iran, Iraq, and Syria. The missiles–Russia’s new SSN-30A Kalibr which can be equipped with both nuclear and conventional warheads–traveled 900 miles from the Caspian Sea over Iranian and Iraqi airspace before hitting mostly non-ISIS targets in Syria.

Russia’s strikes are not only meant to display a willingness and ability to back their Middle East allies, but also allows the Putin regime to project “strength” to the West as well as to the Russian people themselves.

The naval strikes on Wednesday were the first known operational use of state-of-the-art SSN-30A Kalibr cruise missiles, which were still being tested by the Russian navy in August.

“We know how difficult it is to carry out this kind of anti-terrorist operation,” Putin told Shoigu. “Of course, it is early to draw conclusions. But what has been done so far deserves a highly positive assessment.”

Watch the strikes below as provided by the Kremlin controlled RT:

BREAKING: Kevin McCarthy Drops Bid to be Speaker of the House

Palestinian “Educational” Video: How to Kill an Israeli