A Cold War of words between the United States and Russia appears to have gone physical as the United States and NATO forces have moved to the Russian border in response to Russian President Vladimir Putin’s recent aggression with what are being called “nuke-ready” missiles, reports The Sun. 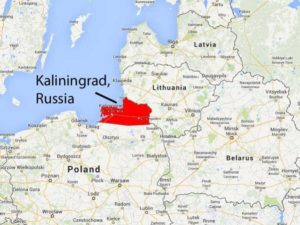 The report from The Sun states that Putin is deploying his nuclear apt missiles to the province of Kaliningrad, which sits between Belarus, Lithuania, and Poland.

The Lithuanian Defense Ministry spokeswoman Asta Galdikaite has also confirmed that the US has offered additional military support in response to Russia having annexed Crimea. The rival nation started this endeavor back in 2014.

“The United States was the first to offer additional safety assurance measures to the Baltic countries following the deterioration of the security situation in the region after the annexation of the Crimea,” said Galdikaite

Galdikaite explained to Express that the US presence in Lithuania was responsible for being a “deterrent” to Putin and his state’s aggression in the region.

The US involvement in the Baltics is nothing new. In fact, US military Chief General Raymond T Thomas described its presence in the region as “persistent” to the New York Times. The General also explained that the Baltic states are “scared to death” of Putin’s Russia and that they are “desperate” for the US’s leadership.

According to the same NYT piece, the US and NATO will send up to 1,200 troops to Latvia, Lithuania, Estonia and Poland respectively. All will be completed by spring time this year.

The Lithuanian foreign minister Linas Linkevicius has confirmed Russia’s “terrifying” presence in Kaliningrad, explaining that “Iskander missiles capable of carrying nuclear warheads have been deployed. There are S-400 missiles and modernised jets.”

Linkevicius, along with calling for NATO to act and offer support to Ukraine, has called Russia’s behavior “military hooliganism.” In fact, he said that “Russia likes to create problems, conflict and then suggest some ideas how to mitigate, how to mediate – and some of our colleagues say ‘look they are cooperating’.”

It would seem that tension between the Baltic States and Putin are just as “sour,” or even worse, than his relationship with the outgoing Obama administration and the US. The contention between superpowers has made the world weary. It appears to have potentially set the stage not just for a second Cold War, but as a potential catalyst for a third World War.

Mattis May Have Had His First Break With Trump