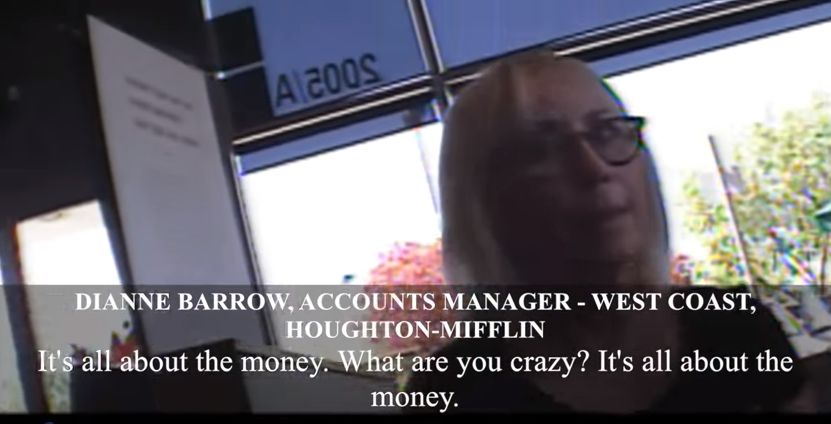 In the video, Barrow says “I hate kids” and claims booksellers only care about making money, not about the specifics of education policy.

Barrow said the situation was no different with her prior employer, Pearson Education, which she said engaged in unspecified “underhanded” behavior. Besides commenting on her employers’ motivations, Barrow also criticized homeschooling and charter schools.

“Home schoolers, I’m sorry, did you go to school to be a teacher?” she said. “Well, then don’t teach your kids.” She also attacked Donald Trump, saying he appealed to “old white men” frustrated with their lives.

In the video, O’Keefe claims the footage demonstrates corrupt motivations for textbook publishers, who lobby for states to adopt Common Core so that said states must they spend huge sums to buy new, Common Core-aligned textbooks.

It’s not really clear that’s the case, though. Even Barrow says Houghton Mifflin didn’t have anything to do with Common Core’s adoption.

“No, they didn’t lobby for [Common Core] to be put in place, but they lobby – but now they go after the money,” she said.

The video also briefly shows two teachers in New York, who complain vociferously about Common Core and claim the system was created for the benefit of textbook publishers.

“It’s all a money game,” said teacher Jodi Cohen from Brooklyn. It’s unclear whether Cohen has any particular expertise on the matter, other than being a teacher.

In response to the video’s release, Houghton Mifflin fired Barrow on Tuesday morning. In a statement given to the Daily Mail, the company said they were “appalled” by Barrow’s remarks, but still criticized O’Keefe, saying Barrow had worked for them less than a year.

The video is the latest of many by O’Keefe’s Project Veritas attempting to expose outlandish behavior in the world of education. Last year, he released a series of videos that purported to show college administrators willing to help students funnel money to ISIS, though the videos were criticized for being misleading and exploitative.