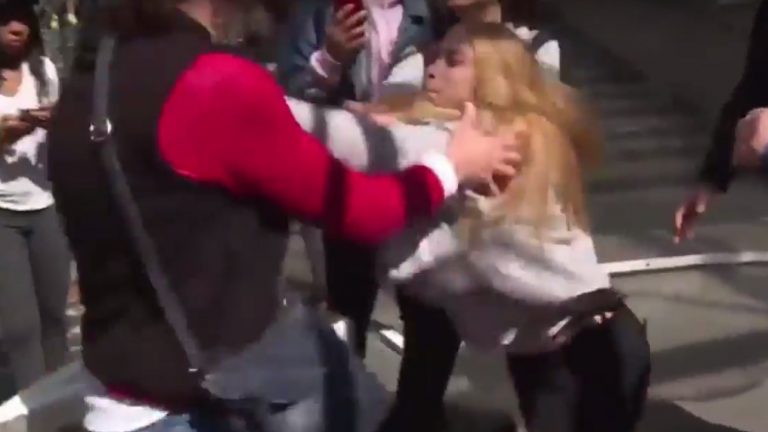 A video has emerged of a Trump supporter being physically attacked  after her sign was grabbed and torn outside the Oscars awards show Sunday in Hollywood.

The woman, whose sign read “Jobs! Jobs!,” is shown walking toward another woman, apparently yelling something in her direction. That was when the woman snapped, grabbed the pro-Trump sign, ripped it apart and start to physically attack Trump supporter.

The Trump supporter did not take the attack lying down and the two ladies were soon involved in a full on fisticuff. The video then shows a second lady, apparently a friend of the woman who ripped the pro-Trump sign apart, jumped in and even hugged the attacker as a police officer was making his arrest. Police can be heard telling the friend that she needed “to let go, or I will put you in handcuffs.”

The same video also shows another confrontation involving the attackers friend, and a male Trump supporter who told her she’s “fake and phony” and has “no respect.”

The Blaze reports that the incidents were reactions to a larger protest and boycott of the Oscars.