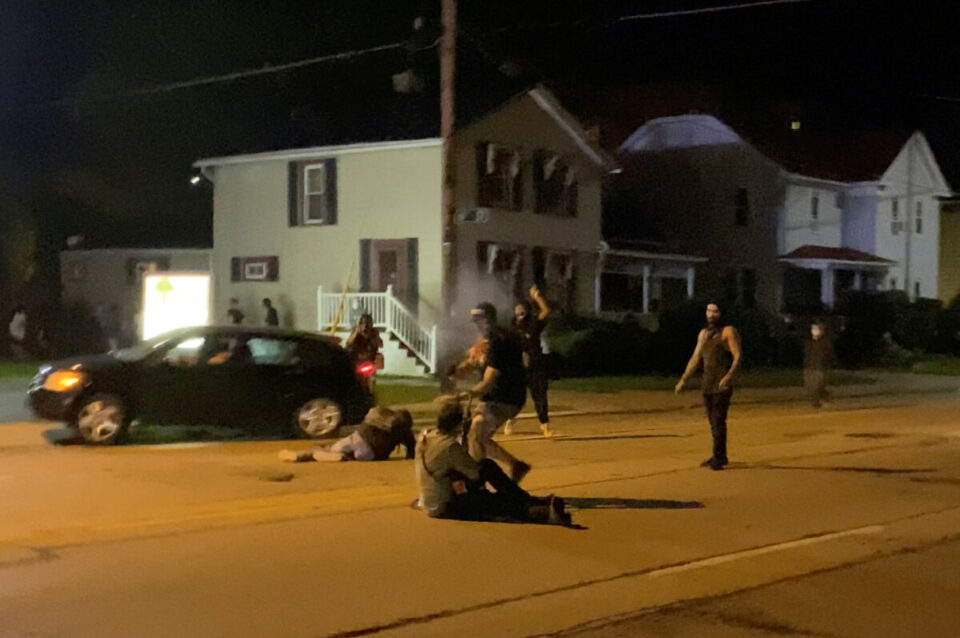 New details have emerged about the recent shootings in Kenosha, Wisconsin, painting a fuller picture of both the accused gunman and the three men who were shot.

Kyle Rittenhouse was accused of shooting and killing one man near an auto body shop after being chased around midnight going into Wednesday morning, according to a criminal complaint obtained by Axios. The 17-year-old ran into the road, tripped and fell to the ground and allegedly fatally shot another man in the chest and a third in the arm, the complaint stated.

Rittenhouse was arrested Wednesday in Illinois and charged with first degree intentional homicide for the shootings, which occurred during unrest stemming from the police shooting of Jacob Blake. Rittenhouse’s charges were updated Thursday to add additional counts, including attempted intentional homicide and two counts of recklessly endangering safety, according to CNN.

“So people are getting injured, and our job is to protect this business, and apart of my job is to also help people,” Rittenhouse told the Daily Caller’s Richie McGinniss in an interview roughly two hours before the shootings.

“If there’s somebody hurt, I’m running into harm’s way,” he continued. “That’s why I have my rifle because I need to protect myself, obviously. But I also have my med kit.”

He was was reportedly an avid Blue Lives Matter supporter who enrolled himself in a program for youth interested in police work, according to Insider.

Joseph Rosenbaum, 36, was chasing Rittenhouse and threw what appears to be a plastic bag at the teen, according to video footage and the complaint, which also notes a loud bang was heard. An unknown person fired a handgun pointed at an upward angle, according to a New York Times analysis of video footage.

Four additional bangs are heard, and Rosenbaum drops to the ground, video shows. McGinniss then attempted to administer aid.

Rittenhouse then circled back through the parking lot and passed the man who took one of the videos. He appeared to say “I just killed somebody” while on the phone, according to the complaint.

Rosenbaum suffered gunshot wounds to the groin, back, thigh and a grace next to the forehead, according to the complaint. He was pronounced dead at 12:47 a.m., Wednesday, the complaint stated.

Rosenbaum was convicted of sexual conduct with a minor in 2002, according to the Wisconsin Department of Corrections sex offender registry, government records showed. A photo of the registrant matched Rosenbaum’s likeliness, as did his middle initial.

Rosenbaum was removed from the registry due to his death, the Wisconsin Department of Corrections’ deputy director of communications, Anna Neal, told the Daily Caller News Foundation in an email.

Rosenbaum also had two open cases in Kenosha: one on bail jumping and another on battery, two counts of domestic abuse and disorderly conduct, according to court records.

A friend of Rosenbaum told the Milwaukee Journal Sentinel that Rosenbaum was shot in the head and a GoFundMe has raised over $17,000 at the time of reporting to cover funeral costs.

Rosenbaum was reportedly from Texas and moved to Kenosha recently, The Sentinel reported.

“May you forever be with the angels and rest easy bro. I love you!” his sister wrote on Facebook, according to the local outlet.

The Chicago-Sun Times highlighted Rosenbaum, who is called “Jo Jo” by friends, as the father of a 2-year-old.

Another video shows Rittenhouse running in the street as people pursued him yelling “Beat him up!” “Get him!” “Get that dude!” and “Get his ass!” among other things, the charging document read. Rittenhouse then tripped and fell to the ground as the mob in pursuit gained ground on him, video showed.

One unidentified man appeared to stomp on the boy’s head and Rittenhouse seemingly fired a shot at him, but missed, according to video.

Anthony Huber, 26, then leaps onto Rittenhouse and strikes him with a skateboard with one hand and reaches out with another, the video shows.

“Huber appears to be trying to grab the gun,” the complaint states. “The defendant then fires one round which can be heard on the video.”

Huber was shot in the chest, killing him, according to the complaint.

In 2012, Huber was found guilty of felonious strangulation, two counts of domestic abuse, false imprisonment and use of a dangerous weapon, records show. Huber was again found guilty in 2018, this time of disorderly conduct, domestic abuse and repeat offender charges, according to online documents.

The court documents show the defendant was a Kenosha resident, would have been 26 at the time of the shooting, and shares a middle initial with the man who died this week.

“He was one of the most amazing people,” Huber’s girlfriend Hannah Gittings said in front of a crowd the same day he was  shot fatally, according to the Sun-Times. “He had so much love in his heart for this city … he took down an armed gunman with nothing but his f——— skateboard, and he took that f——— bullet.”

A memorial service was held for the skateboarder at a park and attendees etched “you’re a hero Huber!” on one of the park walls, the Sun-Times reported. A GoFundMe organized for Huber has raised over $137,000 at the time of reporting.

“Anthony [Huber] is an American patriot and we should all be so lucky to have folks like him to defend this country from White Supremacists,” a comment on the fundraising page read, according to the Sun-Times. The commenter provided no evidence that Rittenhouse is or was a white supremacist.

Rittenhouse fired one round, striking Grosskreutz in the upper forearm, the complaint states.

Grosskreutz sustained a grizzly wound after taking a round to the upper forearm and subsequently ran away, shouting for a medic, video shows.

Grosskreutz was found guilty in 2016 of carrying a firearm while intoxicated — a misdemeanor charge, according to court records.

The 26-year-old was reportedly part of the social justice group the People’s Revolution Movement, according to the Sun-Times.

“His whole reason for being out here was to provide medical services to protesters in Kenosha, and when Gaige tried to detain [the active shooter], he got shot in the arm,” a fellow protester told the local outlet.

Rittenhouse is seen on video slowly backing away from the incident location. He approaches police with his hands up, but they drive past to assist victims, according to The New York Times.