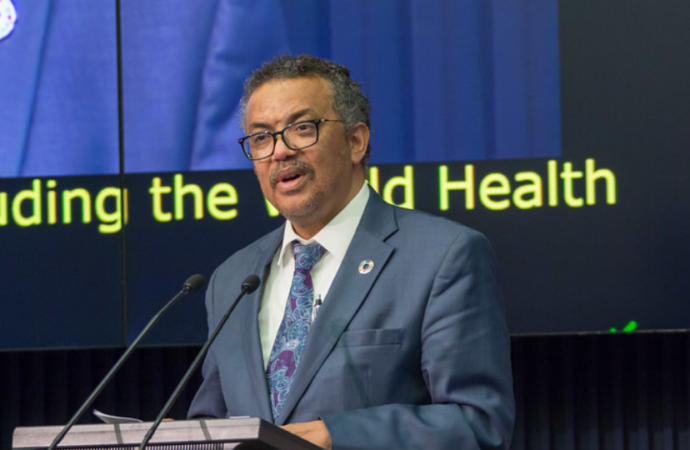 –  Tedros praised China’s “transparency” and said China’s response to the virus was a model for other nations, though China tried to cover up the virus’s outbreak and silenced whistleblowers.

–  Tedros is the first-ever WHO chief not to be a medical doctor and was accused of covering up three different cholera epidemics as Ethiopia’s health minister.

World Health Organization (WHO) Director-General Tedros Adhanom Ghebreyesus won his post after China backed him in the May 2017 election.

Now, Tedros is leading the WHO, an arm of the United Nations, in providing cover for China’s oppressive regime as it attempts to shirk responsibility for the global coronavirus pandemic.

Despite all evidence to the contrary, Chinese authorities are weaving a false counternarrative in which China was actually the victim of a foreign virus that it quickly moved to contain. And the WHO is helping them do it.

Tedros has praised China’s “transparency” and held up the country as a model response  — even though the communist regime covered and then concealed the severity of the outbreak.

Chinese authorities forced scientists who discovered the virus in December to destroy proof of the virus, U.K. newspaper The Sunday Times reported. The Chinese regime also punished doctors who tried to warn the public in the outbreak’s early stages and suppressed information about the virus online. A Chinese real estate mogul who criticized his government’s response has since gone missing.

Approximately seven million people left Wuhan in January, spreading the virus all over China and all over the world, before China restricted travel to Wuhan on Jan. 22, The New York Times reported Sunday.

One study found that “if interventions in [China] could have been conducted one week, two weeks, or three weeks earlier, cases could have been reduced by 66 percent, 86 percent and 95 percent respectively – significantly limiting the geographical spread of the disease.”

The WHO echoed China’s false talking points about the potential for human-to-human infection during the early stages of the outbreak. “Preliminary investigations conducted by the Chinese authorities have found no clear evidence of human-to-human transmission of the novel #coronavirus (2019-nCoV) identified in #Wuhan, #China,” the WHO tweeted on Jan. 14.

The very next day, America’s first documented coronavirus patient arrived back in the U.S. after traveling to Wuhan, according to the Centers for Disease Control and Prevention’s timeline.

Tedros praised China’s disastrous handling of the pandemic as an example for the rest of the world to follow. “China is actually setting a new standard for outbreak response,” he said on Jan. 30, shortly after returning from a trip to Beijing.

“Tedros apparently turned a blind eye to what happened in Wuhan and the rest of China and, after meeting with Xi in January, has helped China to play down the severity, prevalence and scope of the COVID-19 outbreak,” University of Texas-San Antonio professor Henry Thayer and Citizens Power Initiatives for China vice president Lianchao Han wrote in a March 17 op-ed published in The Hill.

The pair called on Tedros to resign, adding: “From the outset, Tedros has defended China despite its gross mismanagement of the highly contagious disease. As the number of cases and the death toll soared, the WHO took months to declare the COVID-19 outbreak as a pandemic, even though it had met the criteria of transmission between people, high fatality rates and worldwide spread.”

The WHO is now touting China’s claims to have reduced the number of new infections in Wuhan to zero. But Chinese officials are, once again, fudging the numbers for propaganda purposes, a Wuhan doctor told Japanese media company Kyodo News.

He worked closely with China during his time as Ethiopia’s health minister, and China backed Tedros’s 2017 bid for WHO director-general, media outlets noted at the time.

Tedros won the election despite widely covered accusations that he covered up three different cholera epidemics as health minister in Ethiopia. Though he goes by “Dr. Tedros,” the WHO chief isn’t a medical doctor but has a PhD in public health.

Just months after taking over at the WHO, Tedros tapped former Zimbabwe dictator Robert Mugabe, a notorious human rights violator, to be a UN Goodwill ambassador and only backed down after an international outcry.

“Diplomats said [Mugabe’s] appointment was a political payoff from Tedros Adhanom Ghebreyesus — the WHO’s first African director-general — to China, a long-time ally of Mugabe, and the 50 or so African states that helped to secure Tedros’s election earlier this year,” Sunday Times columnist Rebecca Myers wrote in October 2017.

“Chinese diplomats had campaigned hard for the Ethiopian, using Beijing’s financial clout and opaque aid budget to build support for him among developing countries,” she added.

Washington Post columnist Frida Ghitis similarly noted at the time that China “worked tirelessly behind the scenes to help Tedros defeat the United Kingdom candidate for the WHO job, David Nabarro. Tedros’s victory was also a victory for Beijing, whose leader Xi Jinping has made public his goal of flexing China’s muscle in the world.”

The WHO and China’s Embassy to the U.S. didn’t respond to repeated requests for comment for this article.

While Tedros has covered for the Chinese regime throughout the ongoing coronavirus pandemic, he hasn’t hesitated to criticize the U.S. and other China adversaries for their coronavirus response, as Michael Collins, a research associate for Asia Studies at the Council on Foreign Relations, noted in a Feb. 27 blog post.

On Feb. 3, Tedros rebuked the U.S. and other countries that had closed off their borders to China when it became clear that the communist nation wasn’t containing the virus’s spread.

“There is no reason for measures that unnecessarily interfere with international travel and trade. We call on all countries to implement decisions that are evidence-based and consistent,” he said.

The day after President Donald Trump referred to the coronavirus as a “foreign virus,” the WHO implicitly rebuked him.

“Kind quick reminder: viruses have no nationality,” the WHO wrote in a March 17 tweet that was quickly amplified by Chinese state media outlet Xinhua News.

A WHO official later rebuked Trump again on Wednesday.

“Viruses know no borders and they don’t care about your ethnicity, the color of your skin or how much money you have in the bank,” said Mike Ryan, the executive director of WHO’s Emergencies Program.