By the professional player, R. Brownell

King of the “InfoWarriors”, Alex Jones is the undisputed king of the conspiracy world, currently drawing millions of fans to his radio show, and websites “infowars.com” and “prisonplanet.com”. Though Jones is popular amongst some in the libertarian community for his constant fighting against government secrecy, Jones has been known to make some accusations too ridiculous for even the most die-hard InfoWarriors to process; like blaming the recent Tennessee tornado on weather machines made by the federal government, and most popular, the New World Order scheme to enslave the world. Whether Jones is bad or good for the liberty movement is up for debate, but what is clear is that certain behaviors aren’t good for drawing newcomers into the fold, like this interview with CNN’s Piers Morgan for example…

He also managed to give editor Austin Petersen his, now-infamous, nickname “Leif Bieberson,” by attacking him in a ten minute whackfest that is guaranteed to make you laugh. 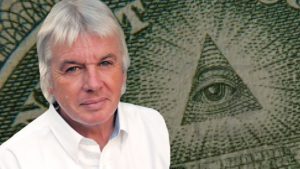 Has anyone ever told you that the world is controlled by a secret society of reptile people? If not, meet David Icke, who has accused every corporate executive, political leader, and every travesty from the Holocaust to 9/11, as being part of an elaborate scheme to manipulate the actions of mankind.

Time Magazine went into a little more detail when talking about Icke’s reputation as a conspiracy trailblazer, whose only motivation was spreading his version of the “truth”, and not for reasons like…I don’t know…. merchandising?

The conspiracy theorist and New Age philosopher, who wore only turquoise for a time and insisted on being called Son of God-Head, says these “Annunaki” (the reptiles) have controlled humankind since ancient times; they count among their number Queen Elizabeth, George W. Bush, Henry Kissinger, Bill and Hillary Clinton and Bob Hope. Encroaching on other conspiracy theorists’ territory, Icke even claims that the lizards are behind secret societies like the Freemasons and the Illuminati. Since earning the dubious title of “paranoid of the decade” in the late 1990s, Icke has written several books on the topic, including his latest work, The David Icke Guide to the Global Conspiracy, while operating his own website — complete with merchandise and advertisements. 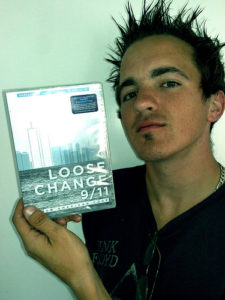 One of the most influential 9/11 truthers to date, Dylan Avery gained overnight fame due to his documentary “Loose Change 9/11” which accused the US government of planning and executing the 9/11 attacks in order to justify war in the middle east. Gaining millions of fans from around the world by convincing viewers that the 9/11 attack was an inside job, Avery began to even gather a celebrity fan base with such geniuses as Charlie Sheen and Alec Baldwin.

Avery reportedly began the project as a fictional movie about a conspiracy, before he was approached by a man who allegedly paid him to turn it into a “documentary.”

Conspiracy buff Phillip Jayhan ambles into Dylan’s life, waving around a sweaty wad of money. Jayhan, by the way, says the world is run by a massive satanic cult that enslaves prominent politicians by delivering kidnapped boys for them to molest and then blackmailing them about it later.

Okay, that’s probably true. But the point is Jayhan offered to pay for Avery to get his little film off the ground. Only, the thing is, Jayhan didn’t think it was fiction. Jayhan, who believed in every available conspiracy prior to 9/11, believes that the WTC planes had missiles on them that were fired at the towers and that’s why they fell down. Oh, and also there were bombs in the towers. Or something.

Avery, realizing now that the financial future of his film and his dreams of fame and fortune lie entirely in selling Loose Change as a factual documentary, miraculously discovers that, in fact, the plot behind 9/11 is real.

After all, which is going to have a bigger impact on you:

A friend who comes to work and says, “dude, I totally sat down and wrote a ghost story last night, wanna read it?”

The same friend running up in a panic and saying, “DUDE, A FUCKIN’ GHOST SHOWED UP IN MY HOUSE LAST NIGHT!!!”

You’re going to get the same story either way. But it’s a much bigger impact if he presents it as fact. Now, if his goal is just to be creative, he’ll have no problem admitting it’s fiction and letting people criticize it as such, even if it means the work goes unnoticed. But if he’s Dylan Avery, and his goal is to become famous, he’ll do the one that he knows will get him noticed. From that point on, Loose Change was a “documentary.”

And man, it got Dylan Avery hella noticed.

Recently though, Avery caused a massive schism in the 9/11 conspiracy community when he came out and said that he was probably wrong about the entire thing:

“I don’t think Bush could plan a bowl of cereal,” he says… 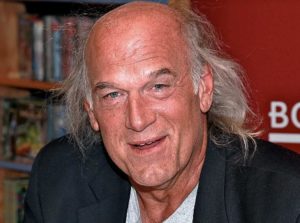 When he isn’t suing widows for millions of dollars because he got his feelings hurt due to his tiny heart syndrome, Ventura spends his days spewing nonsense about how the Nazi’s pioneered water flouridation and how FEMA plans on enslaving mankind. Ventura managed at one point to host his own conspiracy themed TV show, which ended up getting cancelled early on in the show’s run, the reason? Its a conspiracy bro…. 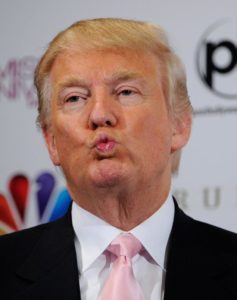 It’s sad when smart men get obsessed with stupid things; Donald Trump managed to cause a large majority of his fan base to either cheer him on or scratch their heads when good ol’ Trumpy relentlessly pursued documentation that Barack Obama was an actual US citizen, and not secretly a Muslim born in Kenya or something like that. This tell-tale hobby was picked up by Trump during the 2008 and 2012 election. However, the Comb-Over-King is an equal opportunist, recently targeting conservative senator from Texas and current Republican candidate for president in 2016, Ted Cruz.

While the other contenders on the list boasted weather machines, secret societies, and lizard people, an argument can be made that our winner’s pseudo science fear campaign may have actually gotten people killed as a result.  Jenny McCarthy was the face of the anti vaccine campaign in which she was pushing that flu vaccines were causing young children to develop autism and other debilitating side effects. 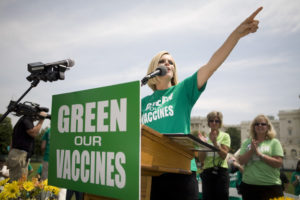 “Time magazine’s article on the autism debate reports that the experts are certain ‘vaccines don’t cause autism; they don’t injure children; they are the pillar of modern public health.’ I say, ‘that’s a lie and we’re sick of it.’”

Whether you feel vaccines should be a choice rather than something mandatory, the fact remains its pretty F#$%ed up to put out misinformation that can put people’s lives in danger.  During a 2014 measles outbreak, many parents and journalist openly showed their disgust towards McCarthy’s anti vaccine jihad:

“Jenny, as outbreaks of measles, mumps and whooping cough continue to appear in the U.S.—most the result of parents refusing to vaccinate their children because of the scare stories passed around by anti-vaxxers like you—it’s just too late to play cute with the things you’ve said,” a TIME columnist wrote.

“You are either floridly, loudly, uninformedly anti-vaccine or you are the most grievously misunderstood celebrity of the modern era.”