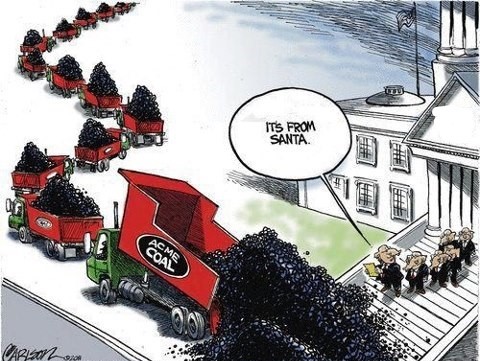 Many officials in the United States government were surprised when they woke this morning to find coal in their Christmas stockings.

The Libertarian Republic has received some leaks from the families and staff of some officials, representatives, and senators, including immediate reactions and comments.

Rumor has it Lindsey Graham claimed, “This is a direct attack on America. I believe the President should start preparing troops to land in the Arctic.” He is hoping after the President’s most recent announcement to withdraw from Syria, that we can refocus our forces to the North Pole. When asked if the Senate would approve such an action, Graham donned a dark black hood and declared, “I am the Senate!”

We heard from a source within the Alexandria Ocasio-Cortez’s office that she is, “Having all three chambers of government focus on this threat.” She believes, “This is a cat call from Santa Claus and I will not have it.” Ocasio was also asked about the 0% unemployment at the North Pole, and claims, “It is low because of elves making toys for more than one child.”

Bernie Sanders has publicly announced that he did not receive coal, but instead Economics in One Lesson. He declared, “I don’t need such a book” and then asked his butler to throw it in the fireplace at his third house. His staff says he is now drafting a bill to “establish a federal minimum gift amount” because “every child deserves a livable gift amount,” and will introduce it in 2019.

Senator-Elect Joshua Hawley from the state of Missouri says he actually woke up while Santa was at his house. In a press release, he stated, “When up the roof there arose such a clatter, I ran to the garage to grab my political ladder. I told my constituents I wouldn’t be another crony, but an endorsement from Donald Trump and Santa will surely make them look past that I’m an establishment phony. Nothing was up there for my eyes to see, except a gym membership for one ‘GOP Golden Boy,’ at which I exclaimed, ‘Hey! That’s me!’” It was later discovered that the address listed for the gym was actually a nearby coal mine.

When asking Supreme Court Judge Brett Kavanaugh if he knows why he received coal, he replied,“I don’t remember.” When asked why he doesn’t remember, he emotionally proclaimed, “I drank eggnog with my friends. Sometimes I had too much eggnog. I liked eggnog. I still like eggnog.”

Former Vice President Al Gore said, “This is Santa saying he supports global warming! I urge congress to focus on eco friendly regulations for all toy factories and flying sleighs in this coming session.” He then hopped into a private plane and headed to his town car in LA, where he will be speaking on carbon emissions.

When we asked the Clintons if they received coal, all they said in reply was, “What difference, at this point, does it make?!” As the interview concluded Hillary said “We are very sorry for any mysterious suicides, or accidents that may happen to Mr. Claus in the near future”

Since this news broke, the price of coal has dropped roughly fifty percent. It is suggested to hold on to what you currently have, and purchase more, so you have a heat source while we are in this continued chaotic state of government shutdown.

5 Reasons Why Pulling Out Is A Good Idea