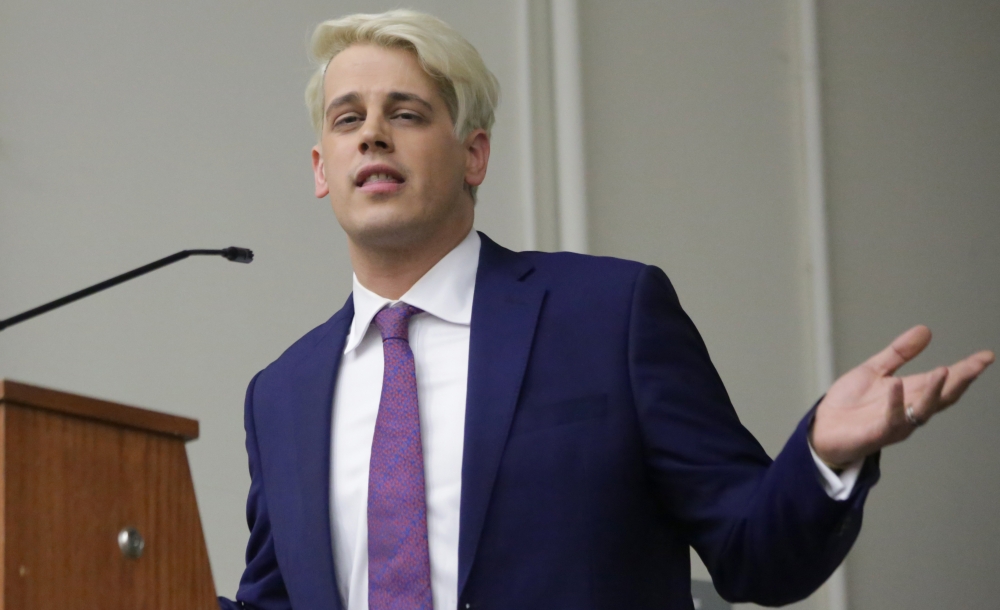 Milo Yiannopoulos was riding high at the start of February. Communist rioters and student protests prompted the University of Berkeley to cancel his speech, helping propel Milo even further into the mainstream. His book, aptly titled “Dangerous”, shot to be Amazon’s number one bestseller despite it not being published yet and just last week, he was invited to be a keynote speaker at CPAC, one of the most prestigious conservative gatherings in the United States.

But now in the wake of comments he made on two different podcasts about pedophilia, his book has been canceled, his invitation to CPAC was rescinded, and he has resigned from his senior editing role at Breitbart News. All of which forced him  to do something Tuesday, that he had never done before; apologize.

So, how did Milo rise from relative obscurity to become one of the most controversial and polarizing commentators of today? How did a man who used to debate feminists on British programming become such a rising star in the United States? And how did he fall so quickly?

Milo was relatively obscure in the United States until Gamergate. Before then, he was a tech writer focusing on start-ups and editing The Kernel a European tech journalism outlet.

Gamergate is how Milo began writing in Breitbart. He slammed the response from what he called an “army of sociopathic feminist programmers and campaigners” to gamer’s complaints about a lot of things. It’s here where he began his crusade against political correctness and what he claimed were leftist control of important institutions such as the media and universities. From here, his rise was inevitable because he was everything the left claimed to protect (besides his skin color); he was gay, a religious minority (ethnically Jewish), and an immigrant.

In a year  he was made Breitbart’s tech editor, a section that talked more about politics and campus culture than its title. He became one of the most recognizable faces of Breitbart alongside former CEO Steve Bannon and former editor at large Ben Shapiro.

His style of writing was provocative and aimed at combating everything the left portrayed. His style was not new, as he had called someone at Wired a “bitch” five years prior, but it captivated a growing audience on Breitbart and with the election in full swing, his exposure and celebrity only grew.

His columns are usually geared towards feminism, Islam, liberals, and college campuses. He called his birthday “World Patriarchy Day,” said that in order to make women happy you need to remove the pill and the washing machine, along with other provocative articles that made the left squirm and cringe. His point is to attack the “Cultural Marxism” prevalent on institutions such as college campuses.

But what made him even more famous (or infamous) was his “Dangerous Faggot Tour” which he embarked on in late 2015. Stretching all across the United States, from DePaul University to Cal Poly San Luis Obispo, he spoke topics relevant in our current political environment. It was met with loud protests, often disruptive and on the verge of violent (with UC Berkeley and the University of Washington tipping into the violent categories), which gathered him even more attention. And it wasn’t even the content of his speeches that made him famous; it was the response.

At Rutgers, feminists rubbed blood on themselves in protest. DePaul, where students threatened him physically and disrupted his speech. UCLA, where students blocked the entrance to the event. UMass, where the infamous “TrigglyPuff” appeared and was widely mocked on the internet. And the most infamous one, UC Berkeley, where rioters caused $100,000 in damages while propelling Milo to the national stage once again.

I wrote on this for my local newspaper:

“But most importantly, Yiannopoulos has become a symbol of the fight for free speech. Time and time again, liberal and progressive groups have tried to shut down his speech, further ensuring that he gains more and more support. Every time a brick is lifted against Milo, every time a protest gets violent, every time a cowardly mob blocks people from trying to hear his words, he wins.”

His tour also caused some division among libertarians. The Young Americans for Liberty, which is the largest libertarian organization on college campuses, was embroidered in this division when the UC Santa Barbara YAL chapter hosted Milo back in May. It has since been cleared up, but there remains an underlying of unease among libertarians in regards to Milo; some hate him, some love him, and people like myself, often find themselves in the middle of the road.

It is also not a coincidence that the rise of the alt-right and of Milo happened at the same time. Though Milo is not a part of the alt-right, he is not their enemy (nor their friend in some cases). In March last year, he and Allum Bokhari wrote a long profile exploring their origin and rise, along with the different intellectual strains of the alt-right such as Richard Spencer’s brand that has gotten much media attention lately. It is also not a surprise that Steve Bannon, the former CEO of Breitbart told Mother Jones in a July interview that “[Breitbart] [is]the platform for the alt-right.”

Hillary Clinton referenced his work during a campaign speech on the alt-right, which gained him even more attention. His career was boosted by the responses by liberals who did not react with reason, but with vitriol and emotional idiocy such as calling him a racist, white supremacist, lesbophobic, and transphobic. His support for Donald Trump lifted him up in the eyes of his supporters, while Hillary Clinton’s gaze brought him much more fame than she could have ever anticipated.

It was not the left who caused his downfall. It was the right. Specifically The Blaze. It was TheBlaze who first posted his comments talking about pedophilia in an article that was quickly picked up (the video itself) by the mainstream media. It was The Blaze’s Matt Walsh who wrote an article, on why conservatives needed to defend principles and not personalities. And despite backlash from Milo’s fans along with Milo’s defense, Walsh stood firm in his condemnation of Milo.

“As far as Milo is concerned, he’s obviously a disturbed person with a troubled past. Part of his child abuse advocacy stems from him attempting to rationalize his own abuse. I pray he gets the help he needs. But in the meantime, he is not equipped nor qualified to be a spokesman for the conservative cause. He never was. He was always a spokesman for his own cause, his own cult, and even before his foray into pederasty-promoting, his cult never had very much to do with anything resembling conservatism. Sure, he believes in free speech, I guess, but that’s the easy part. The more crucial point is what we do with that speech. As conservatives, our goal is to use our free speech to promote the cause of truth — especially moral truth. Milo was never an effective advocate in that regard, and never really tried to be.”

And of course Milo has responded back.

He said in a Facebook post: “I do not support pedophilia. Period. It is a vile and disgusting crime, perhaps the very worst. There are selectively edited videos doing the rounds, as part of a coordinated effort to discredit me from establishment Republicans, that suggest I am soft on the subject.

In addition, the National Review published two separate articles attacking Milo as well, such as David French writing that if “Milo’s the poster boy for free speech, then free speech will lose.” In addition, the Review’s editorial board called his invitation to CPAC a “disgrace.”

“On Monday morning, the ACU cited those recordings as its reason for rescinding Yiannopoulos’s invitation. But that Yiannopoulos did not have a place at CPAC, or at any forum that describes itself as “conservative,” should have been obvious from the start. Instead, the ACU put conservatives in a no-win situation. Had they permitted him to speak, it would have been considered a tacit endorsement of his opinions. Now, having rescinded his invitation, CPAC will be portrayed by Yiannopoulos’s many fans as one more organ of leftist-style speech-policing. Whatever happens later this week, CPAC has diminished true conservatism’s appeal.”

It is the classic battle between the new populist conservatism and the old guard conservatism and Milo was caught right in the middle of it. Of course, Milo will take advantage of it and it will help him in the long run. How? Because Milo can claim that the establishment Republicans are out to get him, which he has already done. But it does not dismiss the fact that the old guard of the conservative movement still has a lot of bite, a bite it used to help in Milo’s current free fall.

I would recommend Philip DeFranco’s breakdown of the whole controversy.

I am not going to defend or attack Milo in any regard and I’ve tried not to in this article. However, it is not astonishing to see someone rise and fall so quickly. It happens all the time. Rick Perry, Herman Cain, Mark Sanford, but it is how they bounce back which remains to be seen.

Milo is in a better position than most people to recover. He has an adoring fan base that has responded to him well, backed him up, and promise to keep supporting him. In his press conference he vowed to continue to speak on live tours similar to his “Dangerous Faggot” Tour along with hinting that his book may still be published by another publisher. He also announced he would be starting an independent media venture, which he has experience with, (The Kernel earlier this decade), and he would continue to fight. He has options, a lot better options than most people who are accused of this kind of thing have.

Milo is a fighter, no matter what side you are on. You have to admire his tenacity in the face of this kind of adversity, where both the right and left are after him. Once more, I will not attempt to defend or attack Milo in regard to his comments or his political views. But I will acknowledge his defense of free speech on college campuses along with his rise and fall.

The question now is Milo’s legacy. Will he regain his prominence? Or will he drift once more into obscurity, back to bickering with feminists on British television again? Only time will tell.

EDITOR’s NOTE: The views expressed are those of the author and are not representative of The Libertarian Republic.