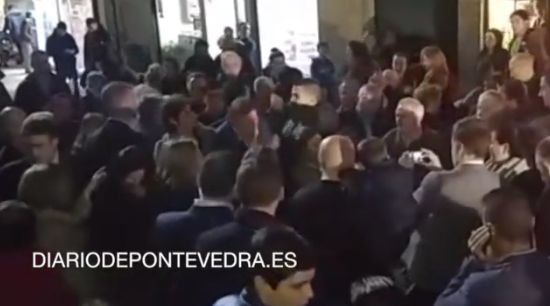 A teenager punched Spain’s conservative prime minister in the head Wednesday at a campaign event, later telling police he did it because the president “earns two salaries.”

The 17-year-old man identified as Andrés V. F. approached Prime Minister Mariano Rajoy as he was walking through a crowd of people at the campaign event. It was assumed he was interested in taking a ‘selfie’ with the prime minister. Then, all of a sudden the assailant threw a left hook which struck the prime minister on the left side of the head.

The prime minister’s assailant shouted “I’m glad I did it,” as he was escorted away by authorities.

The young man, perhaps frustrated by Spain’s 50 percent youth unemployment rate, told the police he did it because the president “earns two salaries.” According to V. F.’s attorney, the assailant’s parents are in disbelief regarding their son’s actions.

V.F. sent out a WhatsApp message to his friends before seeing the president in which he told them the president was in town and that he would attack him. V.F.’s friends replied with encouragement, stating, “Capi, [V.F.’s nickname] kill him. Put your thumbs in his eyes and spit on him.”

V.F. had previously publicly criticized the President’s political views via social media. His Twitter account, which can no longer be found, had a post on it dated Dec. 14, 2014 in which he stated: “I will attack the PP [Popular Party] headquarters.”

It has been reported that he is a distant relative of the president through the first lady.

Rajoy tweeted after the assault that he is “Feeling good.”

In spite of his bruised face, the prime minister should be “feeling good” considering that his party is leading in the polls and he is set to be reelected.

Watch: These DIY Socks Pause Netflix When You Fall Asleep