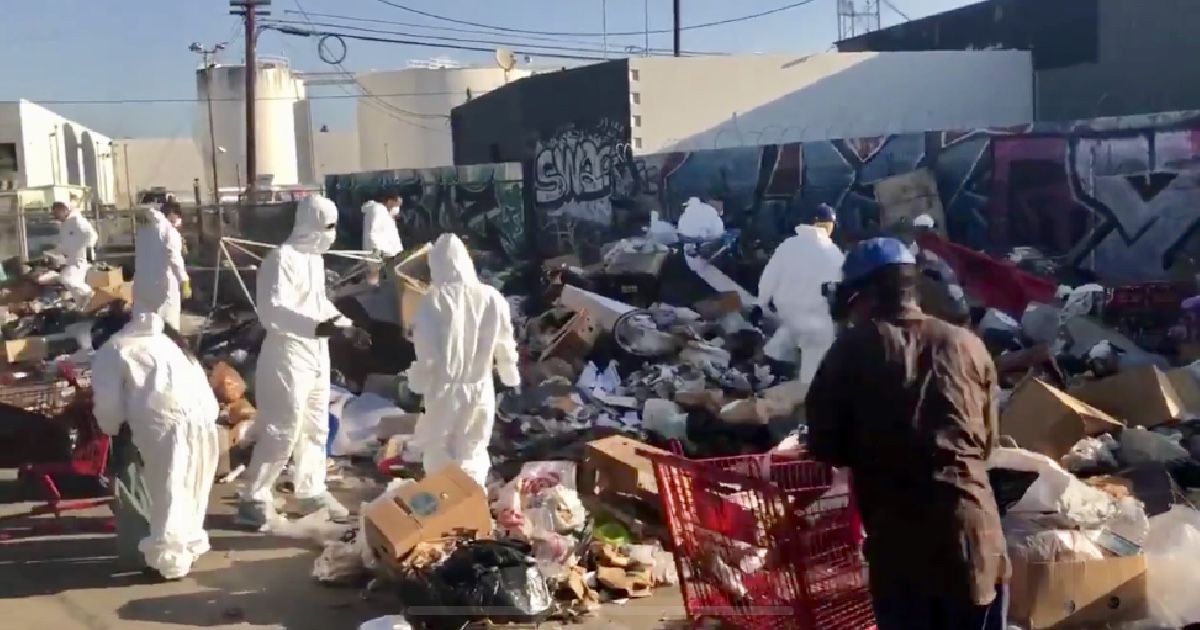 –  He estimated that his team cleared about 50 tons of trash in the community.

Conservative activist Scott Presler organized a street clean-up at a homeless camp in Los Angeles on Saturday and estimated that he and his team cleared about 50 tons of trash from the area.

Yes, this is a real homeless camp in Los Angeles. @realDonaldTrump #LosAngelesCleanup pic.twitter.com/vxRltzlOeD

The pro-Trump activist said he got a group of about 200 volunteers together in Los Angeles by using Facebook, Instagram and Twitter to get his message out and encourage people to sign up for his nine-hour cleaning haul.

His team was equipped with hazmat suits — many of which were donated — as well as masks to cover their mouths, heavy-duty gloves and safety instructions to avoid being exposed to life-threatening diseases including typhus, typhoid fever and flesh-eating bacteria.

“L.A. is completely different than Baltimore,” Presler said. “How crazy is it that it’s 2019 — not the Stone Age — and here we are, having to worry about these kinds of diseases?”

He added that the CEO of a Christian homeless shelter in Los Angeles called Union Rescue Mission, Rev. Andy Bales, inspired him to take such protective measures after reading Bales’s story about how he lost his leg to infection after stepping in human waste while helping homeless community members on Skid Row.

Why is an outsider from Northern Virginia here & not California elected leadership? #LosAngelesCleanup pic.twitter.com/yqW2pxKA3c

Presler and his team measured the trash by filling up “three 10-to-12-ton dumpsters, and the dumpsters were overflowing, and those were just the three that we filled,” plus other trash bins. In total, he said the amount of trash collected probably came to over 50 tons, but 50 even seemed like an accurate estimate.

And the hard work has a lasting impact. Presler recalled a woman living at the homeless camp he was cleaning in Los Angeles who thanked him for keeping his promise to clean up the area.

“This woman who was living in the homeless camp was wearing a beautiful black-and-white dress, and I told her she looked beautiful in it, and we just started up a conversation,” Presler said. “After a bit of talking, she said, ‘I want to thank you for keeping your promise. So many people make these promises, and they don’t keep them.’”

Presler also pointed to his time in Baltimore as an example of the long-lasting impact of his work.

After his first volunteer clean-up in the city Trump called a “disgusting, rat and rodent-infested mess,” Presler went back a week later for a second clean-up and noticed that the area he and his volunteers hit about a month prior was still clean with “very little debris.”

We are back in West Baltimore.

It’s been a month since the first cleanup & the alleys only have a little bit of debris. pic.twitter.com/hhe4vU7J5O

He recalled another woman he’d met living in the area — an 81-year-old standing at just 4 ft. 10 in. compared to his 6 ft. 5 in. — whom he made a promise to after his first Baltimore clean-up to come back again.

When Presler came back a second time, keeping his promise, he wrote the same woman a handwritten thank you note and planted flowers in her garden.

“Besides the fact we planted bulbs for her, which will grow year after year, the next time we go [to Baltimore], it will be her birthday,” he said.

Homelessness numbers in Los Angeles County increased by 12% from 2018 to 2019 with an estimated total of 58,936 people — 44,214 of which are unsheltered — according to a 2019 report by the Los Angeles Homeless Services Authority (LAHSA).

Count Me Among the Fans of Downton Abbey