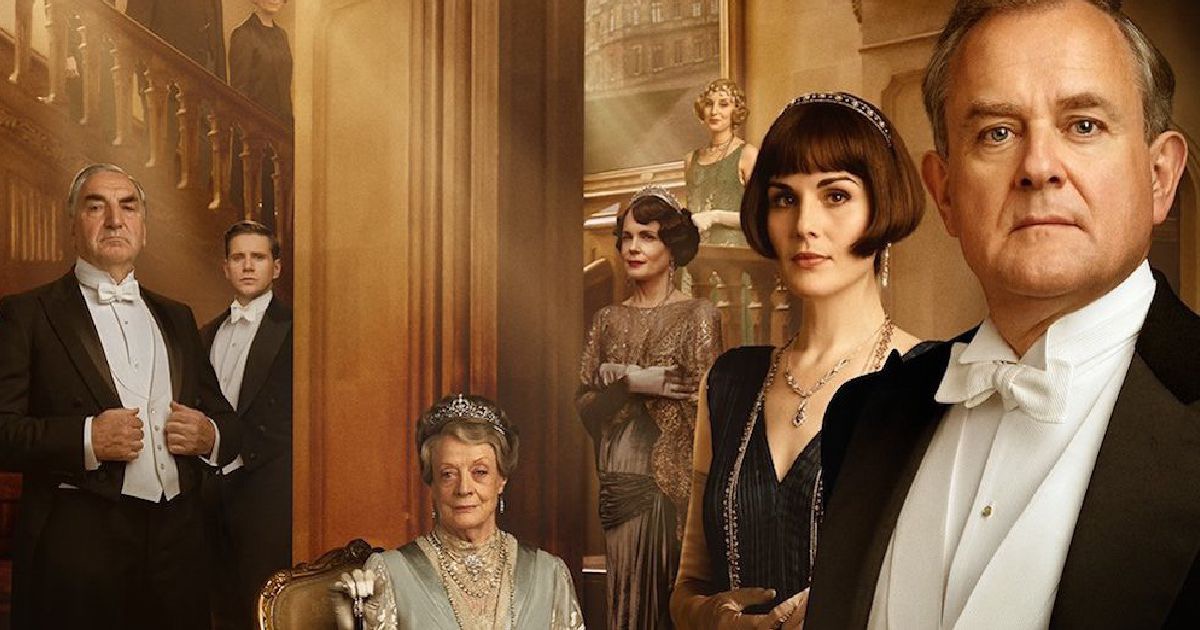 The series Downton Abbey, it’s just too long and too slow. I never wanted to commit. A 2-hour movie? That I can do. And so I did.

I’m super happy about it too. Fancy house. Stuffy people. Complicated human drama. Accents that if you listen carefully reveal a class structure. It’s often hilarious too. It’s a combination of Brideshead Revisited, The Importance of Being Earnest, and Jeeves and Wooster – in other words, everything that Americans love about the culture and private lives of the English aristocracy.

Even if none of this interests you, there is one overarching selling point: Dame Margaret Natalie Smith playing Violet Crawley, Dowager Countess of Grantham. She steals every scene with a rapturous performance of what seems to be just herself. Curiosity led me to look up the year of her birth, exactly as a gentleman should not do. 1934. You do the math.

This movie joins a massive and growing body of films that reveals a world that seems culturally familiar to us and yet we’ve never experienced in our own lifetimes. It absolutely and surely creates within every viewer a slight sense of: wow, we’ve lost too much of the manners, decorum, and ritual of the past. How can it not? The patterns of life, the subtlety, the liturgies of courtship, and funny ways in which the rules trip people up; it’s all beguiling even to us savage Americans who long ago decided that none of this stuff matters.

Also, even though we all know that this world is gone, the dramas that make up their own lives are still our dramas now. For example, in this movie, the big issue is that the king and queen of England are stopping by Downton Abbey for dinner. (As an aside, how nice to think of the rulers of the country as nothing more than fancy dinner guests! This is probably how it should be.) The staff is wildly excited to show off its skills in every aspect of house management, from proper beddings and tea to meal service and social graces.

But then a strange thing happens. The advance team from the king’s court arrives to say that the staff will not be involved at all. The main butler will be replaced. The cook too. The servers and maids, all gone. Their roles will all be performed by people more suited to the task of serving during the royal visit.

The staff of Downton contemplates the unthinkable. They will hatch a counterrevolutionary plot. They will figure out ways to distract or otherwise engage the king’s staff so that they are unable to perform their jobs and thus will the Downton staff step up and reveal their own glories. It’s not spoiling the plot to tell you that they succeed because, of course, they must! Then along the way, we have other twists and turns involving certain illicit activities that must be forgiven and then codified as part of the family structure.

But let’s jump from discussing this movie to a topic that intrigues me much more. In the Downton house we find a vast and intricate system of governance that has nothing to do with state imposition. It is an extension of history, an unfolding of applied graces and dignities evolved and enforced through norms, patterns of interaction, hard and soft rules, and etiquette. It’s governance through and through. It’s orderly and pretty to watch.

Here we associate all this with the upper class, and, in our imaginations, we associate it most fully with the higher rungs of society in England and America in the 19th century. The eye candy of the aristocracy is pure delight. But the system of governance that we create for ourselves is hardly limited to the upper classes. It exists in all areas of life.

Popular legend has it that society without a state descends into disorderly anarchy. If by anarchy you mean the absence of state management, that’s a fine word. But what we find in real-life examples of societies left alone is not disorderly but quite often the opposite. As with life at Downton Abbey, humanity has a remarkable capacity to order itself in the absence of exogenous impositions from the machinery of the state. The less the state manages us, the better we become at managing ourselves.

And how does this work? I could attempt to summarize F.A. Hayek, Albert Jay Nock, Edward Stringham, and the entire liberal tradition but, instead, I will use the example of a house party. No government is present. You issue the invitations. There are norms about the time you show up, whether guests bring food and drink, how you manage the consumption of food in common, how much people drink, what time they leave and so on. Things go wrong, as they do. But then the person isn’t invited back. New people are invited next time and they learn the ropes from people who have been before.

We are always in this adaptive state, trying to customize our behaviors and choices to make us more successful. We do this without force. We create order in order to economize on randomness. We are very good at this, often too good. Read any literature from the Victorian period in England or the Gilded Age in the US and you find people in a constant state of rebellion against the rules they created for themselves. It’s the same in Downton Abbey. The real story of anarchy – life without the state – is not one of chaos but the opposite: our failing as a civilization is that we probably have an overly competent propensity to create social systems of control from which we end up having to rebel from time to time.

So yes, I’m now a fan of Downton Abbey not because the story is particularly riveting but because it puts on display a life of decorum and rule keeping (and rule breaking) that exhibits to us in high relief what should be apparent by any close look at our own lives: we do have the capacity to govern ourselves.