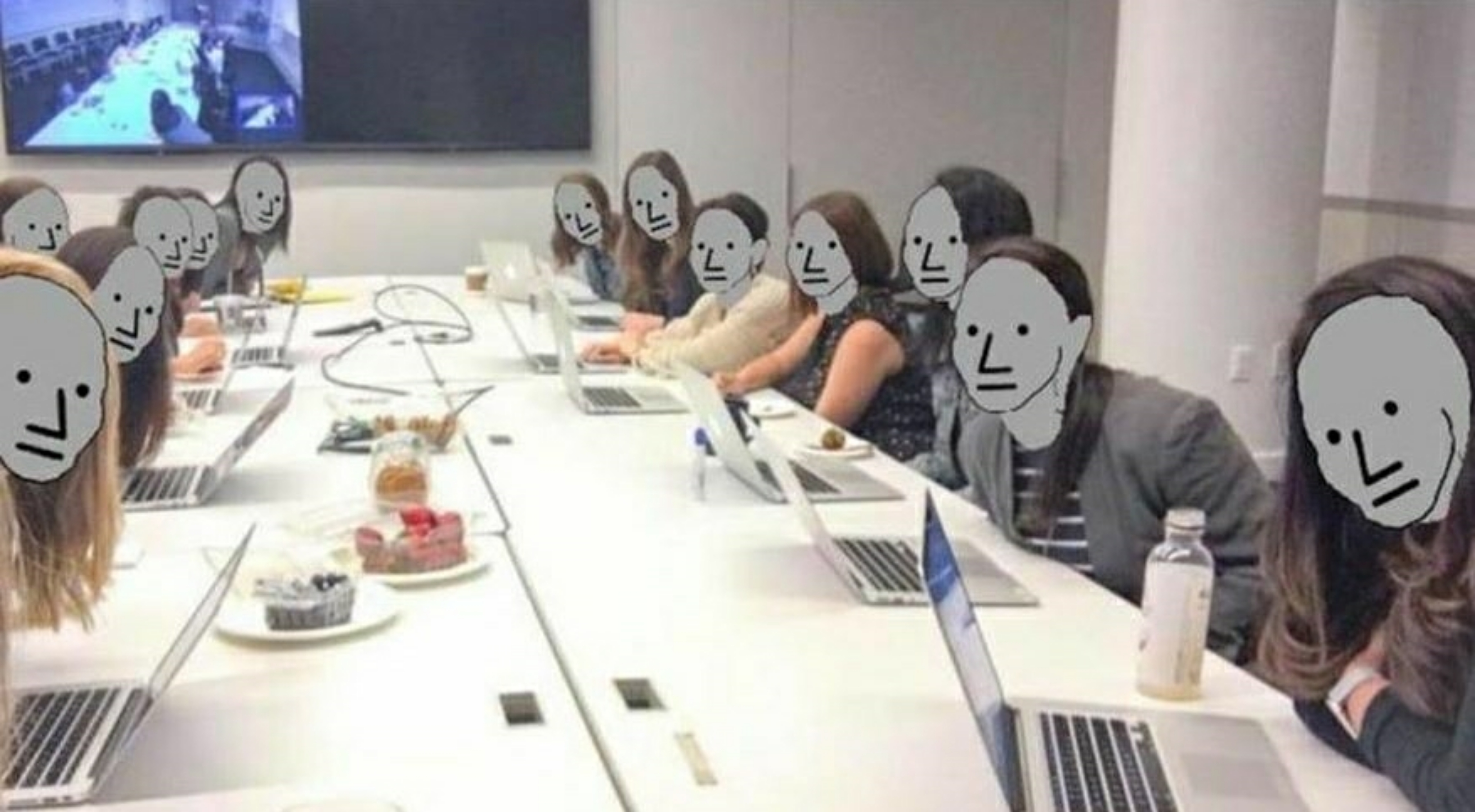 If you spend as much time on the internet as I do (which you probably shouldn’t), you’ve likely seen plenty of expressionless, crudely-drawn gray faces popping up in your various feeds lately.

A new meme has been born.

For those not up to date on the finer points of internet discourse, a “meme” is a shareable, usually humorous, piece of internet content that consists of images, video, and/or text and can be modified to fit a variety of contexts.

The most recent trending meme is known as the “NPC” meme. “NPC” is a video-gaming term that stands for “non-player character.” In a game like Fallout 4 or The Elder Scrolls V: Skyrim, NPCs (guided by their programming) wander around the game environment spouting banal, repetitive dialogue and providing players with possible quests—or target practice.

According to the meme historians at KnowYourMeme.com, the NPC concept originated two years ago when an anonymous user of the website 4chan posted a thread defining NPCs as “people who autonomously follow group thinks and social trends” such as “‘TRUMP IS HITLER’, ‘JUST BE YOURSELF’, ‘SPORTSBALL’, ‘THE NEW ADELE SONG XD OMG.’” Last month, other 4chan users revived the term to describe someone who lacks an “inner voice.”

The meme exploded, and various media outlets (including the New York Times) quickly condemned it as a “liberal-bashing,” “far-right,” “pro-Trump… insult.” Twitter accounts based on the meme quickly sprang up, and Twitter reacted by banning over 1,500 of them.

On one hand, I sympathize with what the NPC meme is trying to express. Look at the “repetitive droning statements” of these two women protesting free speech advocate Dave Rubin and try to tell me they’re thinking for themselves. Or watch this Tucker Carlson segment, in which Carlson describes a group of Kavanaugh protestors as “little robots” being programmed by their leftist overlords.

This sense of rage against conformity is beautifully expressed in the pop-punk music of the late-90s and early-2000s. Jimmy Eat World proclaimed, “Hey! You know they’re all the same,” while Good Charlotte encouraged listeners to be “out of step while they all get in line.”

While pop-punk developed largely as a reaction against Christianity and cultural conservatism (both represented, in the minds of many artists, by George W. Bush), I’ve recently been getting a lot of encouragement out of appropriating this music for my own use, turning it into a declaration that no matter how much the dominant culture might pressure me to accept their beliefs, I’ll never conform to ideas that I regard as both immoral and nonsensical.

On Mount Carmel, the prophet Elijah stood against the religious consensus of his time and mocked the idolatrous mumbo-jumbo of the Baal prophets. It’s easy for anyone who doesn’t buy into the bland cultural and political conformity of the left to do the same today.

At the same time, though, part of me agrees with those who denounce the meme as “dangerous” and “harmful.”

When I was in high school, I convinced myself that almost everyone around me was an unthinking drone and that I had a sort of elevated consciousness that I referred to as “the spark.” Reading Dostoevsky’s Crime and Punishment, the story of an egotistical young man whose belief that everyone around him is stupid and expendable leads him to commit a vicious double murder, cured me of that opinion fairly quickly.

For a more recent, and more directly applicable, example of what can happen when you regard other people as NPCs, look at HBO’s show Westworld. In that hit sci-fi drama, a theme park offers wealthy patrons what essentially amounts to a real-life video game with life-like androids playing the part of NPCs. The guests, assuming that these artificial “hosts” have no moral status, rape and murder them at will.

When the people around you aren’t real people, you can treat them however you want.

In Matthew 5:22, Jesus Christ pronounces harsh judgments against “anyone who says to a brother or sister, ‘Raca.’” Raca is an Aramaic insult that translates as “empty.” Some scholars interpret its meaning as something like “empty-head” or “dummy,” but in a recent sermon, the Anglican minister Ethan Magness suggested that raca could be a way of suggesting that the person is an “empty vessel” whose “humanity has been diminished to nothing.” In other words, an NPC.

The contrarians who share NPC memes would do well to consider the extent to which they themselves repeat ideas they’ve overheard. Blind, uncritical parroting is always annoying, whether it’s of Jordan Peterson or Lena Dunham. As Ayn Rand wrote, the only person worse than a conformist is a “fashionable non-conformist.”

NPC memes are funny and, to some extent, accurate, and they can be an excellent defense mechanism against the pressure to conform. But while we’re sharing NPC memes, let’s make sure we don’t fall prey to hubris or lose sight of the dignity and personhood of each individual, no matter how wrongheaded their ideas. When our political discourse leads us to dehumanize our opponents, violent atrocities will inevitably follow.

This post Be Careful Using the NPC Meme was originally published on Intellectual Takeout by Grayson Quay.

How Dumbed Down Education is Creating a National Security Crisis