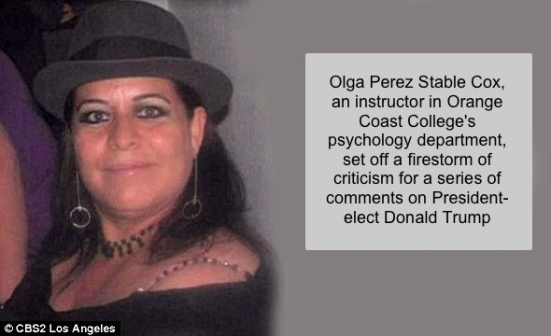 The professor of human sexuality at Orange Coast College in Southern California, who was recorded equating the election of Donald Trump to an act of terror, was chosen by the school to be the “Faculty-of-the-Year,” reports the Los Angeles Times (LA Times).

Olga Perez Stable Cox was notified of the award last week, but she declined to accept and did not want to participate in related activities, said Doug Bennett, executive director of the Orange Coast College Foundation, explained the LA Times.

The annual honor is typically received during a public ceremony, and the winner addresses the graduating class during commencement.

According to the LA Times, the college made no public announcement of the award, however students had caught wind of her nomination and had been chatting about it on social media.

OCC’s Professional Development Committee chooses the winner of the award. The committee consists of faculty members, classified staff and past recipients of the award.

Any student or faculty member can recommend a member of the faculty for the honor. The committee then gives nominees credit for their involvement on campus and evaluates their methods of teaching.

The committee does not plan to select another recipient for this year’s award, Bennett said

Stable Cox came into the spotlight after one of her students recorded a tirade following the election of Donald Trump. In her rant, she called President Trump a “white supremacist” and his election victory “an act of terrorism.” The student, Caleb O’Neil, shared the recording with the Orange Coast College Republicans club, whose president at the time, Joshua Recalde-Martinez, posted it online, reported the LA Times.

Following the video’s release, O’Neil told he would be suspended for a violation of school rules, however his suspension was eventually overturned by the Coast Community College District board of trustees.

Stable Cox was never disciplined for her actions in the video reports the LA Times. 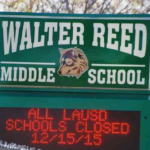 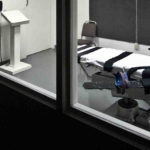 Conservative and Libertarian Georgians Should Oppose the Death Penalty