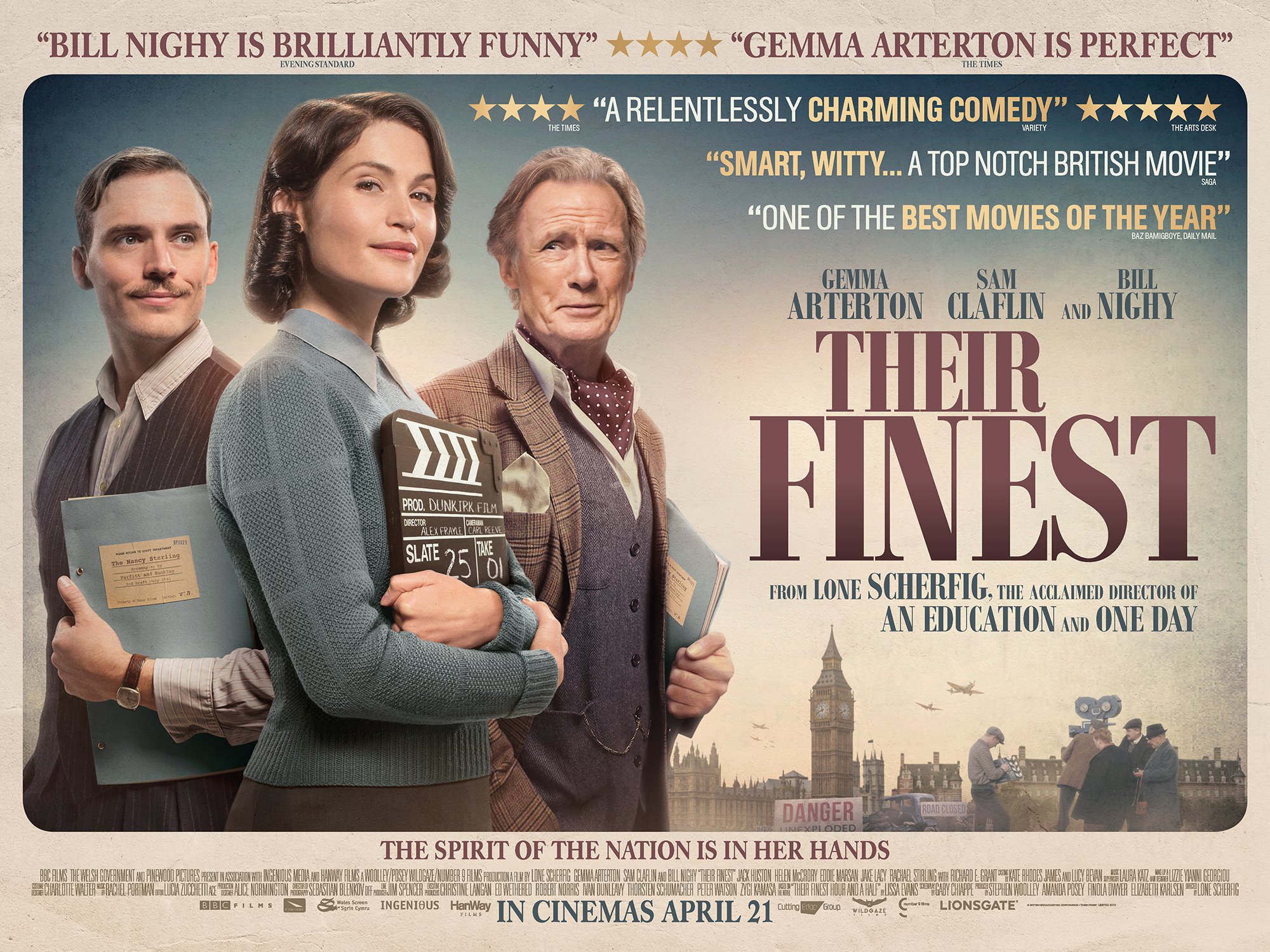 Don’t let the facts get in the way of truth, and don’t let either ruin a good story.

With this (paraphrased) dialog, the World War 2 dramedy “Their Finest” illuminates the fundamental problem with government sponsored propaganda. If the government obfuscates facts and fundamental truths in the name of a good story that will ‘support the war effort’ you have a problem.

The movie itself follows Catrin Cole (Gemma Arterton) as she’s hired by the British Information Ministry to write female dialog – or slop, as its called. She’s teamed with Tom Buckey (Sam Calfin) and they begin the process of adapting the ‘true’ story of a rescue of Allied Soldiers at Dunkirk by two lady twins and their drunken uncle in a rickety boat. 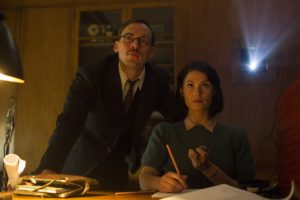 Eventually they cast Ambrose Hilliard (Bill Nighy) as their ‘name’ actor, and we’re off to the races. Catrin and Tom banter and argue about the story. Catrin wanting the female characters to have more to do than sit and look pretty, and Tom stating audiences wouldn’t believe that.

They eventually bend their vision to the demands of the British and American governments, including casting an American who can’t act.

They lock the script, and start to shoot the thing. Historically it’s exciting to see how special effects of the day were made, just how big the cameras, massive the lights, and dangerous the sets, were.

There’s also many gags, lines, and moments that ring true, and are timeless to anyone who considers themselves an artist, writer, filmmaker or a part of that community. You become a family for a very short time. You drink. You make choices for your script based on need. You fall in love. You get your heart broken. You drop your ego in the name of a good cause.

The movie is at its most alive during these scenes.

How it all turns out and if Tom and Catrin fall in love and live happily ever after, I won’t reveal. The plot rambles along as you imagine a movie like this would. The joy of it is in how that rambling happens. Little bits of dialog. Two musical numbers. A puppy dog. Their Finest doesn’t color outside the lines, but paints a vivid picture anyway.

What is it they say? A good movie isn’t what it is about, it how it is about it?

It is not about propaganda or how that effects the populace. There is no judgement made at all. Once the Dunkirk movie is out people love it, sure, but there’s no line about it galvanizing the masses or changing Britain’s morale. This is a movie about people in a situation. Not the situation itself, if that makes sense.

Thus, Their Finest is perfectly serviceable entertainment. It’s witty and heartfelt and the dialog and characterization by first-time feature writer Gaby Chiappe illicit genuine reactions of shock, humor, and sadness from the audience. Director Lone Scherfig has an eye for visual palettes that prevent the movie from looking damp and rainy all the time – as movies set in Britain sometimes do.

This movie is good. If it appeals to you, or you’re on the fence – see it, you’ll like it. if you’re only in it for the propaganda angle, you’ll be disappointed.

I was. Unfortunately for the purposes of this noble publication and its loyal audience, the concept of government manipulation of the facts is touched upon, but unaddressed by Their Finest. It’s not that kind of movie. 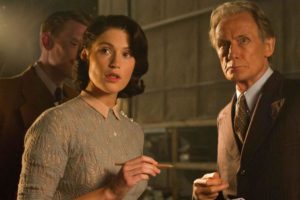 Which is a shame. There were hard arguments to be had and intense scenes to be played on the subject had the movie chosen to go in that direction. Instead we get a movie where the road to hell that’s paved with good intentions detours into positive results.

As…it sometimes does. Take for example Zero Dark Thirty. It’s an excellent (and long) film about the hunt for Osama Bin Laden. It is technically accurate to a fault thanks to the fact the CIA helped write the script.

That should raise an eyebrow. And when you consider the final, harrowing raid on Osama’s compound is the most high-tech, high-fidelity depiction of any covert operation I’ve ever seen, I’m inclined to believe the CIA were happy to help on this picture in a big, bad way.

But then it wouldn’t be the movie it is, would it?

My point is that “Their Finest” and the production of “Zero Dark Thirty” demonstrate the fact the government is more than happy to involve themselves in show-business. Not just regulating it, but creating it. Modifying it. Influencing it. It worked out for the characters in “Their Finest “and helped “Zero Dark Thirty” feel authentic as possible. But they still did it.

Is that the role of government? No.

What if they were asked? Well that’s a different story, I suppose.

I guess what I expected from “Their Finest” was a movie about these very questions and the nature of misrepresenting information for a good cause. Instead I got a movie about the magic of cinema. One is heavy, one is light, but both can be delicious and satisfying in their own ways. It is a bummer to go in expecting a decent steak and getting a good salad instead, though.

But that’s my fault. You can’t judge a movie on what you want it to be, really. For what it is – a romantic costume drama about filmmaking, it delivers what audiences want.

For Libertarians….it may disappoint, but serve as a valuable talking point. Take your mom or dad and ask some pointed questions about propaganda after. You might just win an ally for Liberty.

So, on the newly minted Libertarian Republic Movie Rating System, on a scale of Karl Marx to Ron Paul, Their Finest gets a Mark Cuban. It’s rich with personality, smart, and witty. It has an eye toward some things Libertarians would find interesting, but is much more interested in appealing, enriching, and entertaining as many people as possible – and to do that, sometimes you need to stay out of politics.