Despite his recent performance in Nevada, Pete Buttigieg has made quite the headway in the 2020 primaries, and it seems as though there is a real possibility Donald Trump might be facing off against him in November.

Admittedly, there is much to be desired from the Indiana mayor. Mayor Pete has a lot of brand recognition work to be done, given his position as a mayor of a relatively lesser known city (it’s barely in the top 5 for Indiana). His policies are rather middle-of-the-road in the current Democratic Party primaries, and yet they may prove to be just as much a hindrance as a boon should he fail to accumulate enough votes from the moderates given his lack of radical appeal. This may prove to be even worse in the general election.

Good presidential candidates are hard to find these days, but here are six that would be far better than Buttigieg:

The Republican Congressman from Kentucky is certainly a top pick not just in comparison to Buttigieg, but as a whole. Having literally described Washington D.C. as “Mordor”, his mindset hearkens back to a Calvin Coolidge style of disdain for the acts of government. Congressman Massie would be a welcome change with his desire to open private competition, where most Democrats in the running say “what if Government ran this?”. Internationally, we would also perform better with a Massie presidency given his dedication to free market energy solutions, trade deregulation, and non-interventionist foreign policy .

An MIT graduate, Massie would have no problems bringing the White House into the digital age, and would be a very good pick for technologically knowledgeable leadership that could at the very least properly explain how to wipe a hard drive. In an era where cyberattacks are just as much if not more dangerous than physical attacks, it would be in America’s best interest to have a leader cognizant of that reality and better able to enact policy that would benefit national security while also being considerate of the rights of American citizens. It may seem like this would be easy to implement, but given the current policy is “spy on literally everybody until we find crime”, the reality is much more bleak.

Hailing from the land of ‘live free or die’, the New Hampshire governor is a fine pick, having led his state to extreme productivity and growth since being elected to office in 2016. A more modern man of the Republican Party, he has no qualms with being concerned for the environment. In fact, he’s an environmental engineer. Another one of Governor Sununu’s positives is the Recovery Friendly Workplace Initiative, thanks to which a roadway is being paved toward approaching addiction as a disease to be treated rather than a crime to be stigmatized. He’s also worked on cultivating adoption, families, and other solutions to contemporary social issues. For the concerned individual, Sununu is your quintessential non-discriminatory moderate Republican, and his appeal isn’t just in civil matters either. Thanks to his policy on taxes and business regulation, there’s also been widespread growth as the New Hampshire economy chugs along in salubrious advance. Ultimately, all of Mr. Sununu’s efforts have been fruitful, and New Hampshire is now one of the nicest places to live in all of the United States (in fact it’s #2).

I may have my gripes with the honorable Congressman from Michigan for his involvement in senseless impeachment and abandonment of the Republican Party, but ultimately I can’t disagree with his policy positions. As a Republican, Amash served as a Congressman in the Michigan House of Congress from 2009 to 2011 before running in 2010 to handily win Michigan’s 3rd District, serving in that seat to this day. His approval is quite favorable too, with elections turning out much better than might be expected considering his having been at ends with Republican Party leadership the entire time. For perspective, this is difficult to do given the House’s ironclad authority and power distribution.

As chairman of the House Liberty Caucus, Amash runs a fairly tight ship, having been able to at least personally maintain Tea Party levels of fulmination well after the movement’s post-2016 slump. Plus, with his approach to privatization, there would be a massive decrease in the cost of services should he be able to implement smart and efficient regulatory policy, that instead of roadblocking development would  allow cost alleviation via private alternatives (such as charter schools). Red tape would become a thing of distant memory – or at the very least an endangered species.

This principled behavior is what sets him above the rest as someone who is truly concerned for the American people, even if it means he does things that are extremely frustrating. Considering Mr. Amash might vie for a 2024 ticket for the Libertarian Party, a rivalry between the two could actually arise.

Played college ball, don’t you know? Could’ve gone pro if he hadn’t joined the…World Wrestling Federation. Glenn Jacobs is an All-American guy, and a prime example of someone who can represent American strength and might, both physically, philosophically, and politically.

You might know him from WWE, where he partook in the pandemonium as none other than “Kane” from 1995 up until 2016. Now, Mr. Jacobs is the Mayor of Knox County, Tennessee and thus has about the same level of qualification politically. Although relatively new to life as an elected official, his tenacity and principled (daresay hyper-American) views make up for lack of experience. His stances on small government and liberty would be a welcome change in the White House, especially when considering his stances on taxes. There’s also the added bonus of the meme material of a WWE wrestler being elected to office, since this is probably the closest we could ever get to electing a real life Senator Armstrong.

You might argue that putting Mayor Max on this list is unfair to Mayor Pete. That a dog can’t be president and that no amount of joking or libertarian cynicism will say otherwise, but honestly just look at this good boy. 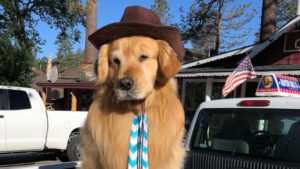 He’s adorable, the kind of good dog that everyone wants to pet and the drive-thru wants to give those little treats. After the amount of division and conflict this country has been going through, four or eight years of the adorable President Maximus Mueller II might be just what we need, after all. I mean, what world leader wouldn’t have their icy heart melted by this best of puppers?

Look, I’m no socialist nor an advocate of universal basic income, but between the guy who’s going to give me a cool easy $1000 a month or Buttigieg’s milquetoast Democrat offerings, the choice is pretty easy. The truth of the matter is that between the two, at least one can skate. But really, the actual differences worth noting are Yang’s more acceptable view of leaving minimum wage up to the states (then at least it’ll cease in some states) versus that of Pete’s $15 minimum wage notion. Yang is also more realistic about college, one of the only Democrats who, up until his departure from the race, actually opposed “free college”. Andrew Yang will truly be missed both for his absolutely scattershot interesting (albeit sometime insane) ideas and for being glorious meme fuel. See you, space cowboy…