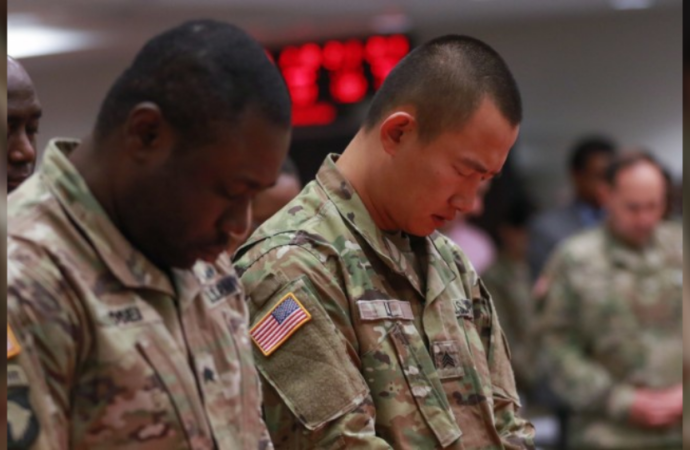 I recently had a chance to read a thoughtful and compelling article by Laurence Vance, “Why Christians Should Not Pray for the Troops”.  The article was both insightful as it was timely for our present world situation.

Having spent portions of three decades in the military, with multiple military operations to my credit (no longer wars since our Congress hasn’t declared war on any country since World War II), I see many parallels to the operations I was involved in and current missions, conflicts or adventures.  Since American military forces no longer battle enemies real or perceived on American soil, the US military has become a defacto expeditionary force to exact the will of the current administration or special interest group promoting military action.

Our misadventures overseas, under the aegis of the all-encompassing national security banner, have cost the US dearly in financial terms, human lives, and our ability to have any sort of coherent foreign policy.  Oftentimes, our overseas adventures have been rationalized by some type of statement about “better to fight them over there than in our owns streets.”  No amount of calculation can discern how much resentment and loathing has resulted from our occupations of various countries, nor can one accurately determine what that resentment will produce.

Once, America was seen as a gentle and beneficent giant who could be counted on to do the altruistic good for others at sometimes great cost.  Now, in the 21st century, many nations view us as an interloper or usurper.  No longer can we justify unwanted occupations or aerial adventures such as drone strikes as in the best interests of the affected country or just because we can.

The US has spent trillions on foolish globalist adventures and more are in the offing.  Is America any safer, more secure, or richer for a myriad of expeditionary ventures?  Of course it isn’t.  Who has benefitted from our expansionist and imperial adventures?  Certainly an entrenched military  bureaucracy (Pentagon and litany of flag officers) and plainly the “defense” industries.  It is also very helpful to political parties and politicians (situationally) and various lobbying concerns throughout the D.C. Beltway.

America needs to reorganize its military forces in lieu of building giant temples (bloated military budgets), and design a military force structure needed to defend the USA sans extensive foreign debacles. We can fully defend the US with a much lesser budget if not fighting wars for others, for corporate profits and control, and political interference in other countries’ affairs.

Should Christians pray for the troops?  Yes. Pray we bring them home and stop the foolishness of foreign entanglements.

Rik Combs is a retired United States Air Force fighter jet pilot. He served in the USAF for three decades. Rik now resides in Jefferson City, Missouri where he is a Libertarian candidate for governor. He is active in his community and can frequently be heard on the KWOS Morning Show as a guest host and contributor. You can learn more about Rik and his campaign at CombsForMissouri.org.