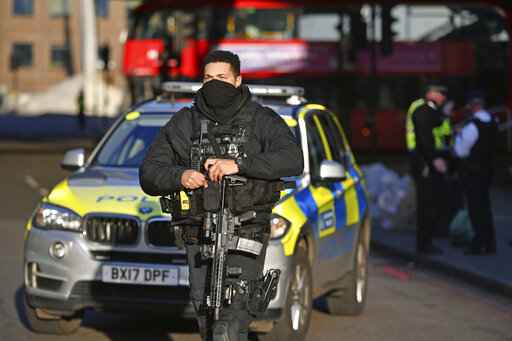 Several people were stabbed Friday near the London Bridge in England and police shot the suspect dead, according to Metropolitan Police Assistant Commissioner Neil Basu.

Police confirmed the man they shot died at the scene after several people were stabbed. Authorities are treating the incident as a terrorist attack and the man had a fake explosive device, Basu said. Parts of London remain shut down as police continue to investigate.

“As you would expect due to the nature of the incident, we responded as though this was terrorist related. I’m now in a position to confirm that it has been declared a terrorist incident,” Basu said during a press conference, adding that authorities do not know a motive.

“However, I can confirm at this time, we believe a device that was strapped to the body of the suspect is a hoax explosive device. Officers continue to carry out meticulous searches in the area to ensure there is no outstanding threat to the public,” Basu said.

Officers responded to the area after reports of “a stabbing.” Witnesses nearby said they heard gunshots, and Sky News reported that police shot the alleged stabber, according to The Associated Press.

Earlier Friday, the Metropolitan Police force tweeted it was “dealing with an incident at London Bridge.” A BBC reporter also said he heard gunshots, backing up early witness reports.

We are in the early stages of dealing with an incident at London Bridge. Please follow @metpoliceuk for updates. If you are near the scene, please follow the directions of any officer on the ground.

Video footage showed police aiming their weapons at a person on the ground, NBC News confirmed.

“We have now declared a major incident and have a number of crews at the scene in London Bridge,” London Ambulance Service tweeted.

John McAfee Tutorial: What to Do If a Cop Plants Drugs on You