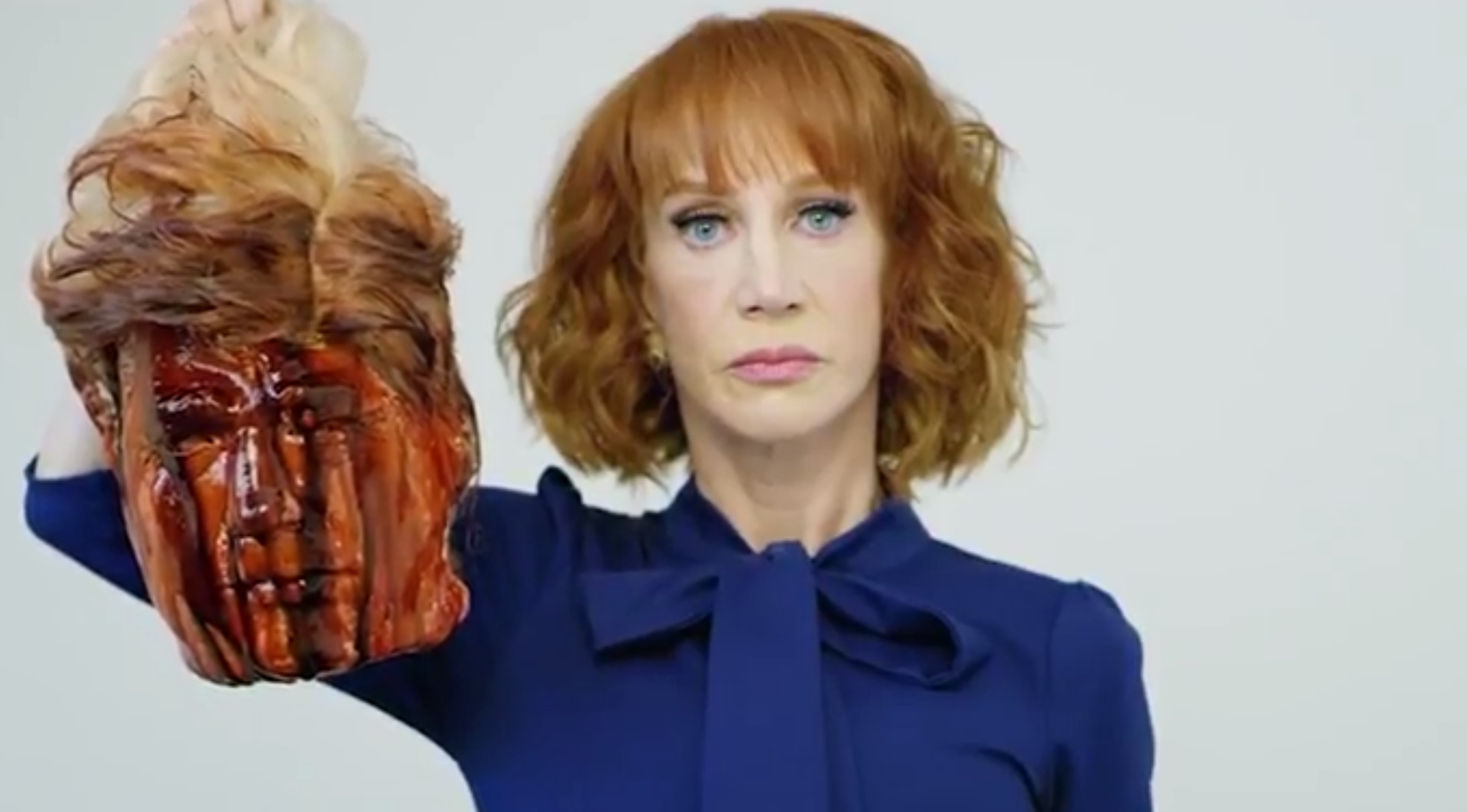 I cannot begin to imagine who thought it was a good idea to have famed D-list comedian Kathy Griffin hold up a bloodied and severed Donald Trump head in a 12 second video today, but they’re either getting a raise or getting fired.

By now you’ve read or seen the infamous polaroid, which features ominous music and Mz. Griffin holding up the head before the video ends. It’s…really spooky, creepy, and I suppose funny in a “WTF was that?!” sort of way.

The ‘project’ was…ahem…spearheaded by “Hollywood’s Favorite Photographer” Tyler Shields. The actual plan for the project remains to be seen. It was a teaser.

Look, there’s no way you’re going to get me to denounce any form of art project or comedy project, unless it’s something really, really weird like Tony Podesta’s collection.

But I do see how people can find this absolutely abhorrent. We’re used to having the President be disrespected, but rarely via such violent means. In fact this is the third instance of Mr. Trump being beheaded – first it was a photo tweeted by George Lopez. also an issue of Spawn Kills Everyone featured our 45th President’s big loud mouth (and head) being separated from his body again.

But I think there is some consideration here. At the risk of sounding like a rapist’s defense attorney, President Trump was kinda sorta asking for it, ya know? Donald Trump has been nothing like other Presidents. Routinely calling out celebrities, comedians, other politicians in a mean-spirited and cruel way; ultimately lowering the bar of Presidential discourse to the point that you’re likely to stumble over the damn thing in the dark.

On top of that I think people are excited to have a President they can make fun of again. With former President Barack Obama being African American, most anything a person could poke fun at – his appearance, his background, his manner of speaking, could and would likely generate calls of racism. Except for his ears. You could make fun of his ears.

So now that we have a fat, white, balding, orange, boar of a President? Game On! It’s as if all the pent up fun-making is coming out. Folks refer to him as ’45’, call him any number of names, claim he has Alzheimers and hemorrhoids thanks to his sitting style. All aboard the Trump hate Hard On, there’s room for everyone!

Donald Trump is the opposite of literally all those things and white. The gloves are off, the knuckles are pointy, and the man is taking a beating. If you’re the President of the United States, you have to expect to get back what you put out times ten. What is it they say about keeping your words soft and sweet?

Ultimately, my point is this; We really need to stop getting upset when entertainers do stupid or silly or shocking things to, well, shock us. Kathy Griffin is a woman who routinely gets under Anderson Cooper’s skin every year while showing her own skin by taking her clothes off. She lives for this stuff.

You could, I suppose, get angry at the media for not lambasting Griffin about this, but that’s not what we want anyway. We want fairness. And this beheaded Trump photoshoot is only a problem because we know it would have been an issue when President Obama was in charge.

Should it have been a problem then if it happened? No. And to demand it to be a problem now, because it would have been one back then, is self defeating, petty, and useless. Regressive, if you will.

Besides, it looks a lot more natural than whatever the hell spray-on tan he uses.

Need a DUI Attorney? Here’s how to choose one…