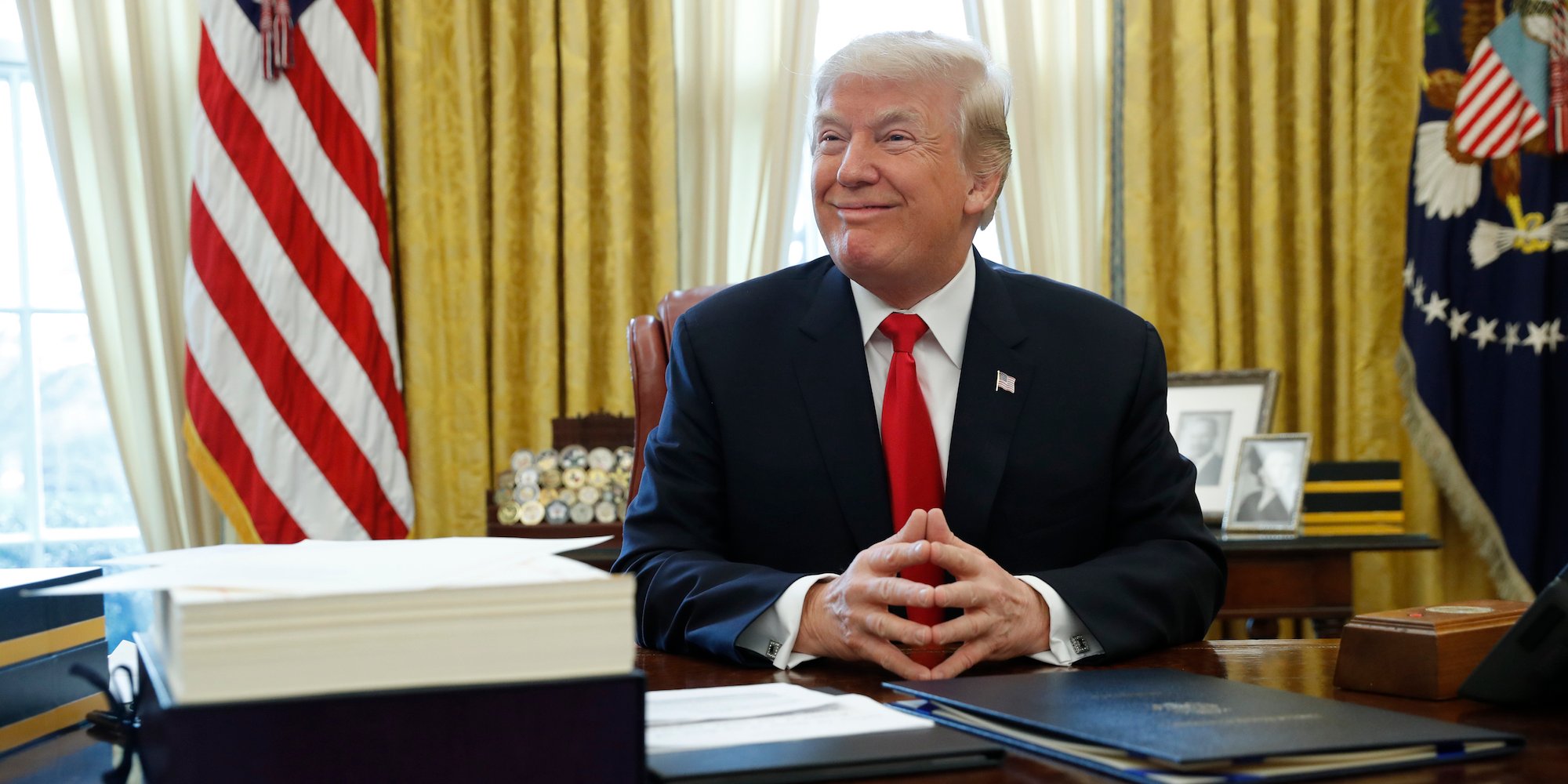 Today, Trump signed into law the most consequential tax reform bill in decades.

The left should applaud.

I say this not because it benefits them in the real world (especially if they live in blue states that may lose some local and state tax deductions), but because it’s consistent with their own philosophy. In making this case, I’m not trying purely for flippancy, nor do I think it’s biting off more than I can chew in my attempts to steel-man every side I can before picking one.

There are plenty of reasons to oppose the bill from the right, from the left, or from the center. The most convincing reason is that tax cuts are not linked to spending cuts, and the imbalance adds to the debt and deficit. However, this argument is completely laughable from the left, who spent nearly a decade arguing Cheney’s point that deficits and debt didn’t matter, and that Republican fixation on these numbers was just an excuse for them to be racist. The Republican bill is expected to add roughly a trillion to the debt over the next decade, but there were several Obama years with a Democrat congress where we saw a greater increase in a single year.

So, obviously the debt cannot be much of a concern in this hypothetical argument from the left, so we’ll have to “move on” from that consideration.

Sure, there’s plenty of changes to income taxes in this bill that progressives should love, like people who are rich enough to afford $750,000 homes not being able to deduct those homes on their taxes, and benefits to children, the poor, and the middle class. But without equal, the largest change to the tax code is a decrease in the corporate tax rate, something the left should obviously oppose automatically without a second thought, right?

Actually, the opposite is true.

Leave aside the fact that the average corporate tax rate in Europe is about 18.7% while yesterday ours was 35%, the highest in the industrial world (only the African nation of Chad and the UAE have higher rates than the US). Europe may be a leftist paradise, but maybe they got this one wrong for once. Leave aside the need to compete for business–competition is an evil capitalist construct, and so is free trade. Instead of examples from anything closer to utopia like how corporate taxes are lower in Scandinavian countries, maybe we should start with base assumptions.

What are corporations, and what is taxed with corporate taxes? Well, we’ve heard all of the left’s assurances that “corporations aren’t people”, and that’s entirely correct. They’re actually associations–assemblies of people who have voluntarily come together for a common purpose–most often making money. They include everyone from the owners (often individual shareholders made up of everyone from the high rolling traders to, more common, those with any money in 401(k)s and other retirement accounts, a large chunk resting with retirees), to the laborers to the salesmen and CEOs to the janitors.

When government taxes corporate earnings, within limits it’s the corporations who decide who pays the tax. Theoretically, I guess corporations could try to pay it through cutting sharply the salaries of it’s CEOs and the pay of those who are making the decisions of how to pay Uncle Sam before taking from other parts of the business (though that seems counter-intuitive, especially to leftist thoughts about how greedy these decision makers are). But of course, these are selfish greedy fat cats who want to keep all the wealth at the top and screw the rest of the world. So what are their options for paying using money that rightfully belongs to the poor?

They could keep prices high enough to cover it, making consumers pay the tax, even when it’s necessities that the poor need to live. They could limit wages of their more “common” workers, or benefits and bonuses of their lower and middle class employees that the unions fought so hard to directly provide. They could merely limit the amount of money they’re investing in new products or factories, sacrificing innovation and progress in order to help the government get it’s cut, including any advances in “green” technology. They could sacrifice any kind of savings they have that could let wall street survive without bailouts from main street if it all goes belly-up again by shoring up their greedy enterprise.

With the income tax, government determines rates, exemptions, and every little detail governing payments. In fact, it’s become so good at doing so that the top 1% pay 40% of all income taxes, while the bottom half pay no income taxes in the most progressive income tax code in the entire world. The bottom 40% on average not only escape having to pay income tax, but they even get money back, on average over $600 a year. Government decides what the right amounts of income tax payments are, for who, based primarily on class, and distributes wealth accordingly.

But essentially, with the corporate tax, governments outsource the decision of who pays taxes… to corporations. You would think that those on the left who instinctively trust government and distrust corporations would be completely opposed to the government making corporations tax collectors and allowing them to set tax rates within their spheres of influence.