The letter in question called on Reid to conduct a full ethics review of then-President-elect Barack Obama’s cabinet appointees before hearings take place.

Our requests are eminently reasonable, shared by leaders of both parties. I’ll return this letter to @SenateMajLdr with the same requests. pic.twitter.com/IMT7ZtJFjV 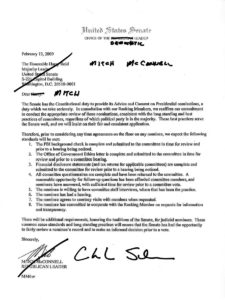 Schumer made just a few changes to the note: crossed out Reid’s name and replaced it with McConnell’s, swapped out Republican for Democrat, and replaced his name where McConnell’s signature once was at the bottom.  The minority leader then took to social media to share his work.

Democrats in the upper chamber have repeatedly called on Republicans to push back the timeline of the confirmation hearings.

McConnell brushed off their push, calling on them not to stall the process.

“Everybody will be properly vetted as they have been in the past,” he said following a meeting with Trump Monday morning.