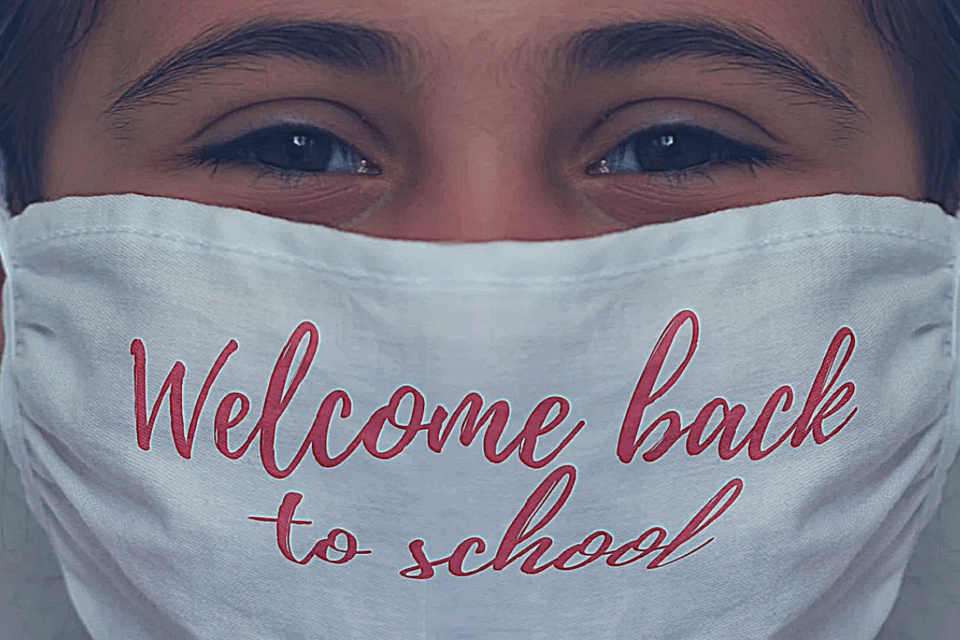 School is back in session! Or is it? What students are enduring to secure federal dollars is not and should not be considered ‘school’. Few, if any, of the excessive guidelines set by the CDC and local school boards were created with students in mind.

While we can all agree this is a complicated situation, many of the nation’s public schools went with a one-size-fits-all solution. The problem is that one size never fits all.

Schools across the US chose to begin the 20/21 school year with remote ‘learning’, or ‘virtual schooling’. This settles some minds, as it would mean students would mostly do school work online rather than on campus; it also leaves parents trying to juggle work and being a teacher. Many parents are feeling frustrated and confused by the plethora of programs students must use. Although students would not be on campus in this scenario, teachers would teach from their classrooms, in many cases.

Another solution many schools went with was a hybrid schedule. This schedule splits students into groups. Each group does some remote learning and some in-person learning. The hybrid schedule lacks stability and routine. While many like to answer with “school is not daycare,” there are many families struggling to make ends meet. Not all jobs offer the flexibility it takes for kids to go to school some days and not others. This has left parents feeling hopeless and some have even lost their jobs trying to figure it out. Teachers are still exposed to the same students just as with a normal in-person schedule, just on different days of the week. This is senseless. Kids are struggling. Parents are struggling. Even Doctor Cade Brumley admitted that he can’t help but think hybrid and remote learning are not completely successful.

While in-person learning seems ideal, most of the schools allowing it have implemented guidelines that destroy all sense of normalcy. Some schools have mandated masks for all grades. Imagine being five years old and uneasy about your mom dropping you off to strangers for the first day of kindergarten. She is not allowed to walk you to your class. As you exit the car, you are taken by people you have never met. They are all wearing masks. They immediately put a temperature gun in your face. You make your way to your classroom. While you may be upset or nervous, you have to keep a distance. There is no comforting hug. You cannot even see a reassuring smile. Can you imagine how frightening and lonely this must feel?

Some schools have not mandated masks for younger students. They recognized the unrealistic expectation that would come with younger children being forced to keep their faces covered at all times. One school in Louisiana had students walking with their arms out like zombies to keep a distance from other students.

Unfortunately, the majority of schools also insist teachers wear masks. This puts students struggling with speech at a disadvantage, hindering students who may not qualify for therapy, but still depend on seeing the mouth to understand a word and how to pronounce it. Masks are a disservice to anyone who struggles with hearing. Communication is an important part of social and emotional development, but it does not seem as if these things were considered before guidelines were written.

Not only are children having to accommodate the fear mongering of the adults by wearing masks and being treated as lepers, but they are also missing out on important things such as graduation, prom, dances, ring ceremonies, and sports.

While there are many sports in high school, football is front and center right now. States already allowing students to play include Texas, Arkansas, Tennessee, Florida, Georgia, Mississippi, Oklahoma, and Alabama. States that should be playing soon include Kentucky and South Carolina. Louisiana, however, is not playing and had a hearing about it on September 4th.

(Update: it was decided that Louisiana schools would move up the start of the football season to Oct. 1-3.)

One concerned citizen is Shane Evans. Not only is he a father who was once a coach himself, but he is the Chief of Investigations for the East Baton Rouge Coroner’s Office. In a letter to the members of the Louisiana House Committee on Education, he explained that the data “does not connect high school sports with serious illness or death due to Covid, but it is clear that taking our kids out of contact with their coaches and competition is detrimental”. As the letter indicates, the date does show that teen homicide victims have more than doubled so far in comparison to last year. It also shows 90 overdose deaths between January 1 and September 3 of 2019, whereas 2020 year-to-date is already at 166 with several pending toxicology.

Shane Evans continued “I hope they understand, if they cancel football, those kids are still going to gather on the weekends”. While some may not understand the importance of staying in shape and the discipline kids get from sports, Shane Evans hit the nail on the head when he added that sports “keep kids out of trouble”. 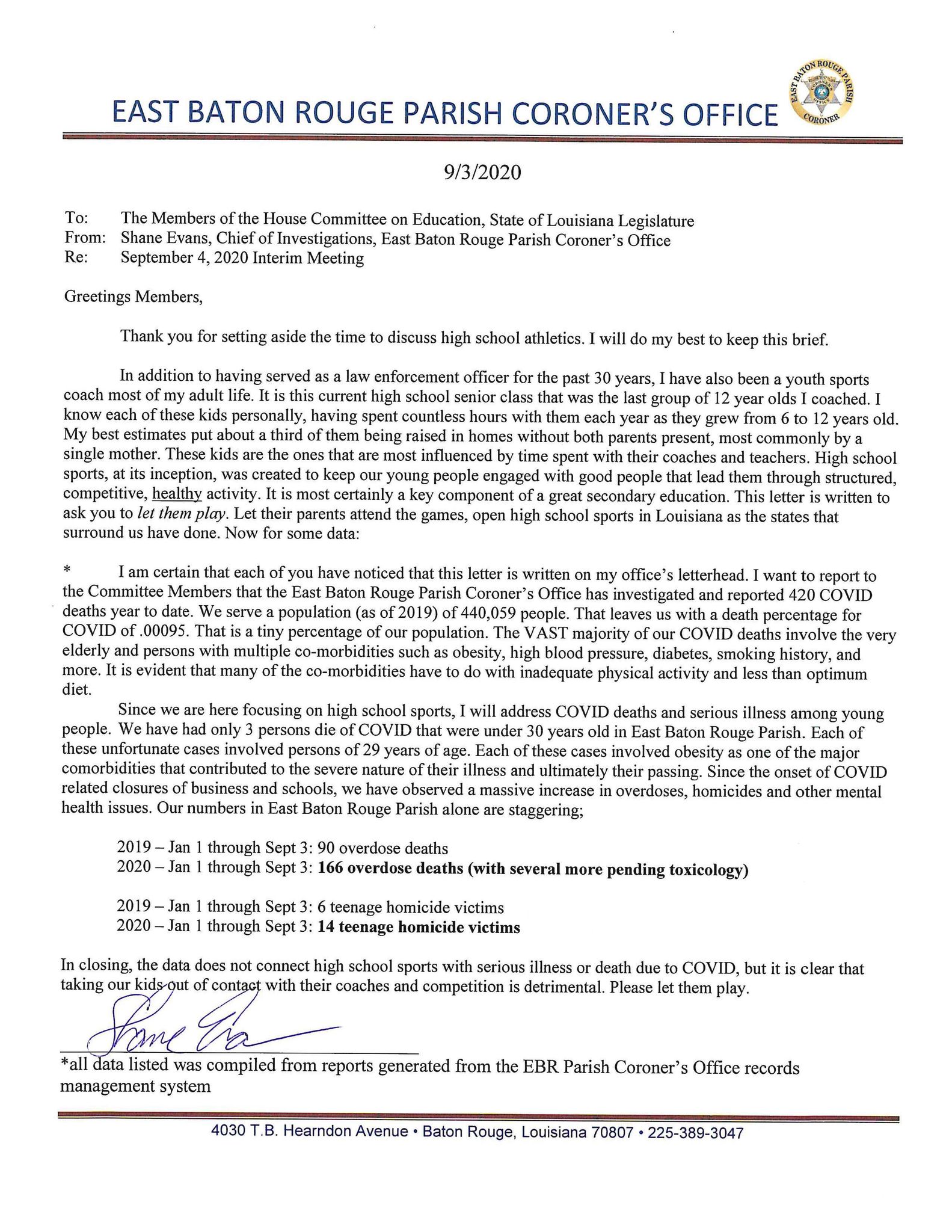 Countless parents have decided that the things being advertised as ‘The New Normal’ simply are not normal enough. Pictures have been circulating on social media of children spaced out in lunchrooms, masks on playgrounds, and students having to play alone if at all. This ‘new normal’ does not allow the “socialization” people give public schools credit for. If masks work well enough to mandate them, things should be otherwise normal. Instead of striving for a sense of ‘normalcy’, decisions were made without considering how students are impacted by Covid. There has been little to no data on what emotional and mental impact these guidelines will have on children. The majority of these decisions were made by people not involved in these children’s lives or even the communities they live in.

Sadly, even the most concerned parents have had no say. In Louisiana, when it came to parents trying to speak up for their children, they were told to mask up or get out (1:38:36). I was one of those parents who showed up at committee hearings to speak on behalf of my child who struggles with speech. Wearing a mask to explain how masks will not work in certain situations would have taken away from the point being made. A mask would have hindered an attempt to show those present how words are formed, and how even adults rely on seeing the mouth when listening to someone speak. Even when we offered to socially distance, we were told to put on a mask or leave. Instead of the Louisiana Board of Elementary and Secondary Education listening to the concerns of parents, they had us escorted out by six officers (1:41:06). The meeting continued and the guidelines were approved, including mandating masks in schools.

On the KWOS Morning Show, Nancy Pendergrass mentioned that a Missouri survey showed that 70% were in favor of in-person schooling. Even still, that district went to virtual learning. These things were decided out of fear that students would spread Covid-19 to teachers. This is another example of how decisions were made without considering the children or those funding these schools—the taxpayers.

Reason Foundation’s Director of School Choice, Corey A. DeAngelis, has shared polls and studies showing a rather large shift from public school to other options such as home school, private school, and micro school.

The Gallup poll finds that public school enrollment will drop from 83% to 76%.

That would be about 3.5 million students leaving public schools. pic.twitter.com/anUMYmT7Hr

One county in Florida that refused in-person learning had an enrollment drop of about 7,600 students. Dallas, Texas has seen enrollment drop about 3.6 percent from last year. Corey A. DeAngelis went on to share other polls/surveys showing national numbers. One showed home school doubling from 5% to 10%. The Gallup numbers DeAngelis shared showed public school enrollment dropping from 83% to 76%. As he explained in his post, this would be about 3.5 million leaving public school. While there are undoubtedly numerous reasons for this shift, one cannot ignore the fact that a lot of parents are simply fed up.

With all that is going on, a few phrases we often hear are, “please be patient”, “everything is subject to change”, and “this is a fluid situation”. Yet, they have shown zero patience and understanding for parents and students. Communities are asked to fund, support, and sing the praises of school systems that refused to consider their legitimate concerns.

As our government tries to force their “New Normal” on families, it seems parents are choosing their own “New Normal”. Parents have gone with the flow for too long. They have put faith in a system that has put their children last. Students have become nothing more than money signs sitting in a desk—and they can’t even sit in the desks anymore.

The only way parents will be heard is by removing their students from public schools and shrinking their funding. Money talks. It will be interesting to see what school looks like over the next few years. What will it really mean when we hear the phrase “school is back in session”? 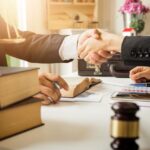 How Much Do Lawyers Take From a Settlement? 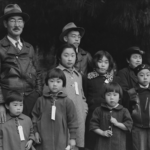